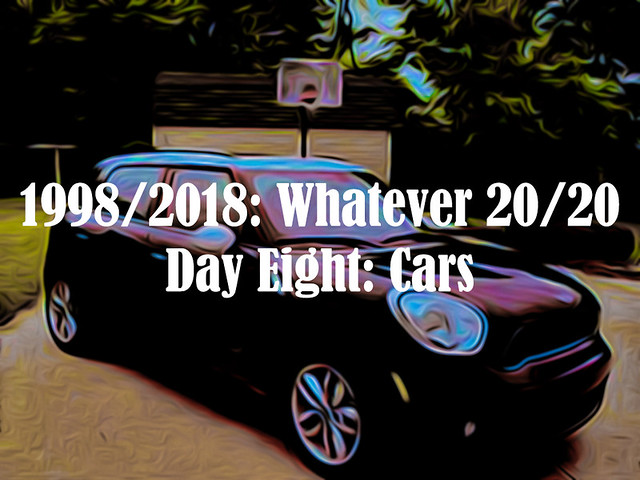 For the weekend Whatever 20/20s, I’ve picked some topics I can be brief on, because, hey, it’s the weekend. Thus, for today, let me talk about my extremely boring history of cars.

In 1998, I was still driving the very first car I ever owned: a white 1989 Ford Escort, which was a “Pony Edition” of that model. This meant it was even more cheaply built and constructed than the average Escort of the time. And you know what? I loved it. Why? Because I bought it for just $4,000 in 1991, it was super-cheap to maintain and drive, and because I was someone who fundamentally didn’t care about cars, in terms of their look or the status they might confer. I saw a car as a thing to get me from point a to point b as reliably and cheaply as possible. The Escort certainly did that. I drove it for twelve years, until it died literally in the parking lot of the dealership were I got its replacement, in 2003.

The fact I drove it for a dozen years confused some friends of mine. As I remember one of them telling me, in 1999 or so, “Dude. You can afford a better car.” And well. Certainly by that time I could have had a different car. But “better” is a subjective thing. The Escort ran and was cheap and I didn’t care about anything else, so in that respect it was the best car for me. I didn’t want to spend more money on a car, even if I could afford it. One of the ways I got to point of being able to afford things was not spending foolishly. I drove that car exactly to the point of it not being drivable. And then I got a new one.

Which was a minivan! A 2003 Honda Odyssey, to be exact. And which, I want to be clear about, I was not planning to get. I wanted to get one of those Honda Elements, one of those nifty, boxy little cars with the hose-downable interior, because we had an Akita at the time, and the Element seems like a perfect vehicle to schlep around a dog that shed its own volume in fur on a regular basis. But Krissy wasn’t thrilled with the Element, and the Honda salesdude, perhaps sensing a chance to upsell, showed her the Odyssey instead. The moment he showed her the collapsable third row which could magically disappear into the floor, her eyes got really wide, and I realized we were about to buy a minivan.

This was ironic, because just a couple years earlier, Krissy asked me to shoot her if she ever said she wanted a minivan, and I (reluctantly) said I would consider it. However, between that moment and the moment we bought the minivan, things changed: namely, we had a kid, and had gotten a very large dog, and moved to a rural area where having a car with a lot of space to haul things around in suddenly became very attractive. Krissy, whatever else she is, and she is many wonderful things, is inherently practical. A minivan made sense now, so previous protestations went off to the side.

I accepted that we were going to bring a minivan home, but I felt it incumbent upon myself to note that getting a minivan meant owning up to certain things. Which is why I got a personalized license plate for the minivan which says “NOTCOOL.” Because minivans just aren’t cool and will never be, and you have to accept it. And also that’s fine! Because Krissy was right, we needed that minivan. It was super-useful, and comfortable, and whenever social events were planned, people were glad to see us, because we could fit a whole bunch of people in the car. Minivans: Not cool. Practical as fuck.

We still have the minivan, 15 years on. More accurately, Athena has the minivan; she took it to college with her. It’s safe, still runs well (minus balky sliding doors), and Athena’s very popular with her college friends because she can haul things for them. She’s named the minivan “Yoshi” and she loves it. I expect it will get her through college and then we can give it an honorable retirement.

My current vehicle is a Mini Countryman, which we got in 2011, the first year they were available; Krissy’s car, a 1997 Suzuki Sidekick, was feeling its age and it was time to upgrade. Because we live in the boonies, we wanted something with all wheel drive, but at the time that meant either getting an SUV or a Subaru Forester, and neither option made us happy. But then Mini announced the Countryman, and we were all, like, hmmmmmm maaaaaybe.

Although it was replacing Krissy’s car, the Mini became my car. Krissy decided it made more sense for her to drive the minivan, and also, despite signing off on the Mini, she’s not especially in love with it (the seats could use a smidge more lumbar support for her tastes). I, on the other hand, really like it a lot. It’s the first car I’ve ever had that I actually appreciate for more than its simple “get me to where I am going” value. I enjoy driving it, and I like how it looks, and it feels a bit like a Tardis because it’s tiny outside and surprisingly roomy inside. I also like the look of the 2011 model more than later editions; the only thing I don’t like about it are the terrible cup holders. But otherwise, it’s nifty. I expect I’ll drive it until I can’t.

Since Athena has the minivan at school, we’re technically a single car household at the moment. We get around that because Krissy has a company car that she’s able to use (she has to pay for non-work-related gas and upkeep, which seems totally fair), but at some point we may have to get something else for her. In 2015, when I got that big deal with Tor, I gave some thought to surprising her with a convertible Ford Mustang, but when I very innocently asked her what she thought of them, she kind of shrugged and said she wasn’t in love with them. So I didn’t. That said, Krissy currently has a coupon, as it were, redeemable for the convertible of her choice any time she likes. It seems only right.

As noted above and elsewhere, I’m not in a rush to turn in my Mini, but when I do I expect it will be for a hybrid of some sort, and then an electric after that. What I really want, though, is a car that will drive itself. I’m still not that much of a car person, and I’m at the bend in the curve where my reflexes and reactions are going to get worse, not better. I’m hoping that by the time I’m sixty-five, I won’t have to do any of the driving at all. We’ll all be safer, and I’ll still be able to get places. I think it’s an achievable dream for everyone.

(Huh, I didn’t end up being all that brief on this topic after all.)