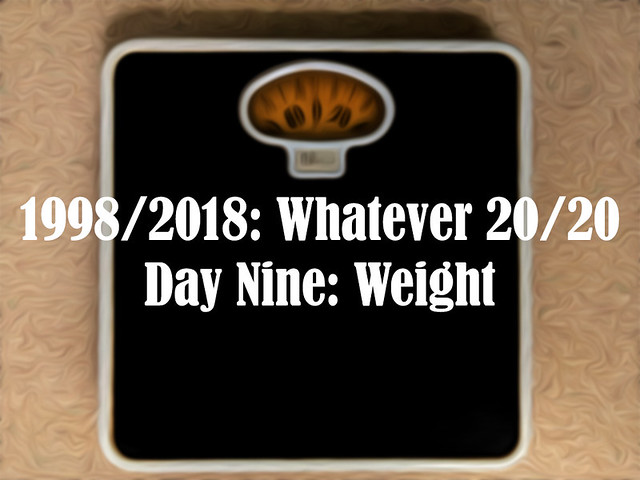 Well, this one isn’t as cheerful as some of the others have been. In 1998, I weighed a shade over 160 pounds. Today as I popped myself onto the scale, I was a smidge over 191 pounds. This is not great.

This weight gain is on me, both literally and figuratively. As much as there is a natural middle-age tendency toward weight, the fact is I could be doing more, and eating a bit less. I have been fortunate that this weight gain hasn’t had too much negative impact on my health. I went in a few months ago because of a minor health scare involving what I thought was my heart (better safe than sorry), and it turns out I’m slightly better than fine, health-wise; the pain was indigestion and the workup showed everything else was good. Half a bottle of Pepto Bismol (and half of our annual HSA contribution) later, I was fine.

But that’s not going to last. I’m 49 and change; without constant upkeep, the slide from “mostly healthy” to not will be sudden and steep. There’s more to that than weight, but for me weight is both a signal and a contributing factor. I’m not going to get any healthier, or bring my weight down, just sitting on my ass.

My current weight is not the most I’ve ever been but it’s within five pounds of it. Up until a couple of years ago I was hovering in the 175 range and then up it went, a combination of laziness, work stress and perhaps eating my exasperation at the current political situation in the United States. To be clear, it’s not Trump’s fault I weigh more than I did before he was president. Again, that’s on me. On the other hand, his presence in the White House and all the nonsense that’s come with it makes it psychologically easier for me to say, fuck it, we’re all screwed, I’m gonna have another slice of pizza. I have to work on that.

I find it easier to watch my weight when in fact I’m actually watching it — when I log calories and track steps and so on and so forth. I’m a person for whom gamifying weight and health really works, and when I get away from that I do a slow upward trend in both weight and laziness. I kind of hate this fact about me, but I’m also at an age where I worry less about the not-spectacular existing aspects of my personality and more about accepting them and making them work for me. If gamifying my health and weight it what it takes, let’s do it, baby.

This is where I announce I have a goal for myself, which is to get myself down to 180 by the end of the year, and to 170 by my 50th birthday, which is next May. I don’t think I need to get myself back down to 160; I think at this point that weight marker would really accentuate my jowls. But 170? I could probably do that in nine months if I make the effort and I think I’ll generally be happier with myself if I get there. And I know myself well enough to say that I’m more likely to make the effort if I say it out loud and in public. So: Hey! 20 pounds in nine months. Let’s see how I do.

Also, this gives me an excuse to buy a new smartwatch. Yes, I will use any excuse to get new toys. Don’t judge me. Or judge me all you want! It’s fine.