So many things to do today, so little time to do it! Let’s zoom through a few things.

Hey, look, professional football has started its season. I realize this is an opener that most of you aren’t expecting from me, as I rarely evince any sort of interest in football or the NFL, but in point of fact for the last decade I’ve had a fantasy football team (the Churro Unicorns, previously the Mediocre Walloons) in a league my friend Norm put together. He asked me into it because they needed an extra person, so I said sure, let the computer make all my picks for me, and then engage with it only to swap out player on bye weeks. My team often does poorly, but sometimes it does well; I even finished at the top of the league one year. As a result, I keep up with what’s going on in the league, especially as it involves my key players.

Which this year includes Aaron Rodgers, Green Bay QB, who did quite nicely for me last night, despite being pulled from the game for a bit. I feel the computer made a solid choice giving him to me this year. Also I was delighted by the Cleveland Browns, none of whom are on my fantasy team but who are my current avatar of sports-related futility now that the Cubs had to go and wreck a magnificent 108-year losing streak by winning a mere World Series. The Browns broke their seasons-long losing streak, but not their not-winning streak, by tying their game with the Pittsburgh Steelers. It is, as many have noted, to most Browns way possible not to lose. Let’s see if they go 0-0-16, which, honestly, would be delightful.

I won’t know until tomorrow morning whether the Churro Unicorns have won their first game of the season, because my opponent (the Ponte Vedra Wolverines) has players in the game tonight. But the current score is 64 – 37, so they have a lot of ground to cover. I’m feeling good about my chances. But then, that’s what I say every year.

Les Moonves out: And good riddance. More than a year after the whole #MeToo movement got its push, we’re still seeing fallout, which isn’t surprising and which almost certainly will continue. CBS is trying to ward off some of the fallout by donating something like $20 million to women’s rights groups. That’s nice but it’s what happens internally at CBS that really matters. And I guess we’ll see. In the meantime, another famous and important man down, because he saw women as a perk, not as people.

Directly related to this topic, the Washington Post published what I think is a very good piece from the rabbi Danya Ruttenberg on the matter of famous abusers and the subject of forgiveness, and when (and if) they should ever be forgiven their transgressions. Ruttenberg comes at it from a rabbinical point of view, which makes sense given her vocation, but the reasoning is approachable for anyone.

And it comes down to this, as I understand it: before forgiveness — and before any return to public eye — comes work: Understanding what it is that one had done wrong and working on one’s self and righting the wrongs one has done. Only then may one ask for forgiveness, and seek that return. Without having done the work, the return to the public eye is precipitate, and unearned.

I think Ruttenberg is on the right track with this, and it also explains why, as an example, Louis CK’s appearance in a comedy club failed as badly as it did. Louis CK admitted he had done bad things, and went away, but there hasn’t been any evidence that he’s been doing to the work he should be doing, or making amends as he should. So when he shows up nine months later effectively acting like nothing has happened, or at least hoping everyone else will act like nothing has happened, well. It doesn’t compute.

I think you can change some of the order of the things rabbi Ruttenberg lists for forgiveness — I think you can apologize upfront and do the work after — but doing the work to better yourself is absolutely essential. And you have to do the work of bettering yourself for itself, without the expectation that at the end of it is a return to status of any sort. And that of course is the really hard part. Especially if you have been famous or have had power.

It seems easier just not to be a harasser, honestly.

And directly related to that topic, Sarah Silverman talks about Louis CK (scroll down in the interview), and how hard it is, as someone who’s known him and has loved him as a friend for years, to be objective about what’s going on with him. It’s not that she doubts any truth of what he’s done, or defends him, but as she says, “I can’t be objective. I can’t give you a good answer on this that you’ll be happy with or that I’ll be happy with because the whole thing makes me sad.”

You know what? I think that’s a perfectly good answer for Silverman to make, given who she is and her relationship with Louis CK. It doesn’t deny what he’s done and it doesn’t excuse what he’s done, and it also notes that she is not going to be able to give a satisfying statement for most people, because what is the issue of a celebrity fuck up to everyone else is something intensely personal to her, involving her friend. It’s wrapped up in an entirely different perspective.

The internet is a place where it’s easy to demand everyone publicly answer for everything, but I think it’s perfectly acceptable for people to say, in situations like this, “Hey, I’m too close to this and I’m going to deal with this privately.” Because they are, and it’s okay to acknowledge that fact. I recognize that, especially if both parties are well-known (as Silverman and Louis CK are) and otherwise outspoken, this sort of statement can seem unsatisfying or even a little hypocritical. But, you know what, well-known people are actually also people, not just the semi-fictional constructs we make them out to be. People are allowed to deal with personal shit away from the stage. If you demand that they can’t or shouldn’t, that’s your right, but maybe look at why you’re demanding such a thing.

Louis CK done fucked up; there’s no doubt about it. Sarah Silverman should be allowed to process the fact that her friend fucked up however she wants. So should any friend, in that situation.

Obama’s speech: Hey, remember when we had a president who could speak complete sentences about things that were not directly about him? Good times, good times.

And that’s the digest for today. Please enjoy this picture of Smudge as a parting gift. See you tomorrow. 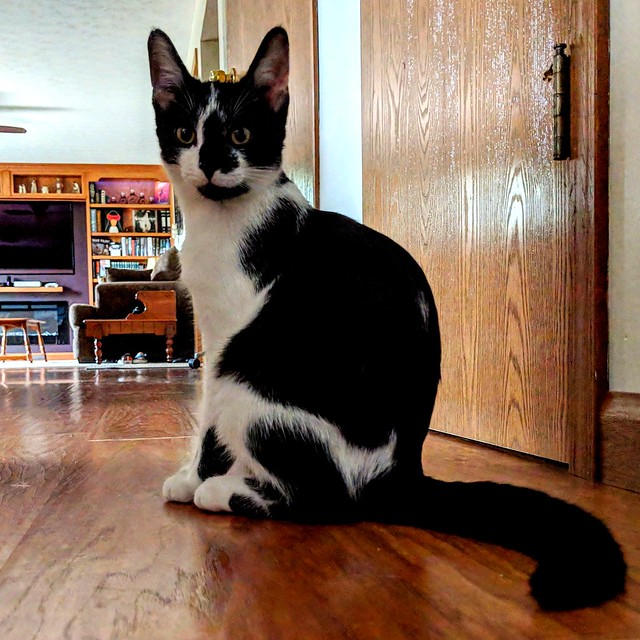