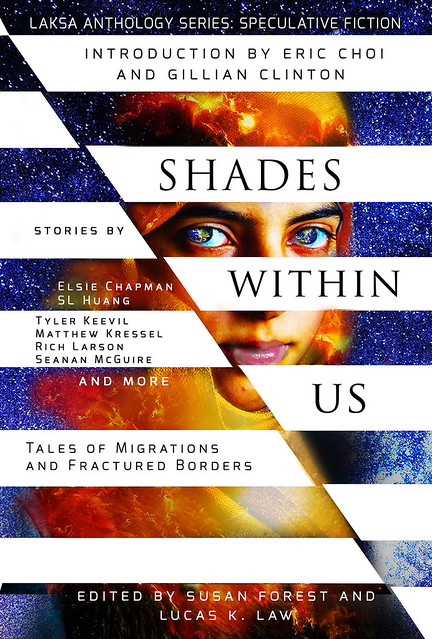 Today’s Big Idea is a two-fer: editors Susan Forest and Lucas K. Law bring your their own — and their highly divergent — paths to co-editing Shades Within Us, a collection of short stories about migration.

I’ve never had the guts to move away from my hometown; yet as a writer of science fiction and fantasy, I scribble constantly about journeys: space exploration, interplanetary colonization, fantasy kinship groups displaced by war, climate refugees. So what do I know?

But migration is a huge idea in speculative fiction. Whether borders be physical or internal; whether the voyage is forced or embraced; whether people move for political, economic, climate-related, or other reasons, speculative fiction is a fiction about crossing boundaries and becoming immigrants to a new way of living or thinking. So the exploration of this body of fiction through reading, writing—and yes, editing—requires an acquisition of knowledge. Research.

My research has probed limited experience (through travel), primary sources, secondary texts, and personal imagination. When Mars One was announced in 2012, I asked a group of science fiction writer friends, “Seriously: would you go on a one-way voyage to Mars?” OMG, YES! some of them responded. This was a tough concept for me to get my head around. Let alone the fear I would have of all the risks and loneliness and cultural disorientation, contemplating leaving my family and everything I know behind is a non-starter.

But then, I suppose it would be for many people who find themselves crossing these borders. My mother’s mother, at the age of 23, came to Canada with her husband and two small daughters just after World War I to a distant cousin’s prairie homestead, knowing full well she would never see her birth home or family again. And unlike Mars, Western Canada at least has air.

But I may well have to get my head around my own migration. In my dedication to this book, I wrote: “To Heather, who helped me to see how the concerns of migration are close to home,” because we can no longer depend on the assumption that our safe, known worlds will always be with us. Tipping points come suddenly. Though we can all see the collapse of worldwide systems coming—humans have been living far beyond the means of this planet to support our species for a long time—like death, it will come abruptly, and as a surprise. No one will be prepared. Not me.

I think seriously about this. It informs my writing. So when the chance came for me to edit Shades Within Us, the proposal offered me a perfect opportunity for research. These stories of crossing borders, both literal and metaphorical, were not only a joy for me to read and to work with to bring closer to fruition, they offer an incredible range of experiences of moving across, through and within our fractured world. Because these stories brought me into the thinking, experiences, and lives of the characters choosing—or forced—to make those transitions.

The Big Idea for Shades Within Us was conceived five years ago—along with the themes for the other anthologies we did for Laksa Media. We did not have the current migrant crisis or anti-immigration events in mind at the time. It never occurred to us because the seed for this anthology came from my own history and interest. “Migration” comes from the Latin word migrāre, which means “to move from one place to another.” Unfortunately, these days, there is a quick tendency to associate migrations with refugees and illegal immigrants. There lies the danger.

My maternal grandfather and his brother left China with his father in 1916. They left their sister and family behind to gain opportunities in Malaysia. Later, during the Chinese civil war in the late 1940s, he lost all family ties in China. My grandfather spent most of his life in rural plantations and fishing villages, as a shopkeeper, a farmer, and a small business owner, before he retired. When he could no longer care for himself, he moved again, to the city to live with his son and family.

So often, physical movement is the focus of a migration story when it first unfolds. But each move is more than a simple relocation. It is a transformation of time, place, and being. Each decision affects a multiplicity of others.

It is difficult for those who have never faced such decisions to truly comprehend the complexity and conflict that takes place in body, mind, and spirit—what my grandfather and so many others have gone through in such transitions, responding to economic challenges, employment and new opportunities, and finally, to failing health. And these are only a few of the myriad factors affecting the reasons people migrate or relocate.

With such complexity, what are the commonalities? Transition and change. Boundaries, visible or invisible, voluntary or involuntary, internal or external. And the attainment of a new life, a new world, a new reality, for good or ill, for better or worse.

Migrants are much more than just refugees and illegal immigrants.

In Shades Within Us, twenty-one authors explore the struggles and sacrifices, survival and redemption, losses and gains in their Tales of Migrations and Fractured Borders. These are not stories of despair, anger, and revenge; these are stories of facing those adversities and challenges with equal determination, resiliency, and humility.

Their stories ask us to open our eyes to see, our ears to hear, and our hearts to understand that each of us may be impacted somewhere along the journeys. Only by sharing our own stories of relocation and by listening to others about their stories, then we might reach a deeper understanding of the word “migration” and its history—its role, impact, and potential opportunity for us and the future generations.

One thought on “The Big Idea: Susan Forest and Lucas K. Law”