Good morning! I slept in a bit and I feel pretty good about it. Let’s get to it. 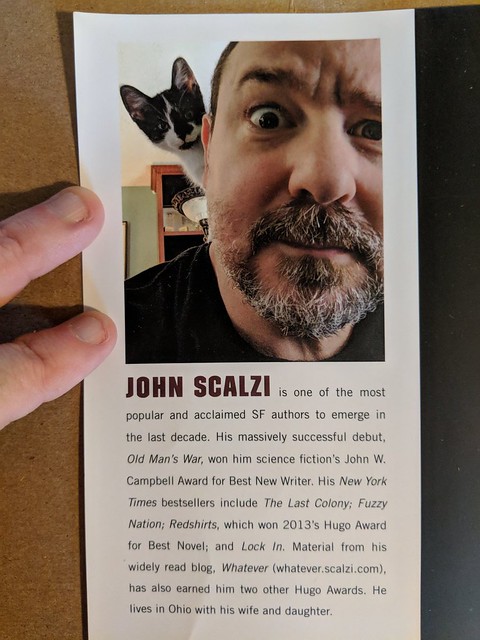 I debuted my new author photo on Twitter yesterday and it got the expected responses, including “tell the hairy guy in front to move so we can see the cat.” I remember taking the picture and sending it in to Patrick Nielsen Hayden, by editor at Tor; he replied, “That’s on-brand for you” and sent it along to production. And of course he is correct, it is on brand. And also, I’m grateful that both Tor and Subterranean Press, my other frequent print publisher, have no problem with me offering up somewhat goofy author photos. The one before this was me only half in the frame; the one before that was me jumping around with a guitar. This may make it seem like I plan these things. I don’t. But I take a lot of picture, and a lot of pictures of myself. Some goofy ones happen as a matter of course. And then they end up on my books. I think it’s close to me than a straight up would be, in any event.

In a refreshing change from the usual, I understand yesterday’s biggest political scandal, aside from all the ongoing ones, was that New York gubernatorial candidate ordered a bagel with lox, except the bagel was cinnamon raisin. People freaked out about the flavor profile. How quaint! That’s right up there with Obama wearing a tan suit in terms of “politicians doing things we really shouldn’t actually care about.” But since it was a big news story, let me just say that while lox is not what I would put on a cinnamon bagel, a) I’m not the one eating it, she is, b) I’m hardly someone to criticize people on their food choices. Also, it’s a minor food crime at best. It’s not, like, eating New York style pizza with a fork.

Follow up to yesterday: My fantasy football team did indeed win its game. The Churro Unicorns are undefeated! And, uh, 1-0. And now I’ll have pick up a QB from waivers just in case Aaron Rodgers doesn’t play next week against the Vikings. This is more thinking about my fantasy football team than I thought I would be required to do.

And honestly, this is all I have for today. I barely paid attention to the world yesterday! I regret nothing!