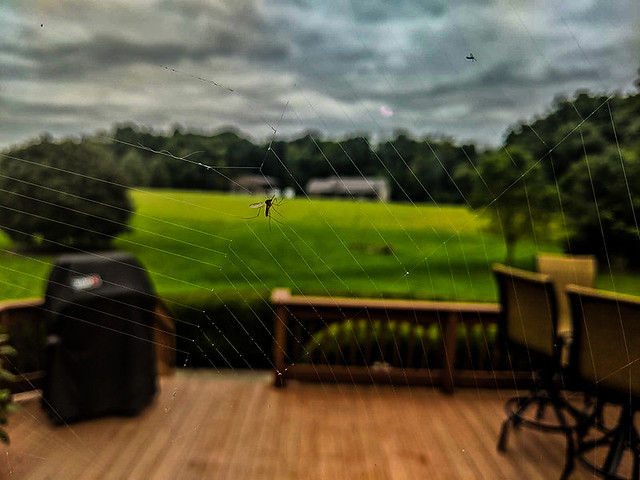 First, I want to say I admire the spider who spun a web directly across the doorway to my patio. I admire the creature’s optimism in catching the really large prey. However, I saw the web before I walked into it, so I will not be cocooned and consumed at the spider leisure today. The mosquito in the picture will have to do. However, if I get any solicitors today, I will direct them ’round back.

Second, the reason it’s noisy here today is that we’re having the house professionally power-washed. It’s been a rainier-than-average year here so far, and as a result, the north side of the house looks like this: 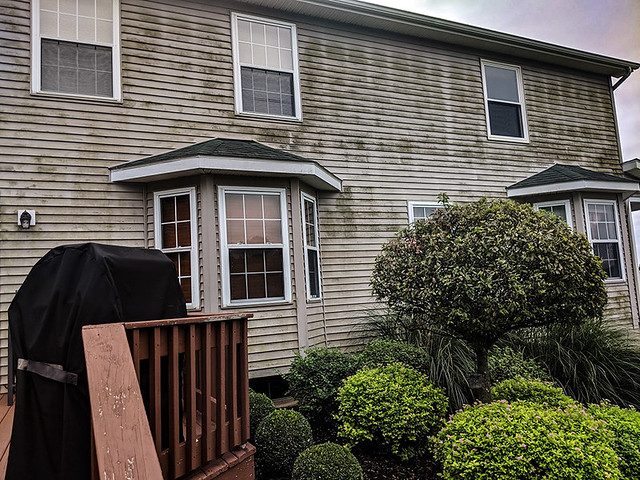 And that’s no good. Our neighbor has a small power washer, which would be fine for just around the patio, but not so great for addressing the the second floor. So we hired a pro, who even now is peeling the moss off the siding directly outside my office. It sounds like a combination of thunder and being inside a car wash. The cats are not liking it. But we’ll appreciate it when it’s done.

The one thing the power washer dude warned me is that if the moss has been there for a while, then the siding underneath may be lighter than the surrounding siding, because it hasn’t been weathering at the same rate. Which makes sense to me, but I guess probably goes need pointing out. Hey, as long as the moss is gone.

Third, Hurricane Florence. Yikes. I’ve already let some North Carolina friends know if they need to decamp they are welcome at the Scalzi Compound, which is deep inland. They appear to have made alternate plans, but it’s nice to have a Plan C if you need one. At this point I’ll just say what everyone else is saying to people in this hurricane’s path, which is: Follow evacuation directives, be safe and don’t wait until the last minute, and keep updated on where the storm is going. This is scary stuff. 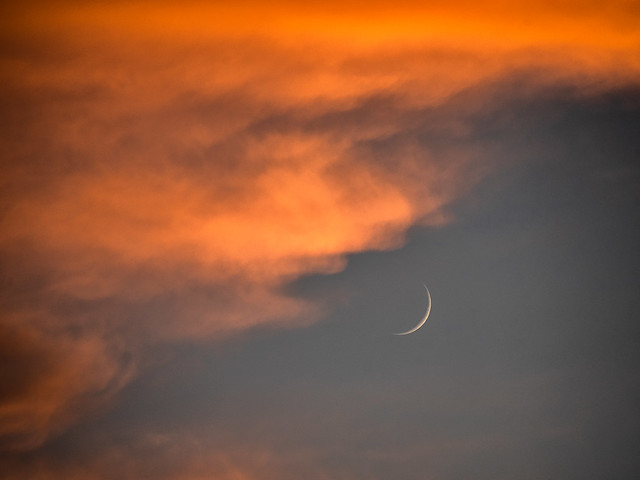 Got a very nice picture of the new crescent moon in the sunset yesterday, with my Nikon with the telephoto lens zoomed all the way in. I freehanded it rather than having the camera on a tripod, which impressed at least one person on Twitter, but in my experience you can get away with freehanding a picture of the moon if the sun is still out. It’s only after sunset (and the moon has comparatively higher contrast) that I’ve generally needed the tripod.

Taking pictures of the moon (and of the sunset) with my DSLR reminded me I need to clean off the sensor, because dust has accumulated on it and that leaves spots on the photo. I tend to take out the spots using Photoshop, but it’s a long and annoying process using the “heal” tool. I went online to find if there was an easier way to do it, but basically all the tutorials I found were for more complicated process where the guy doing it was “this is really simple…” Wrong! My way is much simpler! Just annoying.

Of course I could just clean my sensor. But that takes effort. Urgh.

Head’s up: Tomorrow is the 20th anniversary of Whatever. And I have something special planned for you all. Tune in tomorrow to find out what it is.

No, it’s not cake. Several thousand people visit here a day and another 50k of you get updates via RSS, email and WordPress. I don’t have time to make cake for everyone. Sorry.