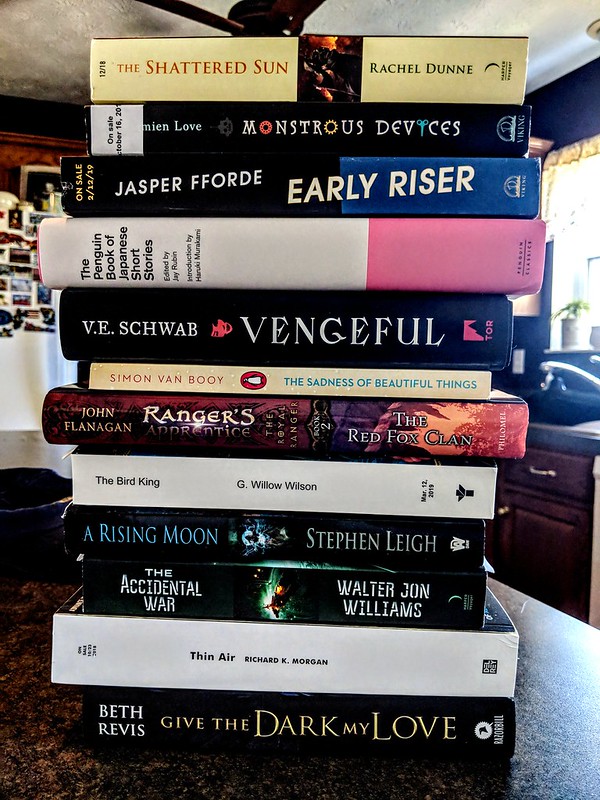 Halfway through September now, and here is a very fine stack of new books and ARCs to note the occasion. See anything you’d like? Tell us in the comments! 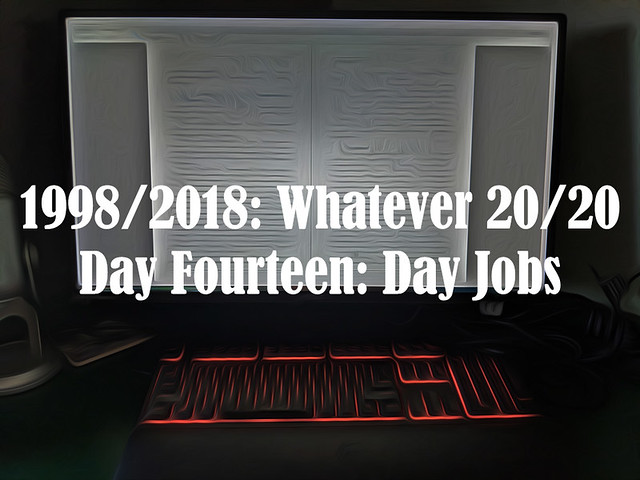 Well, for about a quarter of it. I worked at America Online as its in-house writer and editor, and got laid off that March. I got laid off not because I was a terrible employee, but because my group was being dissolved and while everyone else was going into someone else’s department, as an in-house writer and editor I was a company-wide resource, and no one wanted to put a company-wide resource on their departmental budget. So I got laid off.

Then a week later everyone noticed they weren’t getting any writing done, and I was hired back as a consultant. Half the work! Twice the pay!

The corporate world is weird.

By the time September rolled around and I was starting Whatever, my day job was being a fulltime freelancer. AOL used me for newsletters and other work and indeed would employ me off and on for the next decade; I finally signed off working for them at the end of 2007, by which time almost no one who I’d known while I was there was still at the company. Weirdly, I had outlasted nearly all of my former co-workers.

But AOL was not my only source of income. If being laid off had taught me anything (and it had in fact taught me many things) it was that multiple sources of income were the way not to starve or be in a financial panic all the time. Fortunately, in 1998, I lived in the Washington DC area, and it was a good place to be a freelancer. There were a lot of technology companies out there and all of them needed copy written or marketing done, and it helped to actually have a writer who a) understood the tech field and the lingo, b) had been a journalist in a past iteration of his work life and so understood the concept of “deadlines.” And also, because this was prior to the popping of the first Internet bubble, they had money to spend.

(Yes, but what about your fiction, Scalzi? Were you writing that on the side? Not at all! I wrote Agent to the Stars while I was still at AOL and in the short term that appears to have scratched the fiction itch for a few years; I wouldn’t start writing Old Man’s War until 2001, when I had moved out of the DC area and to my current house in rural Ohio. But for the first few years, I was all in for building up my freelance career. It made sense from an economic point of view, and also, honestly, I was having fun. In those first few years, among the more straitlaced copywriting gigs, I was also writing music and video game reviews, which was very much in my wheelhouse, both personally and professionally. I was feeling very professionally fulfilled, and also I was busy with both work and a new child, for whom I was the at-home parent. So fiction took a back seat, and would stay there for several years.)

My freelance “day job” years are ones that I still think of quite fondly. I got to do a lot of different writing and I got to exercise a lot of different writing skills, all of which, as it turns out, make me a better fiction and novel writer. Also having freelance clients who had specific expectations about the work, and set deadlines, and weren’t here for your ego as a writer, made a huge difference when I started interfacing with the business end of fiction publishing.

Best of all, it gave me money and an income that was independent of books — a good income — that meant I never had to take a book contract I was unhappy with. I could just walk away. And did, at one point; the astute amongst you will note a three-year gap between Zoe’s Tale and Fuzzy Nation. It’s there for a reason. And while I was not writing novels for a patch there, I was writing and doing other things. It was fine! I was fine. I liked having my day job. It gave me freedom until the books were in a place where economically speaking, they had to be my day job.

Which is where I am at the moment. My day job is writing novels — I write other things too, but they’re all on the side. While I do like to revel in the fact that the gig’s work attire is a bathrobe, if that, it is in fact a real job. Like my other day jobs, I am being paid to meet specific expectations about my work, on a deadline, with minimal ego. Remember when I said all the previous day job work had application to writing novels? Well, this is part of that too.

Contractually speaking, novel writing will be my “day job” for the next several years at least. And after that, who knows? I may have to get another day job again — go back to writing other things for the majority of my income. I would be okay with that if it happened. I like writing novels, but I liked all the other sort of writing I got to do (and get to do). And as all of my day jobs have shown me, no job is forever. The fact that writing here is the longest sustained writing “job” I’ve ever had says something about that essential fact.

Let’s start this off with a picture I took this morning. I call this one “Worlds on a String.” 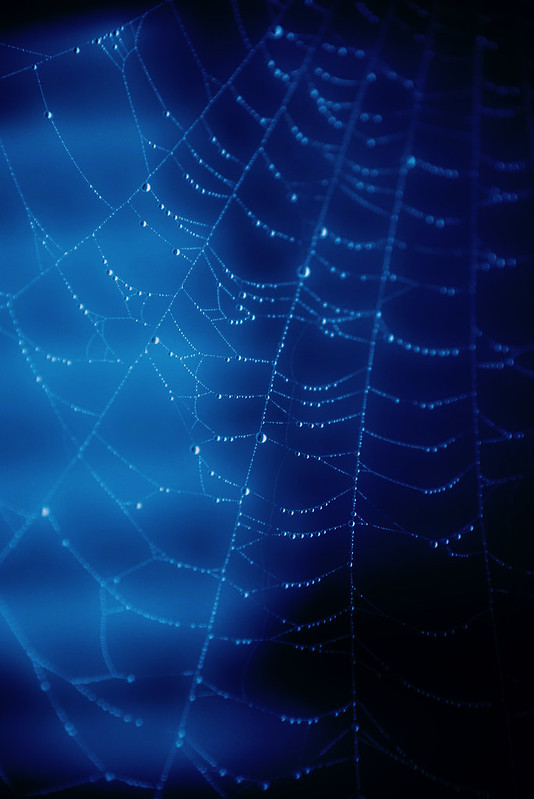 I was in Columbus last night to take part in a panel at the Religion News Association’s conference, on science fiction and religion (appropriately enough, given the conference I was at). On the panel I and three other panelists looked at how and why religion makes its way into science fiction and why writers and readers come back to it in the genre. Inasmuch as this was a panel at a conference of journalists, did they record this panel and then put it up on Facebook? Why yes! Yes they did.

So if you’re interested, here it is. My particular bit starts about fourteen minutes in, and the camera angle really accentuates that at the moment my hair looks like I have a chinstrap on the top of my head, so I have that going for me, which is nice. But the whole thing is worth watching, because everyone on it (Me, James McGrath, David Williams and Farah Rishi) had interesting things to say.

So just in case you think Twitter is a complete waste of time, my friends Chuck Wendig and Sam Sykes just had a film made based on a Twitter thread they did, just goofing around:

Chuck’s got the whole story on his site. I particularly like the fact that Chuck is played by Allyson Hannigan. And honestly this is probably the best Twitter story ever (the fact a movie was made from their Twitter thread, not the Twitter thread itself, although that’s pretty funny, too).

I’m sure things went on the world yesterday (aside from Trump’s dumbass comment about Puerto Rico), but honestly I was off traveling and talking about God and science fiction, so I didn’t keep up. In lieu of trenchant commentary on the state of planet, please accept this picture of a kitten in a sink. 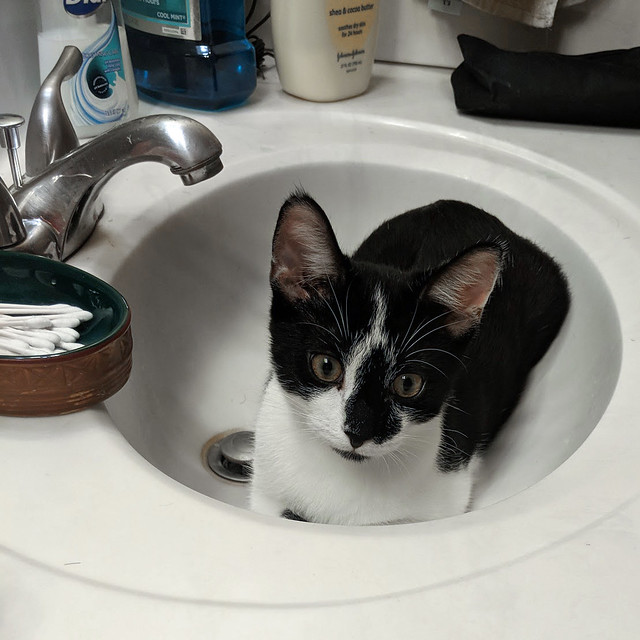 The digest will see you next Monday!