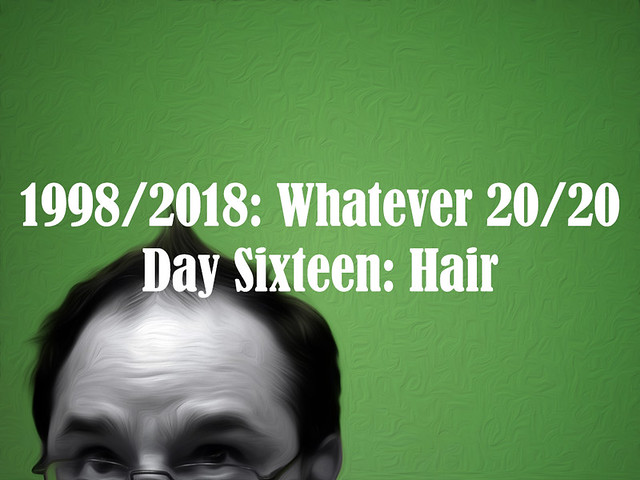 I’ve not been a fan of my hair these last twenty years. 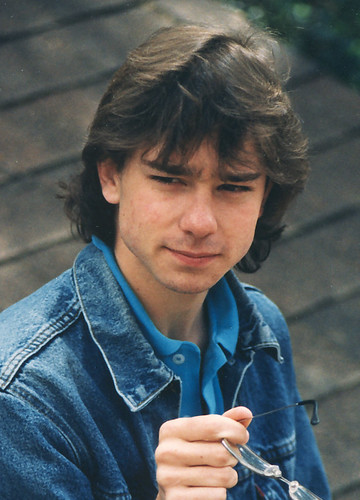 Honestly, my hair and I have never been on the best of terms. I come from a family that doesn’t have great hair; it tends to be thin and wispy in the best of circumstances, and I, who started balding at around age 24, rarely had the best of circumstances. I have exactly one picture of my hair being decently full looking, from when I’m seventeen. At the time I was rocking the perfect 80s hair; I looked more like John Stamos than John Stamos did at the time. It’s been downhill, hair-wise, ever since.

This is not to say that I desire to return to the halcyon days of feathered mullet hair. One, uhhhh, that style is dated. Two, at this point I’ve gotten used to not having to do anything with what hair I do have; the thought of having to do a whole hair regimen tires me out. If I had hair, it would still be bad hair, there would just be more of it.

What I dislike about my hair, and have for the last double decade, is not the hair per se but its balding pattern. I’ve gone bad from the center of my scalp, and the circle is ever widening. In 1998, it was a patch of bald the size of a small donut. Here in 2018, it’s pancake-sized and honestly I look like I have a tonsure, or, as I noted the other day, like I have a chinstrap at the top of my head. It’s easy for me not to notice most of the time, since I have a baffle of hair persisting at the front of my head. I don’t directly see my bald spot most of the time. But then it shows up in pictures or on video and I’m all, oh, that’s not a great look.

I should note I’m not insecure about my hair. My hair is what it is, and it doesn’t create any social or existential crisis for me. I don’t suffer any loss of social standing for my terrible hair, and I’m happily married to a woman who met me as I started losing my hair, knew what she was getting into and apparently is just fine with it. There’s no penalty for a middle-aged dude having a tonsure, basically, as long as you’re a decent human and a reasonable conversationalist. I do fine regardless of the status of my hair. I just don’t like my hair very much.

Well then, take it all off, you say. Thing is, in the mid 2000s, I did that, just to see what it would be like. As it turns out, I thought it looked fine. Krissy, on the other hand, didn’t like it at all. Considering that she was the one who would have to look at me on a daily basis, and in a general sense it’s a good thing to keep one’s spouse happy, I grew it back out. I honestly have to say I don’t understand why she prefers the Friar Tuck look to a chrome dome. But she does, and also, she keeps her hair longer than she would otherwise because she knows I prefer it that way. So. “Not entirely bald” it is.

What I learned in the last 20 years about my hair is that the secret to having it look good is basically to keep it as short as possible. Not completely shaved off but close to the scalp. Otherwise it gets tufty, quick. My rule of thumb is that when I can fashion the hair in the front of my head into a point, it’s time to get a haircut (also, I need a haircut right now).

Mind you, I don’t always get a haircut when I need a haircut, which means that occasionally I get to take pictures of myself with really terrible hair. This is, oddly enough, pretty much the only time I like my hair. I kind of dig taking terrifying pictures of myself. Call it the Opposite Instagram Effect, if you like. Or as I prefer to call these sorts of pictures: “My Next Tinder Photo.” 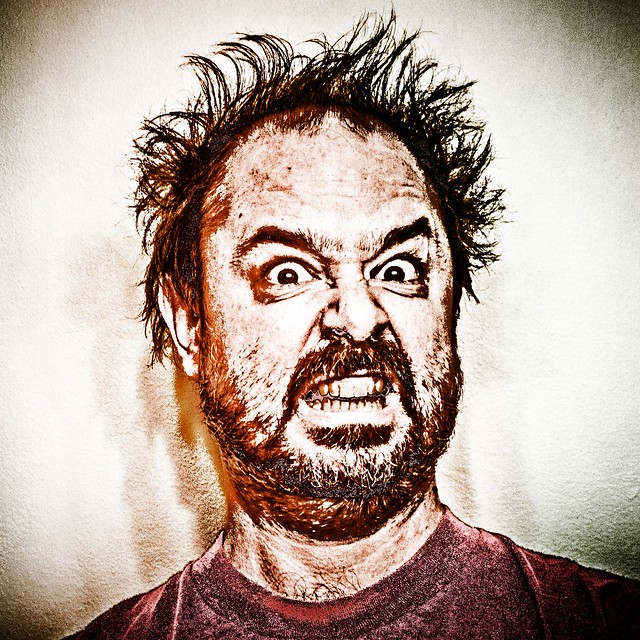 Oh, yeah. I would totally date me.

My next hair crisis, as it were, is that the bit of hair on the front of my head is thinning rather a bit recently and probably in the next year I’m going to simply just shave it all the way down, and then the question will be what to do with everything else. People say that I should do a Jean Luc Picard on it, but the thing is, a) I don’t have Patrick Stewart’s head shape and b) the hair I have in the back is both fuller and rises further up my head than Stewart’s. Also, bluntly, I don’t have a full-time stylist like Stewart did on ST:TNG — that’s right! Never compare your hair to television hair, even when the dude is bald. I guess I’ll figure it out when it happens, soon. 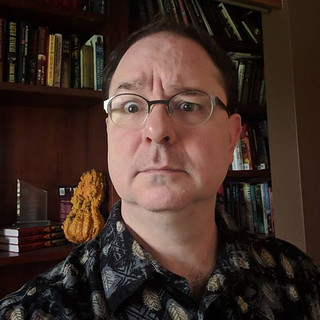 There’s another sort of hair to consider in this piece, which is facial hair. In 1998, I didn’t wear it very often; here in 2018, I wear it almost constantly. What caused the switch? Well, when I was younger, it was that I didn’t like beards much; I thought they made you look like someone’s dad, and not the cool dad but the dad that spends too much time in the basement, oiling the guns. But as I got older I realized that was a little silly, and also I became a dad anyway, and also, in point of fact, a beard looked fine on me. These days, I also wear a beard because I like so many men my age have experienced Lower Face Collapse, and the beard both gives my chin definition it otherwise doesn’t have any more, and also hides my positively tragic jowls, which at this point and short of cosmetic surgery, I don’t ever see getting any better. 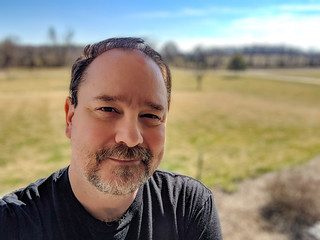 So in sum, here in 2018 I am a balding white guy with a beard. This means that I am on a day to day basis indistinguishable from at least twenty million other American men between the ages of thirty five and fifty five. Wherever I go in public there are at least a few other guys who look like I do. Even at science fiction conventions, where you think I might stand out, there’s a sizable percentage of people who have no idea who I am unless they look at my name tag. I’m not Neil Gaiman or George Martin, both of whom have a easily definable look, both to the point of being cosplayed at comic cons. If you cosplayed me, you’d be cosplaying a middle-aged white guy in an aloha shirt, i.e., 30% of dudes at a con. I have been told more than once by people at a convention that they recognized me only because I was standing next to Krissy, which, to be fair, makes perfect sense to me. No one looks like Krissy except Krissy. A lot of dudes look at least kind of like me.

This is not a complaint, and even if it was, there’s not a lot I can do about it at this point (and even more precisely, not a lot I will do about it). This is my look, and this is my hair — head and face — for a while. And I like me, even with my less than great hair. Honestly, if a tonsure is the worst problem I have with my body — and at the moment, it sort of is — I’m doing great, thanks.