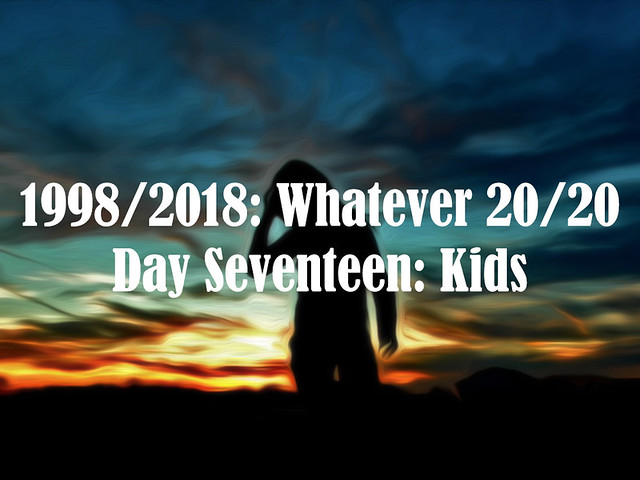 When I started Whatever in 1998, I didn’t have a kid. But I knew one was coming, since Krissy was pregnant. Her due date was December 17, but as it turns out, and in the first indication that this child was truly my child as well, the baby was kind of lazy and in no rush to head out of the womb. Krissy was induced on the 23rd of December, a week after the original due date. Athena Marie Scalzi was born, 3:31 pm, 22 inches long and nine pounds. A big baby, big enough that she broke a collarbone on the way out (she got better).

When Krissy found out she was pregnant, my reaction (other than elation because, cool, we were going to have a kid) was to start having dreams about death. Which was a new one on me; I was 29 and at that point was not giving that much thought to the fact that I would one day die. But suddenly I was having dreams where, point blank, was the announcement: “You’re gonna die one day.” Which I thought was a little on the nose. My conscious brain understood why I was having those dreams — when you have a kid, you’re no longer the last generation, there’s one after you now. You’ve willingly put yourself on the mortality conveyor belt. A perfectly reasonable explanation. But still disconcerting in dream form.

When Athena was born, these dreams stopped entirely. They stopped not because I wasn’t still confronting my own mortality. They stopped because once she was born I was okay with my mortality. Not that I was in a rush to experience it; I wanted to help raise this kid first. But it didn’t bother me anymore. I don’t know if this is everyone’s experience with having a kid — hey, I’m gonna die one day and that’s totally cool! — but it worked that way for me, and I’m glad I got that particular existential crisis done and dusted.

Of the two of us, Krissy was the one that worked outside of the home, so once her maternity leave was up, I was the stay-at-home parent and also, I took the night shift duties (roughly 11pm to 5am) so Krissy could actually be rested for her work. This was fine with me; I was still a night bird then so I didn’t mind being up late, and also, you know, even if I did, I was the one with no actual set schedule, so maybe I should just shut up and take one for the team, hey? Because that’s the thing with being a two-parent household: You’re supposed to be a team about it.

It turns out that I really liked being a stay-at-home parent. One, I got to spend a lot of time with my kid as an infant and a toddler, and it turns out she was a lot of fun during these times in her life. I had been mildly concerned, prior to her birth, that I wouldn’t relate to Athena before she was verbal, but, yeah, that turned out not to be a problem at all. Two, it was actually really congenial for the sort of work I was doing. I was doing a lot of marketing and corporate work at the time, which I could do around when Athena neeed attention. When she was napping or otherwise preoccupied, I could pop over to the computer and do the work. Most of my meetings were phone meetings so that wasn’t a problem, either.

Three, it was fascinating to see how people responded to me as a stay-at-home parent. It’s still a thing, men being the stay-at-home parent, and when Athena was an infant and toddler (and even after, since I was the stay-at-home parent her whole childhood) it was even more so. I would be tooling around with Athena in the mornings and early afternoons, i.e., when men were supposed to be at work, and people would mostly respond to me in one of two ways: Wow, there goes super-committed dad, he’s great, or look at that bum, he’s probably sponging off his baby mama. I imagine that if I explained that I was a writer, the responses would definitely fall into the second category. “Writer” is, I think, generally considered code for “unemployed.”

(In fact, I remember specifically one time when some conservative writer or another, objecting to something I wrote here, emailed me to castigate me for wasting time on my blog and letting my woman support me financially rather than getting a job and letting her have the “luxury” of staying at home. It was a delightful bit of joy to point out to him I was earning six figures as a freelancer as well as writing on my blog, that my wife worked out of the home because she liked it, that I enjoyed spending time with my kid, and also, fuck you, you sexist piece of trash. I never heard back from him after that.)

Interestingly, the one place where I definitely received credit for being a stay-at-home dad was with my writing clients. Every now and again during a conference call my daughter would make a noise, and I would explain that I was the stay-at-home parent and that half my office was given over to her play area. Invariably everyone would be impressed that I was taking time out of my schedule to be such an active co-parent. I was aware then and am aware now how vastly different that reaction would have been, had I been a woman freelancer. But since it was working out for me, I didn’t complain at the time.

As soon as Athena was born, I started writing about her here, and mostly haven’t stopped. The reaction of people to this has ranged from “your kid is cute! Write more about her zany antics!” to “Oh my god, you have acknowledged online that you have a child, now the crazies will come for her.” With the former, it’s certainly the case that I cherry-picked the adorable incidents and left out the ones where she was having a tantrum, or otherwise being a less-than-optimal person at whatever age she was at. There are many reasons for this, but primary among them was the idea that not every aspect of my kid’s life needed to be known to the general public. Before Athena was old enough to make such decisions for herself, I ran posts about her by Krissy, to make sure she was comfortable with them. After Athena was old enough to understand what I was doing, I always let her decide what about her went up on the site. It was always important for me to have her understand she had agency with regard to my portrayal of her.

With the latter, I have to say I was never all that worried about it as Athena was growing up. We live in a small town, I have a two-hundred yard driveway, and growing up Athena was with a parent when she wasn’t at school or otherwise accounted for. Beyond that, I’ve never been that hard to find. Even at the height of people being dicks to me a couple years back, no one ever bothered to come up to the house. I remember some angry dude threatening to dox me; I pointed out to him I’m in the phone book. I’m not sure he knew what a “phone book” was.

Athena was important for me in my writing life, not for Whatever fodder but as a general inspiration to do the work. Athena needed food and clothes and a place to live and eventually a college education, and I could not be too precious about the work I took in order to assure these needs would be addressed. I’ve always been lucky in the freelance work I got, but part of that “luck” was the willingness to be flexible about the work that came in. Short of work I found morally objectionable, I didn’t pass on anything. I had a person depending on me to give them a life that didn’t suck. Between me and Krissy, we managed that pretty well.

(She was the inspiration for one bit of fiction: Zoe, from the Old Man’s War series and particularly Zoe’s Tale. In those books Zoe is mostly a teen, and the books were written when Athena was between six and eight, so she wasn’t a direct influence. But I tried to imagine what Athena might be like at sixteen, and wrote someone like that. I was not far off.)

You may have noticed that for this piece I’m not directly talking a lot about who Athena is as a person. Mostly that’s because I’ve done that before, and what I wrote then still stands. But you can be assured that she is one of my favorite people in the world, and not just because she’s my kid. She’s a pretty great human. But this piece is really more about my experience of having a kid, and having her in my life for these last 20 years. It’s worked out pretty well, I have to say.

But Scalzi, you say, this topic was “kids” not “kid.” Well. We did try for more, and it didn’t work out, as sometimes these things don’t. In the fullness of time — which is kind of what this series of pieces is about —  that’s been part of our experience as parents as well. I don’t think either of us regret trying for more, just as we don’t regret the life that we ended up getting to have with Athena as our child. I don’t think we’ve lacked for anything in these last twenty years. It’s been a very good life, as a parent.

“Kids make your life complete” — Sure, they can. You can have a full life without them, and many people do, so I don’t think you can say, “Only kids will make your life complete,” which is often the subtext. I can say that I wouldn’t have wanted to miss any of the past 20 years with my kid, and my wife as a co-parent, and all three of us as a family. My life, at least, is complete because of them.