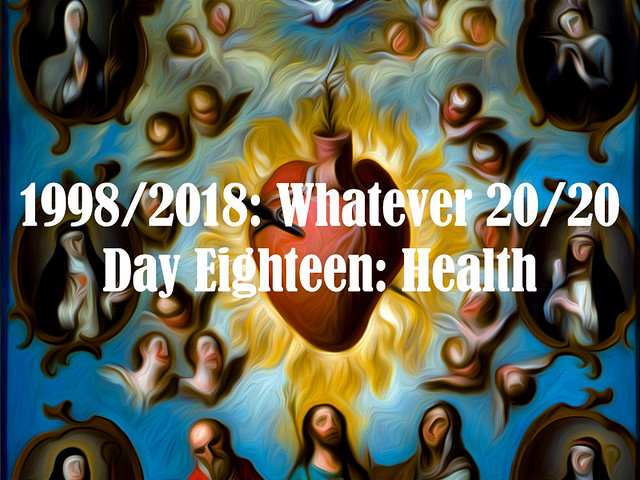 The difference between 1998 and 2018 as regards health is that in 1998 I never really gave thought about my health, and now I think about it a lot.

Why? Because I’m older and because (as noted earlier in this series) I weigh more than I used to, and because over 20 years I’ve had a series of thankfully minor reminders that my body is not invulnerable to damage, the most recent being a trip to the emergency room for a possible heart attack which turned out to be just indigestion. Which, to be clear, it’s great it was just indigestion, but 20 years ago I wouldn’t have even considered that it might be something else, much less called my physician’s office about it to have them say, “Yeaaaah, you should probably get to an emergency room right now,” because it sounded to them like a classic minor heart event. Things are different when you’re bumping up on 50 years of age. It’s better to be safe than possibly dead.

And generally there are other minor damages that have accrued through the years. I can no longer fully bend my right pinky due to a volleyball injury, which just goes to show that physical exercise is dangerous. When I was in Australia, I tore a leg muscle and had to hobble around Melbourne on crutches. I have a little bit of arthritis in my right hip ball joint. I can no longer do a forward handspring — the last time I did one, on my 35th birthday, my kneecaps tried to escape sideways and I said to myself, well, that’s enough of that.

For all that I have been lucky — I have had isolated incidents of injury, but what I don’t have, so far, knock on wood, are any chronic issues. I suppose the arthritis in the ball joint could be one, but I kind of have to go out of my way to aggravate it, mostly by contorting myself into a weird position, so I don’t really count it (yet). I have hay and cut grass allergies, which I didn’t have 20 years ago, but they’re not really doing anything to me but making me sneeze twenty times in a row, and Claritin knocks them into line. I’m healthy, mostly, on a day-to-day basis.

But as time goes on, that seems less likely to be the case, even if I do take care of myself generally. A large number of my friends have chronic health conditions now, not necessarily debilitating ones, but ones that require maintenance, and they’ve gotten them for a variety of reasons: some genetic, some environmental, some for being in the wrong place at the wrong time, and some for no reason that anyone can see other than, well, sometimes shit happens.

In my own family, as an example, we have a tendency toward cancers. My grandmother and grandfather on my father’s side were both taken out by them, although in both their cases there was a conscious decision not to fight them; my grandmother because she didn’t want to worry anyone, and therefore let it go until it metastasized, and my grandfather because, as I understand it, basically he was done with this planet and cancer seemed as good a way as any to leave it. My brother has had breast cancer — a reminder that men, too, can get it — and he’s fine now, but it’s a thing I need to be aware of, with regard to my own health. I’m going to have to be taking screenings very seriously. Another issue on my radar is mental health; there are members of my family who have various issues in this direction. I don’t, at least not to date, but it’s something I keep tabs on.

I’ve also gotten to the point in life where people my age dying, while still unexpected, is not actuarially unusual. By your mid-to-late 40s, you’re going to have close-to-age friends, coworkers and family pass away. Krissy and I have lost friends to cancer, to ALS, and to other diseases. Just prior to our 30th reunion, my high school class marked its first death, again to cancer. I don’t imagine we’ll make it to our 40th without a few more.

I’m fine with dying one day (well, not fine, but not losing too much sleep over it in an existential sense), but I’m not in a rush, either. More to the point, as much as I can control such things, I want this backslope of my years on this planet not to be burdensome, either to myself or to the people I love. This means paying attention to my health and doing all the little things required to be healthy. Which I kind of hate, because I’m lazy and all this maintenance means work. But better to do work now then not, and suffer for it later. Long-term planning. Sigh.

(But how can you say you’re paying attention to your health when you make those burritos you do, Scalzi? I hear you say. Explain that, you bum! Look, those burritos are sometimes food, okay? I don’t eat them, like, every day.)

The point is I want to be here, and still writing, 20 years from now. And if I want that, I better be paying attention to my health. 29-year-old me could get away with letting it slide. 49-year-old me? Not so much.

That said, I think I’ll go for a walk now.