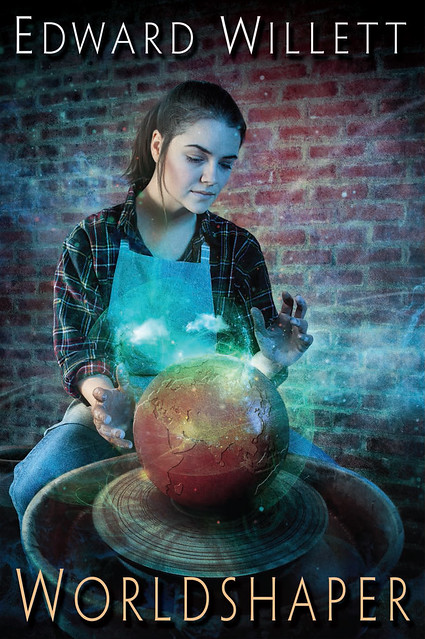 For his novel Worldshaper, author Edward Willett posits another type of authorship entirely… one with literally global implications.

Authors sometimes talk of their fictional worlds as though they lived in them. They’ll speak of characters taking on lives of their own, unexpected plot twists, settings that complexify beyond what was intended.

In reality, of course, all of this happens inside our heads…but what if, in reality, it happened in reality—or, at least, in a version of reality? What if we authors could immerse ourselves in our fictional worlds physically, rather than intellectually, and occasionally even rewrite them while we’re living within them?

The series will take place within the many worlds of the Labyrinth, an extra-dimensional realm in which people with sufficient will and imagination, called Shapers, can give the worlds of their imaginations physical form, and then take up residence within them.

Each of these worlds is populated with millions or even billions of humans, for whom those worlds are the real world, as ancient and solid and eternal as our own world seems to us—even though none of them have existed for more than a few decades.

The Shapers, having taken up physical residence in their Shaped worlds, can no more leave them of their own volition than a fictional character can exit a novel. The fortunate ones made good choice in Shaping their worlds. Others, alas, embody Psalm 7:15: “Whoever digs a hole and scoops it out falls into the pit they have made.”

A single powerful Shaper, Ygrair, discovered the possibilities of the Labyrinth and opened it to the Shapers. But Ygrair has been weakened by the attack of an enemy, the Adversary (he has his reasons) who has found his way into the Labyrinth. He seeks to execute Ygrair and destroy the Labyrinth. Along the way, he’s turning every world he can get his hands on into a copy of the “perfect” authoritarian realm he Shaped for himself.

As Worldshaper begins, Ygrair’s lieutenant, Karl Yatsar, arrives in yet another in a long string of worlds, seeking a Shaper strong enough to gather and hold the knowledge of as many Shaped worlds as possible and deliver that knowledge to Ygrair, who will be able to use it to secure the Labyrinth against the depredations of her Adversary.

Shawna Keys, an aspiring potter in a small Montana city, turns out to be the Shaper of the world Yatsar has just entered, closely pursued by the Adversary, who, during a brutal attack, successfully collects Shawna’s Shaping knowledge. The adversary is about to kill her to cement his control of her world when, to Yatsar’s astonishment, she apparently resets time by three hours.

Everything goes back to the way it was. The attack never happened—but everyone killed, including Shawna’s best friend, has not only vanished, they’ve been utterly forgotten.

Shawna’s amazing display makes Yatsar think she may the one he seeks…but when he approaches her, he’s shocked to discover that Shawna Keys has forgotten she’s a Shaper: she’s the author of the book of her world, but she doesn’t remember writing it.

With the Adversary after her, though, she has no choice but to trust Karl. They flee to the one place Karl can form a Portal into the next world, with the Adversary in pursuit and working steadily to turn every aspect of Shawna’s world against her.

As the series continues, I look forward to exploring all kinds of questions raised by the big idea of authors living in the worlds they shape.

For example: authors do horrible things to characters all the time. Remorse is fleeting because, after all, the characters aren’t real.

But in the Shaped Worlds, they are. So, if you were an author living inside a world you’d written, would you continue to rewrite the living, breathing “characters” around you for your own selfish ends?

Dystopias, alien invasions, war, plague, and supernatural horrors all make exciting stories. Would we be so willing to create worlds that contain these things if we had to live in them? No? What if we could live in them but be immune to their dangers? Would we still choose to make such worlds, at the expense of those we force to live there?

Shawna’s Shaped world is very close to ours, with a few minor changes: for example, lacrosse is the big professional sport, she once saw The Da Vinci Code: The Musical on Broadway (Hugh Jackman did his best in the Robert Langdon role, but the show sucked), there are colonies on the moon, and the president lives, not in the White House, but in the Emerald Palace.

But as the series continues, Shawna will enter worlds belonging to Shapers with imaginations far different from her own. Like an adventurous reader, she will encounter ideas, characters, and situations she may find abhorrent. Yet, to fulfil Ygrair’s task, she must attempt to save all of the Shaped worlds, even those she hates. Her commitment to the quest, her commitment to what you might call “Freedom of Shaping,” and her own confidence in her ability to Shape things for the better may all erode in the process.

Lest this sound too grim, let me hasten to add that, since Shawna is written in first-person, she has my sense of humour. The result (according to one pleased reviewer) is a “sarcastic wiseass smart-mouthed main female character.”

I can’t live in my fictional world physically like the Shapers can, but in Shawna (and the other characters) you’ll still find bits of me, as you will in the ideas infusing the series, both small…and big.

Read an excerpt. Visit Willett’s site and follow him on Twitter. Check out his podcast, The Worldshapers, featuring conversations with science fiction and fantasy authors about the creative process.