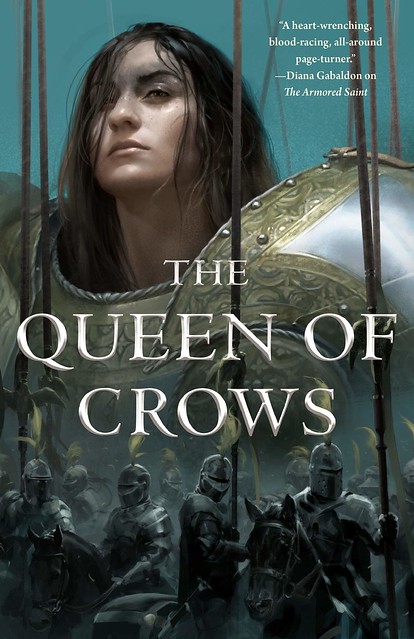 What is a hero? For Myke Cole, the answer to this question is not exactly the one that usually applies. It’s a thing that helped to fuel the writing for his latest, The Queen of Crows.

Five years ago, I wrote about a singular experience. I know we live in the age of TLDR, so I’ll sum it up for those of you who won’t bother to click on the link – After my 2nd tour, the love of my life took a long look at the man she’d fallen in love with, compared him to the guy who came back from Iraq, and split. That’ll make you do some out-of-character stuff, and in my case, it resulted in my going to the on-post chapel at Naval Air Station, Pensacola in the hopes that something, anything, might break me free of the singular compulsion to suck-start a Glock.

It was the low-point of my life, and I was desperate for any human connection, so I was thrilled when one of the parishioners approached me, noting my tactical pack (which still had my blood type scrawled across it in black sharpie) and asked if I’d been down range. When I told him that I had, he turned to his son, and said “See? That’s a hero.” Then, he walked away.

Guess I was wrong about losing my fiancé being the low-point. This was lower. This utter isolation. Look, I know the guy meant well, that he was trying to honor what he viewed as a burden I had taken on so he wouldn’t have to. But by affixing a label, even a complimentary one, he’d severed all human connection. There was no need to get to know me, no need to understand my humanity. I was a “hero.”

Dark story, I know. But things got better for me. I moved on. I got my feet under me, put my life back together again, but I never forgot that singular moment, that intense powerlessness, when someone else had defined me. I looked at the world differently after that, suddenly awake to the way we use labels and the weight of institutions to define others, to rob them of their chance to do it for themselves. Worse, we cling to these definitions when the people we foist them upon resist, we fight them tooth and nail. This person is a “patriot,” this one a “coward.” This is what “good people” do. A “Christian” behaves in one way, but not another.

Labels, and the institutional membership they convey, don’t square with the complexity of human existence. They bound life in sharp lines that cut a bloody swath through the reality of the way people are actually in the world. And yet we need them, we will fight to uphold them. In 2018, we are witnessing a singular contest, a cold civil war with the sole objective of defining what sort of person may call themselves an “American.”

In a perfect world, we define who we are moment to moment, at complete liberty to live our true selves in all their complicated glory.

But we don’t live in a perfect world.

And that’s the big idea behind The Queen of Crows.

Heloise Factor, the hero of The Armored Saint, ends things on . . . let’s just say (without spoiling anything for those of you who haven’t read the book) a high note – an act of singular heroism. Unfortunately for her, it is an act steeped in meaning to the members of her religion, and anyone who achieves it is – according to the scriptures of their faith – rendered divine.

The mantle of a saint is heavy. It comes with reverence and honor. Saints are worshipped, are even obeyed. But saints are also chained down by the weight of expectations. There are things saints must do, things saints must not do. A saint is a living symbol, their every word and action a kind of theater, a passion play that affirms the faith of a watching body of the faithful.

And Heloise is most certainly a saint. But she is also a young woman of sixteen winters, who loves, who desires, who is frightened, who is unsure. The moment of her heroism was quick and dramatic, but the consequences are far beyond anything she could ever have imagined. Thrust into the role of symbol and leader of a rebellion against authority, her humanity comes into conflict with the title she never asked to hold.

In The Queen of Crows, Heloise is pitted against the most powerful army in her nation, with only a fractious mob of peasants behind her. And even they will not follow her if she casts aside the title of sacred icon, refusing to act the part of the divinely-inspired holy warrior her people have decided she must be.

How will Heloise hold up? Who will she choose to be? And most importantly, can she win the contest to come?

Only one way to find out. Come along, and I’ll show you.