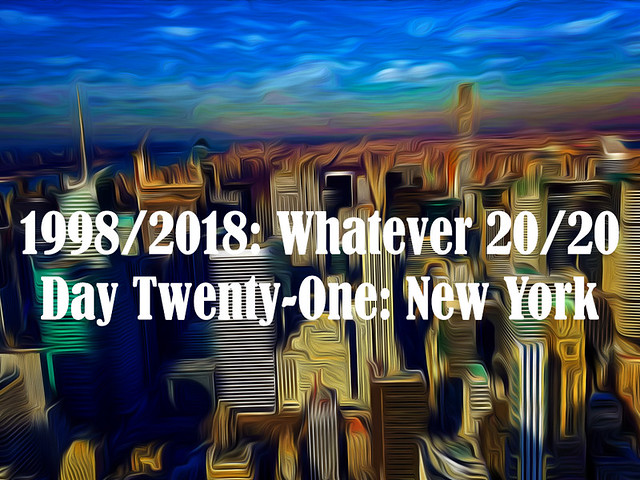 I’m actually writing this in New York; I’m currently loitering at a hotel near Penn Station, in room that looks like the nicest dorm suite at NYU and can hear the street noise rising up to my windows. It’s surprisingly nice white noise, although history reminds me that sometimes it’s just noise, and loud. It’s New York. Whaddya gonna do.

I picked New York as a subject for this series not just because I happen to be in it today but also because in many ways it’s an emblematic town for me, one that especially in the last twenty years is tied intimately to my professional life. When I was a freelancer a lot of my gigs came from a marketing company rather pointedly located on Madison Avenue; now as a novelist Tor books is currently located at the iconic Flatiron building, although not for much longer, alas. I come here regularly on tour and to do events like Book Expo America and New York Comic Con. I have a ton of friends here, as well as compatriots in publishing. More than any other major city in the US — even LA, in whose suburbs I grew up, or Chicago, where I went to college — this town has a direct influence on my day to day life.

Also, weirdly, it’s still a town that doesn’t feel completely real to me. Unlike LA or Chicago, I’ve never lived in New York; I’ve spent at most three or four days in it at a time. That’s enough time in aggregate to start to get a feel for a place but not enough time for it to become a place that feels grounded. I’ve never had a daily life here — I’ve never had to pay bills or do grocery shopping or deal with plumbing here. For those reasons (and others like it) New York still feels like a special, different, place to me. Magical? I don’t know about magical. Too much vague urine smell for magical. But as they say, there’s no place like it.

It’s also the city people think of when they think of writers; for good reason, since most of big-league publishing is here and I suspect roughly half of Brooklyn lists “writer” as their profession on their tax forms, and another quarter are probably editors, agents and other citizens of the publishing world. When I visit I feel like I’m visiting the home office, as it were. A place where if you say you’re a writer you get a look that says “well, obviously you are, we all are” instead of “how do you manage to eat?” or just a polite blank stare that suggests the person never considered it a profession at all.

I’m not sure that means I would ever want to actually move here, however. I kind of like having NYC be a special “sometimes” place for me, a place to visit and be familiar with, but never bored of or irritated at. A place where it’s still exciting to come out of Penn Station, look down 34th street and see the Empire State Building and go, oh, hey, it’s actually a thing that exists in the world. I’ll let my friends who live in NYC be blase about it. I’m happy to go the other direction. And I’m happy to still be happy to be in town.

(That said: New York style pizza? Eh. It’s okay, I guess. There, the requisite fighting words have been said. We can move on to other things now.)