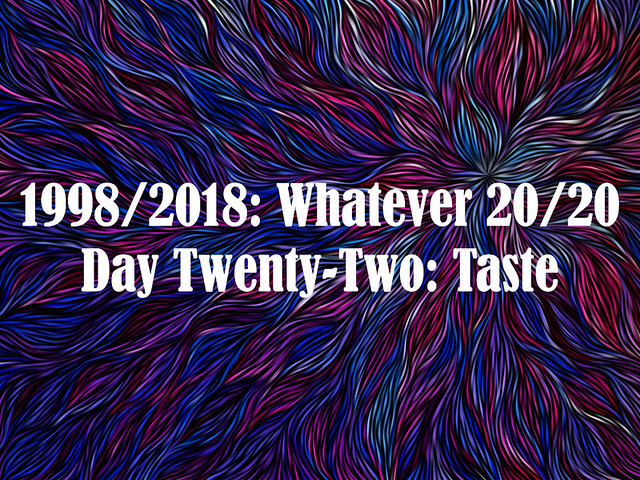 But then again, it’s also true that if you show me a person when they’re a teenager, I’m going to probably be able to tell you what they will like in their 40s. It’s a truism that they styles and tastes we develop early matter for what we like later on in life. It’s one reason why currently, for example, 80s bands who haven’t been “hot” for decades are selling out theaters and raking in money with “VIP” packages — because everyone who loved them when they were 15 and broke now has money and wants to meet their favorite band, even if for a momentary “grip and grin.” Am I any different?

I don’t particularly think so. The bands that were important to me growing up are bands I still like to listen to, to follow up that example — I use Sirius XM’s “First Wave” and “The Bridge” stations (80s alternative and 70s mellow rock) as my aural wallpaper, and more generally the musical forms I liked then are the ones I like now. And more than that; in a larger sense, the forms of entertainment and culture I liked when I was fifteen, I liked when I was thirty,  and I like now. Not only, to be sure, but, yes, still.

But the larger question might be: What sort of things do I like, culturally? I addressed this over the summer, actually, when Athena and I did a couple of podcasts about movies we saw. And what I said then (and she agreed with) is that I’m easy to entertain but hard to impress. Which means that I get to enjoy lots of common culture. I like pop songs, and superhero films, and mindless first person shooter games, and animated shows with farts and puns, and so on. Nor do I feel guilty about liking those things. Not everything one consumes culturally has to be life changing or immortal. Sometimes it’s nice to get out of one’s head, and sing along to a chorus or watch a hot young actor in spandex blow something up in glorious CGI. It’s allowed.

With that said, I’m also not going to argue these things are amazing, either. I love a good pop song; I’m not going to (necessarily) argue that this pop song deserves the same cultural status of Bob Dylan or Joni Mitchell. Superhero films are fun but they’re not necessarily Citizen Kane or Do the Right Thing. They can be! I can think of pop songs I do think deserve to be considered as near-Platonic ideals of the form; I think when Black Panther is inevitably nominated for Best Picture (and not that ridiculous “Best Popular Picture” thing, now withdrawn), you can make a strong and serious argument for its inclusion, for all the things it does right cinematically, for its distillation and critique of superhero film tropes, and for its impact on the common culture this year. Bring it.

But the point is that not everything has to be great, or brilliant, or lasting, in order to be good and entertaining and important to you, in the moment, or as something that brings you joy. If you really like something, you shouldn’t have to then embark on a 14-point apologia, complete with PowerPoint presentation, about why, no, really, it is important. Maybe it’s not! And that’s okay. Enjoy it for what it is.

All of which is to say, coming back around to me, that I acknowledge and am okay with the fact that with a lot of things I have pretty common tastes. I have my pockets of cultural eccentricities and idiosyncrasies — if you like I can do a deep dive into my love of Glenn Branca compositions, or Sally Potter films, or [insert cred-inducing name drop here] — and I’m okay liking them, too. But at the end of the day, while I can acknowledge that, say, Orlando, is a better film on many different levels than Ant-Man and the Wasp, I’m not going apologize for liking the latter or use the former as a shield for credibility.

Indeed, accepting that you can like what you like, whatever you like, opens you up to being able to like more things. When I was younger I didn’t like country music because it wasn’t cool to like country, and I had to get over that sort of cultural anxiety to discover how much I love the music of Emmylou Harris, and Julie and Buddy Miller, and Steve Earle (among others). I can’t say I know enough about rap and hip-hop to be considered anything more than a casual listener, but I know I love stuff from Jean Grae and Quelle Chris, and Open Mike Eagle, and Dessa. It means I don’t worry about being a 49-year-old dude who really digs Charlie XCX songs. I’m not liking any of that to seem cool or relevant or interesting. I like ’em because they work for me on some level.

So, no, I don’t think my taste has changed much in the last twenty years. The individual things I like have — or at least, I try to continue to bring new things into the collection of things I like — but the ethos underlying those choices has been consistent. It’s worked for me.

(And as for style: Well, I used to wear a lot of t-shirts and now I wear aloha shirts, which are functionally the same thing, just for middle-aged dudes. So, yeah.)