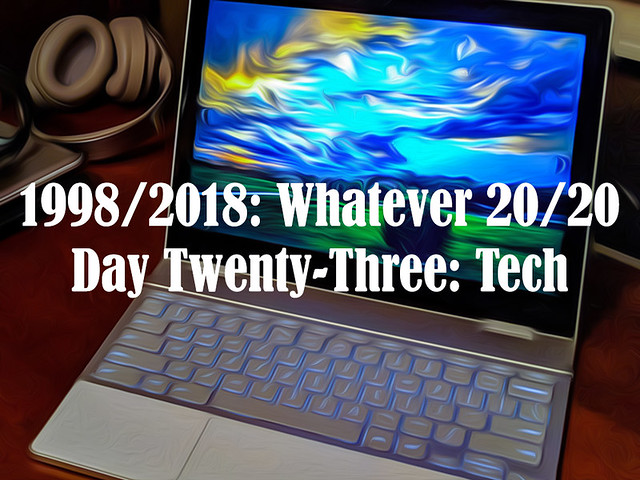 Much of my creative life, and certainly almost all of my professional life for the past 20 years, has been greatly influenced and impacted by technology.

It starts earlier than that, of course. In 1984, the first Macintosh computer came out, and it came with a simple word processing program. Coincidentally, 1984 was the first year I started writing short stories or fiction of any sort, camped out in Erza Chowaiki’s room in our high school dorms, since he had the Macintosh and I did not.

As I started my creative life on the computer, my creative process was also shaped by the computer. For example, I don’t write drafts of my books, a thing which one would need to do when one was working on a typewriter, and editing on the fly, as one can on a computer, was not possible. When I type the words “the end” on a manuscript, it’s ready to send off to the editor — not because I write perfect prose (trust me), but because all the edits and changes I wanted to make were done as I was writing the book, in a rolling draft. One’s tools shape one’s process.

By 1998, effectively all my writing of any sort was done on computer, much in the same way it gets done now — the “word processor on a computer” metaphor is a durable and useful one. And as an artifact of my own age and and habits, I tend to write better on a desktop computer than on a laptop; something about being at a desk, with the work tool firmly rooted in place, gets me in a mind for work. It’s not impossible for me to work on a laptop; I’m writing on one now, and most of my recent novels have had substantial chunks written up on a laptop, when I was traveling or just wanted to sit somewhere else in my house for a change of pace. But most of it is at the desk, on the desktop.

Also in 1998, digital rather than print was my primary mode of transmitting my words. While the tools have changed, this is still (largely) true today. In 1998, when I started Whatever, I taught myself enough html to make the blog and update it daily. Today WordPress does all the backend for me, better and more robustly than I ever could (thank you, WordPress. In fact I found rolling my own html exasperating), but still more or less how I started doing it back in the day. I famously posted my first two novels here online, in a very early example of digital self-publishing, which ended up getting me a traditional publishing deal — but “traditional publishing” these days also includes electronic books and audiobooks, the first format of which could hardly be said to exist in 1998, and the second of which was wholly overhauled and expanded by digital transmission. Ebook and audio without a doubt have made a huge difference in my success as a writer.

Aside from work directly, tech makes an impact on how I live my life. Directly, these days it’s been amazing to me how so much of our digital and technological life is now primarily carried in a single object: Our “smartphone.” Like most people, I think, at various times in my life I have had a phone, a camera, an ebook reader, a device for listening to music, a separate device for video (with music included), a device for recording audio, and another entire device for accessing the Internet (known as “a computer”). Oh, and paper maps. Now: you have a phone.

I do love this, I have to say. Even 1998 me, with all his tech toys, would have been utterly amazed at my current phone, the Pixel 2, and everything it can do that no one in 2018 thinks is in any way particularly noteworthy. Obviously a smartphone has a camera and apps to access music and video and books and the internet and also tracks your health status and where you are on the planet and how you can get to where you are going next and has the ability to text people across several different media and even sometimes, if you’re old and still into that sort of thing, you can use the phone to talk to people.

(And honestly the amount that the smartphone has actually killed talking on the phone is the most amazing thing to me, and even more amazing is how it’s killed it for me. My smartphone rings and for the first few seconds I just stare at it, thinking, what the hell is it doing now? Then I remember: It’s being a phone.)

I do still have some dedicated “single use” tech: I still have a dSLR camera rather than just relying on my phone for pictures, as an example. And of course I still have a desktop computer and a laptop computer. Phones these days are useful for reading and consuming things, and many things these days can be created on them, but for me they’re kind of cramped for typing and writing anything longer than a tweet. But even I don’t pretend that the Internet is not now primarily living on people’s phones. It is, and it’s a thing creative people with digital lives have to work with. It’s not bad. It just is.

I wouldn’t go back, regardless. I like my smart phone, just like I like the computer. I think about generations of writers writing drafts on typewriters (or by hand(!(!!))) and then having to redraft and literally cut and paste changes onto paper and I get tired and moody. I can’t imagine having a been a writer without a computer. I’m pretty sure I would have been, anyway, but not in the way I am now, and very probably not with the success that I have had. The next generation of writers will include someone who composes novels entirely on their phone and thinks it mad that anyone else has ever done it differently. Good for them. I’m glad it works for what they do. I hope the work is good. I’ll still need things to read.