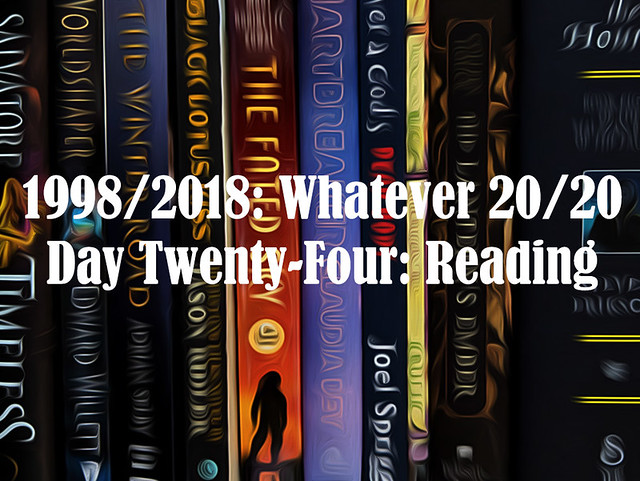 Over the last 20 years, and on a day-to-day basis, I don’t think what I read has changed much. I read a lot of non-fiction, a fair amount of science fiction and fantasy as well as the mystery genre, and I read a whole lot online, specifically news and tech sites, plus the occasional magazines that cover the same ground. In 1998 as in 2018, this is fairly constant.

What has changed, and makes for an interesting reading dynamic, is the fact that now I know so many of the people I read. Particularly in science fiction and fantasy, which is the genre I write novels in.

Didn’t you know any authors in 1998, Scalzi? Well, no, not really. I knew journalists, who are of course writers as well as editors, because I worked with them, first at the Fresno Bee and then at the various papers and magazines I freelanced for. Occasionally some of them would write books as well. But I didn’t know many authors, or more accurately, people whose writing output was primarily books. I knew only one novelist, my friend Pam Wallace, who was also a screenwriter (she co-wrote Witness, for which she won an Oscar). Certainly I did not know the authors of the fiction I was reading at the time.

This isn’t a bad state of affairs, to be sure. Most people in fact don’t know the authors or novelists they love to read. Authors exist when their books come out, and otherwise disappear into the background. Even “celebrity” authors are generally not known outside of their specific fan base, and often not all that well even then. I love Carl Hiaasen books; I wouldn’t know if he was standing directly next to me unless he introduced himself (and I hope he would). At any one time there maybe ten authors in the world immediately identifiable on sight by the general public. All the rest of us slip under the radar. So in this respect in 1998 I was no different than any other person.

But when you write novels, and particularly in science fiction and fantasy, which has such a well-developed community infrastructure, you start to meet other writers and you start to keep in touch with them. I went to my first science fiction convention not really knowing any writers; I left knowing a couple dozen. Over the next decade, I got to know them and they got to know me, and I met all sorts: Writers who were coming up, writers who I had long admired, writers who were hot in the moment, writers who in a year or two would be the biggest thing happening. They were (mostly) normal people! They were (mostly) lovely to know and hang out with! And then I became president of the Science Fiction and Fantasy Writers of America, and for three years it was sort of my business to know what roughly 1,800 SF/F were doing with themselves.

And as a result, when I would pick up a book, I wasn’t just reading a bit of entertainment, I was reading something out of the brain of someone I know, and probably liked, and possibly was actual friends with. Which is an interesting thing. With the people I knew whose work I already liked, there was the warm glow of this is my pal, and they write real well. With the people I knew whose work I hadn’t read yet, there was, ohhhh, please let this be good (it usually was). But in every case there was the connection between the work and the person I knew, which is a nice feeling.

It also means that, as a novelist myself now, I have some empathy and sympathy for everything about having a book out in the world — the process of getting it there, the process of having it out there, and the process of having to move on to the next thing. For someone who is only a reader, a book can be a just a book, as it should be. I think for most writers, when they see a book, they at least intuit everything that is around the book and everything it took for it to come into being.

I don’t think this makes me a less critical reader — I’m pretty sure I like the same ratio of books as I did 20 years ago, and there are plenty of books from writers I like and admire as people for whom I am not the ideal audience, and that’s fine. It does put what I’m reading in a different context. And while I may or may not like a novel or book, these days I’m less apt to dismiss the writer of it to whatever degree I might have before. I know from experience what it takes to put out a book. Anyone who goes through all those hoops deserves to be acknowledged as a member of the tribe, as it were.

This is a perspective on one’s reading that not everyone has, can have or even should have. It’s fine for readers to just be readers. But I do think being an author and knowing other authors and novelists has made me a better reader, or at least a more empathetic one. And I will say that that there is one thing about reading now that I absolutely love: When I go to a bookstore and see all the work on the shelves, it’s kind of like visiting friends. What a wonderful feeling that is.