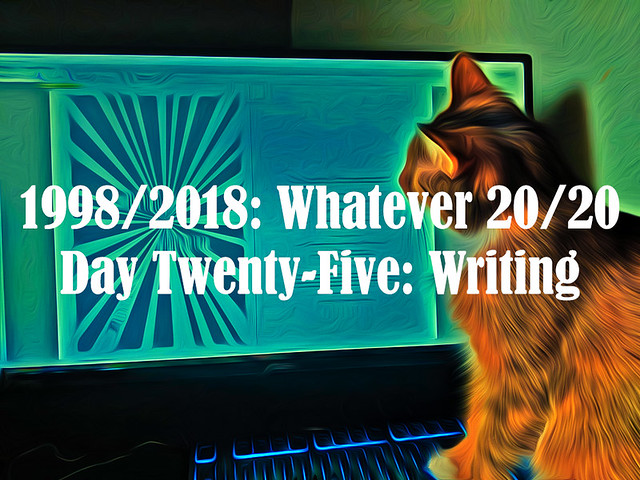 Writing has gotten simultaneously easier and harder over the last twenty years.

Easier, because, bluntly, I’m better at it now than I was 20 years ago. Better at which parts? All of the parts. There are literally no technical aspects of writing (including the technical aspects of creativity) that I don’t just simply do better. Much of that would obviously be down to experience. Twenty years on from 1998, in which I was still in my twenties and hadn’t written much in the way of fiction, I have a wider range of writing experiences, and I’ve written more in each sort of field. I have gotten feedback from editors and readers and from my own observation, have incorporated all those, to greater or lesser extents, into my writing practice.

This means that here in 2018 I am generally in control of my instrument. Let me give you an example. When I set down to write my first couple of novels, I had very little idea of what I was doing, and basically had to discover the story in the writing. Not only could I not have told you at the outset what twists and turns were coming into the story, but I didn’t know what I wanted out of the characters or the action until I was in the middle of the writing. I was a good writer back then, but I wasn’t entirely in control of my instrument: my creativity, my technique or my intent. My first few novels are good novels, but the process of writing them was creatively very messy indeed.

Contrast that with, say, The Collapsing Empire (or its follow-up, which is out in three weeks(!)). For that one, I knew what I wanted it to do, I knew who I wanted the characters to be, and I knew how to make the writing do exactly what I wanted it to, when I wanted to do it. That book is exactly the book I intended it to be when I set out to write it — which is different than, say, Old Man’s War, in which I didn’t know how it was going to turn out until I wrote it.

Does this “control of the instrument” matter to the reader? No, it shouldn’t — because in both the case of Old Man’s War and The Collapsing Empire, or indeed any other book I write, the process is not visible to the reader, only the output. There’s a whole side to the publishing industry designed to take what the writer does and make it all look as smooth and intentional as possible; it’s called “editing.”

But it makes a difference to me, the writer. When I started writing novels, it was like throwing myself off a high cliff and inventing a glider before I hit the ground. Now I launch with the glider, and get to tell it where to go. And not just with books — again, every type of writing I do, I do better now than then. Experience counts.

But it’s also become harder, because I don’t have the same life as I did in 1998. In 1998, my life was relatively simple. I had to hustle for freelance gigs, which is a thing, but the goals of each freelance gig were relatively small and executable. It’s not that difficult, for example, to write subheads for a brochure about investment vehicles, or a short review of a music CD. It could be done fast and the stakes were low (and if I didn’t do it right, it was also easy to implement an immediate fix). I mostly stayed at home and I mostly had a low profile in the world.

Here in 2018 I write novels, which are long (by definition) take time to write. I have a significant contract and I am well-known in my field, so what I write has at the very least commercial significance, and people are counting on me in a non-trivial way to do what I do in a way that’s competent and commercial and robustly marketable. I also have to be reliable, so that when (for example) I have to turn in a novel under a tight deadline, I can be relied to do that, and to address the follow-up editing quickly.

I travel extensively to promote the work I do, which eats into my writing time. I have multiple projects in the air at any one time, many of which require work that is not directly related to writing, or at least writing that’s public-facing. The audience for my notes about treatments for TV/films projects is limited indeed.

Also, life! It’s busy and complicated as it is, I dare say, for most people, especially these days, when the world is on fire in a way that it hasn’t been before, which is distracting and enervating. But even moving away from the monumental distraction that is our current political shitpile: Kids and spouses and family and extended family and friends and all of that, too. To be clear, most of that is pretty good! But even when it’s pretty good it still takes time. It’s supposed to take time.

To put it more directly, in the last twenty years, and especially in the last few years, my writing process has to make way for the world far more than it used to, for all the things that the phrase “the world” can encompass. And you know what? That makes it harder.

And, yes, I know: World’s tiniest violin, oh, poor Scalzi. I get that. But, look: I’m not actually telling you to pity or sympathize with me. I’m merely fulfilling the brief of this series. I’m telling you, on this subject, how things are different for me now than they were two decades ago. I want to be clear I don’t regret most of the circumstances of my world right now (I regret Trump is the president, a lot, but I didn’t vote for him, so at least on that front my conscience is clear), but I think that even good things have some consequences, and they have an impact on your life. And in my case on my writing life.

So writing today is both easier and harder than it was twenty years ago, and the end result of both of those is… mostly imperceptible from the point of view of the reader, I would guess. The books come out more or less regularly, the other work also appears in a predictable fashion, and at the end of the day, experience seems to replace what the world takes away — or at least, offers a way to compensate for it, which is not quite the same thing, but works very similarly.

I think from your point of view, nothing much has changed, in terms of my writing. I’m happy to keep it that way.