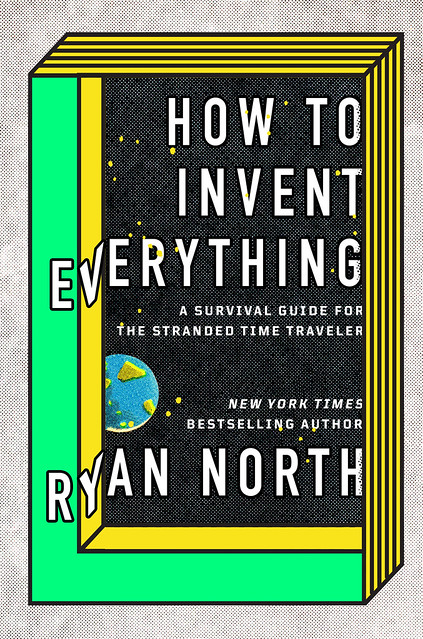 I wanted to write the most dangerous book in the world.  Assuming time travel exists, I think I’ve succeeded.

The big idea in How To Invent Everything is this: is it possible to collapse our modern civilization into a single text which anyone, regardless of experience or education – or the time period in which they’re stranded – could use to rebuild our world from scratch?  I wasn’t at all certain that it was, but if it were, it sounded exactly like the sort of book I wanted to read.  And the more I thought it, the more it excited me, because this would be a book which – once you’ve gone back in time with it – would absolutely make you the most influential, powerful, and decisive person in history.

I’m probably not the person you’d choose to write a book like this.  Up to now, all of my writing has been fiction: comic books about a girl with squirrel powers, short story anthologies about a machine that knows how you’re going to die, and choose-your-own-path versions of Shakespeare.  This was obviously something different, and I had no idea where to start.  So I began with what I knew: fiction.

I made up a future in which time travel existed and was practiced routinely.  It was a world in which time machines are rented like cars: generally painlessly, though sometimes with the risk that your too-good-to-be-true deal of a vehicle breaks down.  It was a way to ease myself (and readers) into the concept, and it helped me set up some ground rules: you, as a reader, are a temporal tourist.  You are trapped in the past in a broken rental-market time machine.  There is a repair guide, but it very quickly reveals a unfortunate truth: that time machines are for sure the most complicated pieces of machinery humans have ever produced, and that there aren’t any user-serviceable parts inside.  Time machines are so complicated, in fact, that it’s actually easier to tell you how to rebuild all of civilization than it is to explain how a 45.3EHz chrotonic flux inverter works.  So that’s what this time machine repair guide does.

With that, I had my in.  The “corporate repair guide” angle gave me an absurd tone to play with, and it let me keep things funny, light, and entertaining, while still sharing actual (useful!) information.  The only challenge now was to fill the rest of the book.  No problem, right??

I began by researching the inventions I knew I wanted to include.  I’d always wanted to have computers in there – because come on, how awesome would it be to go through life knowing you can build a computational engine from scratch in any time period you care to name? – so that’s where I started.  And I discovered something fascinating: once we’d invented electrical logic gates – the things modern computers are based on – we started seeing them everywhere.  You don’t actually need electricity.  You can build logic gates out of ropes and pulleys.  You can build them out of water.  Heck, you can even build them out of living crabs.  And this meant that there was lots of potential there for a knowledgeable time traveller to invent computers centuries – if not millennia – ahead of schedule.

I soon found that it wasn’t just computers that could’ve shown up much sooner in history than they actually did.  I was honestly shocked to discover how many inventions fit into this category.  An example: we had the raw materials for compasses in 200 BCE: that’s when we noticed that some rocks stick together, or in other words, discovered magnets.  But it wasn’t until 1000 CE that we actually invented compasses.  And here’s the kicker: to get a basic compass (which, I remind you, unlocks navigating the entire world), you don’t need the “tiny sliver of metal balanced on a pin wrapped in plastic” fancy compasses we have today.  You just need to tie your magnetic material to a string.  The string lets the rock rotate freely, the rock points towards magnetic north, and hey presto: that’s your compass.

Figuring out how to tie a rock to a string took us over 1000 years.

You might think that’s embarrassing (and, you know – you’re not wrong) but I actually found it really inspiring.  And the more examples I found of low-hanging fruit throughout history, of inventions that could’ve been invented at any point in time but which for one reason or another we only figured out relatively recently, the more inspired I got.  Sure, it meant there was tons of room for a time traveller to optimize our timeline (great for my book!) but also meant that it was – and is – very likely there’s still things like that in our own time that we ourselves haven’t yet figured out.  What are we missing today, right now?

That last one is actually the one question How To Invent Everything doesn’t answer.  What fundamentally world-changing invention are we not seeing, even though we’ve already got all the parts we need?  What will people 1000 years from now laugh at us for not figuring out already?

What’s the equivalent of tying a rock to a string, for those of us living here at the end of 2018 CE?

I probably won’t be the one to figure it out, but I can’t wait to see who does.

← My Home Internet is Down and My Cell Phone Hotspot Connection is Totally Crawling so No Whatever Digest Today
1998/2018: Whatever 20/20, Day Twenty-Five: Writing →