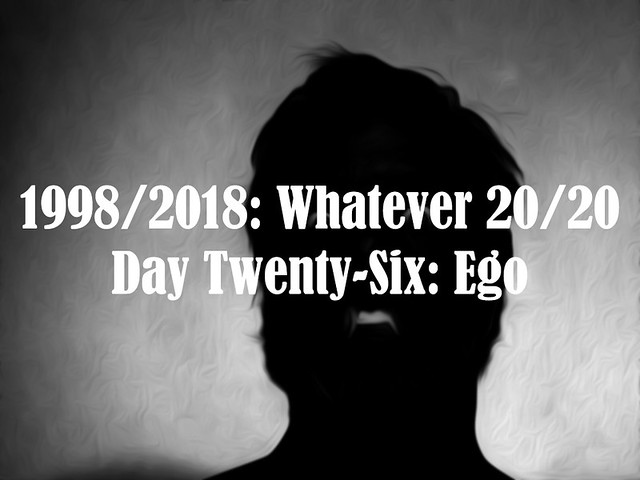 Oooooh, I’ve always been an ego-filled little doofus. I do think at this point the ego may be better justified. And also, I’ve worked to change where my ego is centered.

1998, I will note, was a very important year for my ego. That was the year it took its first major hit, when I got laid off from my job at America Online. Prior to that I went from one ego-gratifyingly high from another. I got hired right out of college to be a movie critic! I was the youngest syndicated film critic in the United States! And then I was the youngest syndicated opinion columnist in the United States! And then when I went to AOL, I was their entire in-house writing and editing staff! (It didn’t occur to me to think that this might have been AOL being cheap — remember, I was looking at it from the point of view of ego.) At AOL I was editing my own humor magazine! And so on!

Then I was laid off and suddenly from the point of view of ego, I was nothing at all.

Why? Because in all that time I was centering my ego in what I was doing (and, to a large extent, how young I was when I started doing it) rather than, say, who I was as a person. So when all that was suddenly taken away from me, well. Let’s just say I didn’t handle it very well at all. There was a short period of time there where Krissy was genuinely worried that, as were were driving somewhere, I would just open the passenger-side door and roll myself out. To be clear, I never actually did plan that. But looking back at how being laid off hit me, I can also see why she had cause to worry about it.

I’ve mentioned here before how in the fullness of time I’ve come to consider being laid off at AOL one of the best things that ever happened to me. One reason among many for that is that it caused me to re-evaluate my own ego, and in what I invested it. I’m not going to say that I came out of being laid off a better person. I will say I came out of it with an at least slightly more balanced ego.

“Ego” is a funny concept in our culture, and I think having an ego is generally regarded negatively or at least somewhat suspiciously. If you say someone “has an ego,” there’s a general hint that the ego in question is undeserved or overinflated. That’s fine but I think ego gets a bad rap. Obviously if your ego is overinflated or unearned that’s not a good thing. But if you understand yourself and you can assess yourself well, then ego can be a good way to backstop yourself when others are pummeling you with negativity, or when you feel uncertain or unsure. I think it’s good to have an ego, if you know yourself and your talents.

Where is my ego centered in 2018? Mostly it’s centered in trying to be a decent person and in creating good work. Both of these concepts are ones that don’t need or require outside verification, although in both cases such verification can come, and be useful in letting you know if your own internal compass for either or both is off. But fundamentally, it’s about what one expects from one’s self as opposed to what you can show off to others.

Which is hard for me. I’m a show-off. I have my moments of vanity and pride and smugness. I like when people like my stuff and I like that people know of me. If left unchecked and unexamined, I run downhill toward pomposity and jerkiness. I can very easily exhibit all the negative things that people think of when they think of the word “ego,” even if it’s something else entirely. I think a part of healthy personal self-assessment is recognizing what parts of yourself aren’t the best parts, and can lead you to do things you’ll regret later. I’m not perfect in dealing with these things — we all work toward being the best version of ourselves rather than wake up every day being that person. But I do put in the effort.

(I should also note that to my mind, being a decent person doesn’t always mean being a nice person. I’m perfectly content to be less-than-pleasant to people who I think deserve it. I mean, sometimes I’m a jerk and it’s unwarranted, and when that happens, I try to back up and apologize. But sometimes, a person warrants me being something other than nice. When that happens, I don’t mind delivering.)

I’m fine with my ego as it is these days. I think it generally serves me well. I’m always looking to better calibrate it, however. I expect that will be the case for years to come.