My Internet is still mostly down, and I went through all of yesterday not knowing what was going on in the world. It was refreshing! Of course, some things still made it through. I understand our President was laughed at, at the UN. That’s all I got. Maybe I’ll skip today’s news too.

I mentioned yesterday that one of the things I did in NYC was meet up with a Twitter pal, and was delighted they were lovely in real life. Now the Twitter pal has tweeted about it, so I suppose I can say who it was:

Finally got to have coffee in NY with my Twitter buddy @scalzi. We’re already planning tea in London! pic.twitter.com/Pt2YnnBxEY

You may have heard of her. She’s written a few books.

And as I noted previously, she’s pretty great. We had a very good conversation about topics of mutual interest and otherwise just hung about and enjoyed each other’s company. We’ve known each other online for a couple of years so it was nice to close the loop and have a moment to say hello in the offline world, and discover we like each other out here, too.

You may have noticed that I said nothing about it, other than a vague comment about meeting a Twitter pal, up until this moment. That’s because while it’s no big deal when I tell people where I am and what I’m doing, it’s different with people who have literally created a substantial portion of the popular culture of the entire planet. A little discretion was in order. It’s a reminder that I don’t talk about everything here. I just give the appearance of doing so.

In any event, a fine time.

Someone knocked over a vase on the kitchen table yesterday, and while we can’t say with 100% certainty who it was, we did get a partial photo ID: 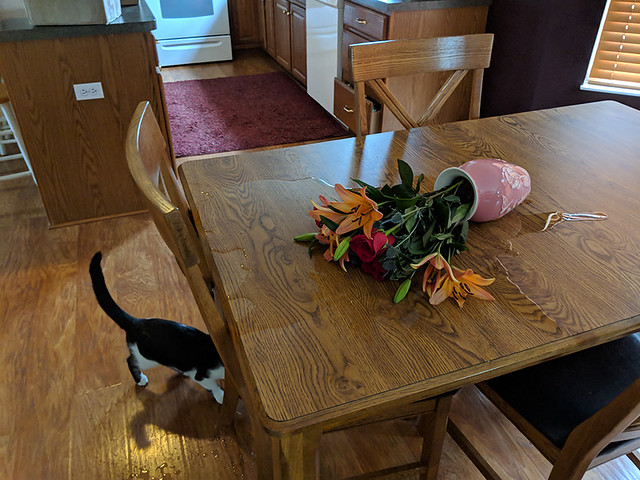 Yes, that’s Smudge, the adorable little jerk. He also, and don’t ask how, knocked a bit of plaster off the ceiling. Basically, he’s a troublemaker. I’ve got my eye on him. The problem is I have other things to do, too. And he knows when you’re not watching.

And that’s all I have because I haven’t checked the news and also because life here in Bradford, Ohio is kind of delightfully boring at the moment? And the big highlight of my yesterday was lying on the couch watching movies while a cat slept, purring, on my chest? That’s okay, yes?

Taunting the tauntable since 1998
John Scalzi, proprietor
Athena Scalzi, editor/writer
About the site