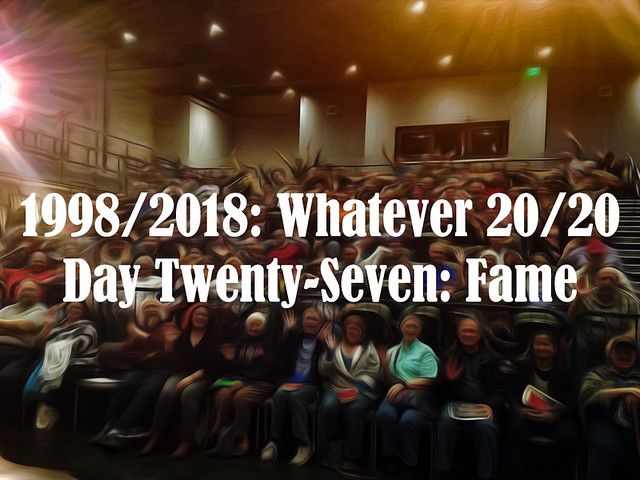 I touched on fame (such as mine is) briefly before in this series, but I was asked to expand on it a little. The topic I had scheduled today was pretty nebulous, so, sure! Let’s swap this one in instead.

I usually start any discussion of my fame by noting that I am not, in fact, actually famous. I am, at best, situationally famous. Which is to say, put me in a science fiction convention or a literary festival or on a book tour, and for the time I’m there, I’m notable, and a celebrity, and someone people are excited to meet, provided they match the face with the name. Take me out of those contexts and I’m just another middle-aged dude. I have on very rare occasions been recognized outside of context; enough that it’s amusing, not enough that it’s tiring and intrusive.

But in 1998, I wasn’t really even that. Prior to that date, I had been a minor local celebrity in Fresno, California, because I was a film critic and columnist there. and my picture was in the paper next to all my articles, and I would be on local radio and talk shows. That ended in 1996, when I left Fresno for a job at America Online. After that I was just another dude working at a tech company, and then, after I was laid off, just another dude freelancing.

There was some notability (or notoriety) attached to my name after I started Whatever, since I was one of the early adopters of the blog format and I was putting material out there regularly, and I, uh, wasn’t shy about my opinions. Was it fame? I don’t know. The joke about the early blogosphere was a take-off on Warhol’s prediction that in the future everyone would be famous for fifteen minutes — “In the blogosphere, everyone will be famous to fifteen people.” That wasn’t inaccurate! There were a lot of blogs with a small but committed group of readers, and to those readers, you were someone, because you were who they read. After Whatever debuted and for a few years afterward, I was “famous” to a few thousand people.

My real punt into fame, if you want to call it that, happened in 2006, and I can very specifically tell you when it was: It’s when Old Man’s War was nominated for the Best Novel Hugo Award, and I was also nominated for the Campbell. That was an unusual enough combination (I was the first to manage it in two decades) that in the science fiction community I stopped being just another writer, and became someone of note, starting an upward trend that (for the moment, anyway) more or less maintains.

All of this is pointing around the concept of fame rather than pointing at it — it’s leaving unaddressed the question of what “fame” actually is. I think the answer to that is actually pretty simple. At the very root of it, you’re famous if the number of people who know of you is higher than the number of the people you know of. Everything else about fame is elaboration.

So let me go back to my initial statement, that I am not, in fact, actually famous. Well, in fact, by the definition I just outlined, I am famous. Since 2005, I’ve sold a hell of a lot of books; the people who read them have some inkling of who I am. A certain subset of those readers have gone out of their way to buy more than one of my books, and for a certain subset of those readers, I am one of their favorite authors. Even if we were to consider just the third set, it’s a number of people larger than I could credibly get to know in any real sense.

So I’m famous after all!

The thing is, by this definition, so is your high school principal, if you went to a large school. The definition isn’t wrong, but it’s not all we mean by “famous,” or really what we think of as “famous.” Your high school principal isn’t famous like Gal Gadot (to pull a name out of a hat) is famous; neither am I. So what else is going on with fame, besides more people knowing you than you know?

Those other things include but aren’t limited to: General positive associations about you (if it goes the other way, you’re infamous), actual recognition in public, a personal investment in you and/or the things you do, and a certain amount of fictionalization of your being. The first three of these are easy enough to grasp. The fourth one means that people create version of you inside their head, which may or may not be the person you are on a day-to-day basis, which they then use to model how they feel about you, and use to imagine how you are thinking about things and why you do the things you do.

So, Gal Gadot: Most people think positively of her, because she’s playing Wonder Woman, and who doesn’t like Wonder Woman; a large number of people would notice her if she were walking amongst them; people are invested in seeing more of Gadot, as Wonder Woman if nothing else; and I’m pretty sure people who know of Gadot have a version of her in their head (the one in my head seems generally nice). Add on the sheer number of people who know of her, and guess what? She’s pretty famous overall.

What about me? Well, I’m famous to an exponentially smaller number of people than Gal Gadot, but still enough that I can’t keep track of them all, so that’s our starting point. I think most people who think of me think positively of me, although I know of people who don’t. I’m generally not recognized in public, although on rare occasions I am. Many people are hoping I will continue to write books. And, I speak from experience that there are all sorts of fictionalized versions of me out there, some of them, uh, highly speculative versions of me. So I’m famous-ish? If Gal Gadot has “A”-list general fame, my level of general fame is around “H” level at best.

An even more simple version of this is what I call the Supermarket test: Can you go to the supermarket and shop for any period of time without being bothered? If you cannot, you are famous (or infamous, as the case may be). I can shop unbothered at any supermarket in the United States. Gal Gadot probably can’t. She’s actually famous; I’m actually not.

Which, as I’ve said before, is fine with me. The level of fame I have is enough for my ego gratification, and to open some doors I’m happy to have open. It’s not enough that simply existing in the world is enervating, or that when I meet people I have to always ask myself what they want from me. I don’t have to have bodyguards or assistants to run defense. I don’t always have to be on.

(But you might one day! Maaaaaybe? If any of the film/tv projects get off the ground and become so amazingly popular that they start rewriting common culture, then I might not get to go to the supermarket anymore. But even if the film/tv projects hit the stratosphere — and that is a huge if — I think I’m mostly safe. One, I’m still a writer, not a tv or film star. People are interested in my words more than my face. I’m working in the background, not the foreground. Two, unlike some writers (like Neil or George or Pat), I don’t have a very specific look; I pretty much look like every other balding, middle-aged white dude out there. Three, I mean, I’m almost 50 and I’ve been doing this novel thing for a decade and a half now. I’m way past being the hot new thing. It’s possible I’ll become more famous than I am now, but I suspect that would mean moving from “H” level fame to “E” level fame. You can still go to the supermarket at the “E” level.)

Looking back at 1998 me, I’m pretty sure he wouldn’t have minded being a little more famous than the 2018 version of him currently is. But the question to ask there is whether he would have wanted that because it’s a level of fame he wanted for itself, or whether it’s the level he expected he would need in order to do the things he wanted to do. My guess (having been that person, and looking back) is that it was about 20% the former and about 80% the latter. The good news for 1998 me is that he got to do all the things he wanted to do with his writing anyway, so that worked out nicely. Likewise, time and experience has suggested that if he had gotten the level of fame he thought he wanted, he wouldn’t necessarily have been happy about it.