Let’s start with a cat picture, shall we? 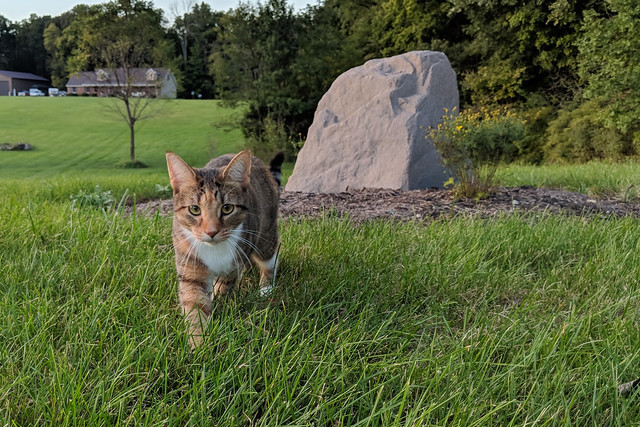 There. Whatever else happens with the day, you’ve still had a cat picture. And that’s something!

No, I won’t be watching the Kavanaugh/Ford thing today. I have a very nice television and I don’t want to break it by throwing a shoe at it. Also, my home Internet is still down (the technician is coming today, presumably; presumably they should be here by now, so you can tell everything is going swimmingly there), so watching it there is probably iffy. I could get the live feedback from Twitter, but that’s going to be nothing but rage, even if justifiably so. My plan is to catch the transcript after. Reading will be quicker and probably slightly less infuriating.

I’m still flummoxed — but I suppose I’m not, really — at the GOP’s utter persistence with keeping Kavanaugh as their pick for the court. Court nominees have been derailed for much less than this, Kavanaugh is deeply unpopular, and he is causing the GOP to hemorrhage support from women. Again, the optics of the GOP pushing hard to seat on the court a man credibly accused by three women in sworn affidavits of sexually harassing behavior, to be the key vote in overturning Roe v. Wade (or simply whittling it down to nothing while still technically keeping it on the books) is the perfect example of a pyrrhic victory. But then today’s GOP is not much for thinking ahead; it’s how it got Trump.

I’m also less than sympathetic to the GOP and its supporters being outraged that Kavanaugh is somehow being held to the same standard that the GOP expects everyone but them to be held to. The mewling about they’re destroying an innocent man! when they would literally leap over their hobbled, inform grandmothers to do the same to anyone else in a similar circumstance (and have) is instructive. Also, it’s pretty clear that whatever Kavanaugh is, “innocent” almost certainly isn’t it; we have more than enough testimony to strongly suggest that in high school and in college, he was an arrogant, harassing piece of shit, surrounded by other arrogant, harassing pieces of shit.

Now, you may or may not think that it’s fair that he’s being judged today on being a harassing piece of shit in high school and college, but remember that not all that long ago, we had at least one candidate for the Supreme Court withdrawn because he smoked pot in college and immediately afterward. If we’re going to disqualify someone for toking up, I think we can take seriously some college-age sexual assault. Kavanaugh should have been dumped some time ago; if these were normal times, he would have been dumped some time ago. These are not normal times.

Oh, but hey, Cosby’s in prison now! So that’s something.

My local newspaper wrote up a story about me meeting up with JK Rowling, based on our mutual tweets about the meet-up; I didn’t speak to the paper about it and had no knowledge the (brief) story was being written up, so I was surprised and amused when I saw it. I’m not entirely sure our hanging out rises to the level of actual news, but then again, this is a classic “local man leaves town, does a thing” sort of story, isn’t it. I’m glad they were excited. I wonder what they would do if I told them I had dinner with George RR Martin last month.

The story wondered if Rowling and I were intending to do a project together, and the answer to that is: Outside of possibly meeting up again when I’m London next year, no. Not everything is about business. Sometimes you hang out with people just because you want to hang out with people.

There, we’re all caught up. Let’s get on with the day.