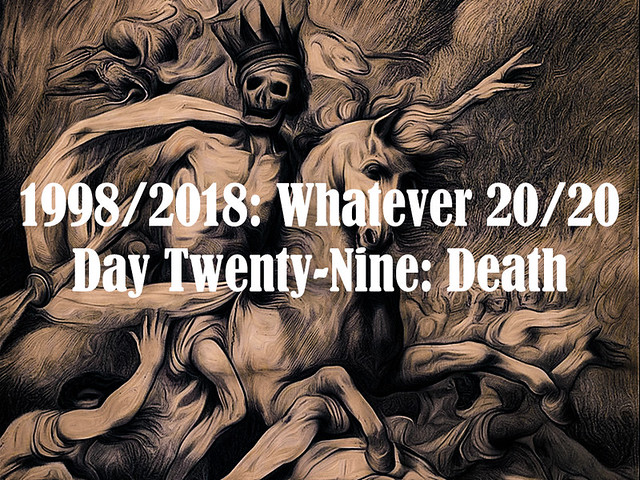 Not that I knew that in 1998, by which I mean I couldn’t have been 100% certain then I would reach 2018. Statistically speaking, it was likely in 1998 that I would live another 20 years, in that I had no major chronic illnesses or habits that would put me within death’s grasp — I didn’t indulge in hard recreational drugs or do daily BASE jumps or anything like that. But you never know, do you. Car crashes kill a lot of people annually, and I do regularly drive or am carried in cars. Perfectly healthy people randomly develop cancers. I’ve slipped down my stairs at least four or five times in the last twenty years, each time ending in nothing worse than a bruised tailbone, but each time it could also have been worse. I could slip in the shower and klunk my head. That does in a whole lot of people. There are lots of statistically not improbable ways to die young, before you even get to the unlikely but flashy ways, like lightning strikes or bear attacks.

For example, raising my kid. Aside from the personal desire to not miss any part of her childhood, there is also the fact that, provided you’re not a terrible parent of the sort children write gut-wrenching memoirs about later, after years of therapy, it messes up kids to have parents die while they’re still growing up. I wouldn’t have wanted to have my own kid go through that, if it was at all avoidable. I wouldn’t have wanted to miss out on the experience of being a parent to her, and being a parent along with Krissy.

I wouldn’t have wanted to miss any part of the last twenty years with Krissy, either. She’s pretty great, you know, and I’m a better person because I’ve gotten to be with her. I wouldn’t be the person I am without her, so in a way I would be incomplete as a person if I had had to leave her at any point in the last twenty years (it’s not to say that here in 2018, I’ve been perfected. I still have work to do. I’m just further along). The same thing applies to my friends, both the ones I’ve known for the full two decades, and the ones I’ve met since 1998, some of which are now among my best friends. I think of the people I’ve gotten to know, and would be sad to have missed any of them, and the experience of having them in my life.

And then there’s the other stuff. My life’s work, as it were.

Look. With work, I try to practice what I call a philosophy of sufficiency, which among other things means looking around at what you have and saying, if this is what I get, it’s been enough. This has meant that when I hit any particular milestone in my writing life, I could be happy with that in itself and not necessarily worry about what might come next. So: I’ve written a novel? Awesome, no matter what, I’ll have done that. Sold and published the novel? Cool, I’ll always have been a published author now. Been asked to write a sequel? Groovy, the books have done well enough that people affirmatively want more. And so on.

I’ve not been perfect practicing this concept of sufficiency; when I won the Hugo for Best Novel, one of primary emotions I felt was relief, because now this was a thing I didn’t have to worry about anymore, which meant I had been worrying about it. But even when I slipped, I still had it as a practice: Be happy with what you have achieved. Enjoy the moment you’re in now, because you don’t get to go back to it later. Plan for tomorrow but don’t neglect today, because today will always be a thing you did.

For the last twenty years, at every step, I practiced happiness at where I was at. At the same time there were still things I wanted to do, and things in my career I wanted to see if I could achieve. I like to think I could have been happy with where I had gotten, if I had suddenly needed to go and this, whatever this ended up being, was as far as I got. But there still would have been other things I would have wanted to do in my career, or at least, to see if I could do them. In 1998, there were a lot of these other things.

Now it’s 2018, and guess what? I kind of did everything I wanted back in 1998, and even before then. Or, to put it in another, more relatable way: I got to be the person I wanted to be when I grew up.

It doesn’t mean there aren’t still things I want to do, careerwise. I think it would be nifty if anything of mine ever finally made it to film or TV, for example, and there are a few other things I’d love to do, with my writing and in other areas, before I shuffle off. But in a sense all of that is gravy. My philosophy of sufficiency tells me that what I have already gotten is not only enough for me and my career desires, but that I’ve gone beyond that now. Not matter what else I do, I feel like I’ve hit all my marks.

So now I’m ready to die!

Well, no. Not precisely. I’m very happy to stick around for a while yet. There is more for me to see and do, including the things I don’t even know I will be happy to experience when they happen. What I am saying is that for the last few years I’ve felt like, if something happened and I had to go, I wouldn’t be saying, “but wait –“. For the last few years I’ve been feeling that if this was all that I got, that it’s been more than enough. That I’ve done enough, seen enough, loved enough and been enough that it would be okay to go, if I had to.

Which is kind of a weird feeling, I have to say. Again, I’m not in a rush to die. I like existing. I don’t believe in an afterlife so I don’t believe I’ll exist as a consciousness after I die. I won’t be anymore, except in the abstract manner of my writing (hello!) and in the memories of other people. I’m not scared of death, but it does make me sad. Existence is pretty great, or has been for me.

But it’s not like we get a choice in the matter. We all die. Sooner or later, our brief moment here is gone and what we had is all we’ll ever have. At 49, I’m perfectly happy to have another decade or four (or six!) before I have to go. But it’s a comfort, in an existential sense, to feel like one has done enough with one’s life that leaving meant no unfinished business left behind.

That’s where I am now, at least. I wonder if 69-year-old me (or 89-year-old me!) will look back on these words and think, oh, kid. You have no idea what else life had in store for you. I kind of hope he does, and that the years in between now and then were also enough, in their way. I’ll let you all know, if I get there.