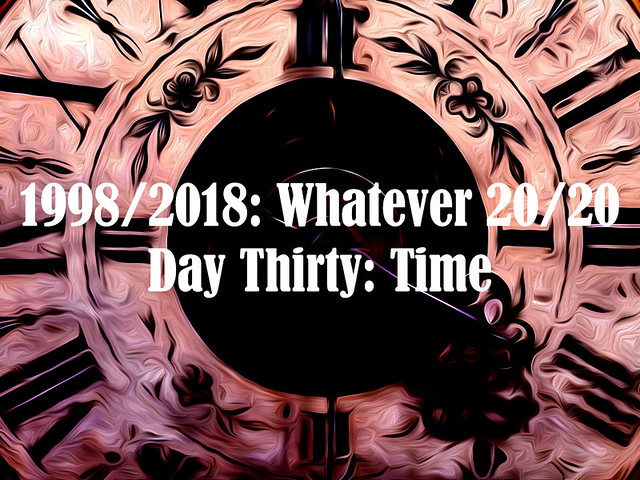 This entire series is about time; it makes sense to end it with a piece directly on the subject.

There are a number of ways for me to consider time, particularly since 1998, the year in which I started Whatever, and the point in which, for the purposes of this series, I start considering the world and my place in it. I could say that now, twenty years on from 1998, I have less time than I did then. Time is ticking, I’m not getting younger, and all that. Conversely, however, I’ve had more time since then. So many things have happened — the birth of my daughter, the debut of my novels, all the joys and successes of the last two decades — that I could not have imagined when I first sat down in September of 1998 to write that first Whatever post.

Should I be sad that I have less time now? Or happy that I have had more time since then, for all the wonderful things and people in these last twenty years?

It’s a trick question, I think. I have neither more time nor less time than I had in 1998. I have always had the same amount of time, and that amount of time has always been finite. What’s true then is what’s true now: That I have no idea of how much time I have, except in a highly generalized “here’s what the human life expectancy is on average” sort of way. But whatever that amount of time is, it’s what it always has been, in a very real sense. Just because I currently don’t know its reckoning doesn’t mean it’s not eventually knowable. I will know its total length soon enough (I mean that in a geological sense. Again, I’m in no rush).

In the Sandman comics by Neil Gaiman, there’s a scene where the incarnation of Death is doing her rounds. She meets up with someone who have lived a very long time, and who wonders if that long lifetime was enough. Death replies that he got what everyone gets: One lifetime, no more or less. In one hand, that comment is literally comic book sophistry, but on the other hand it is also absolutely correct. We all get one life, no more, no less. When it’s gone, it’s gone, and the time of it, in a very real sense, won’t matter. Every moment of time we have will collapse into the singularity of the past, gone and inaccessible. Live for a day, live for a hundred years, what eventually comes of it is a single point of fact: You existed.

It’s an equal and banal truism that it’s not the years in your life but the life in your years. There have been people who have changed the world and their culture who lived a relative handful of years, and people who have lived for a century who, as far as anyone outside their immediate family are concerned, have done nothing notable other than to simply not die for a statistically rare amount of time. The old joke is “by the time Mozart was my age, he’s been dead for [x] years,” which is a reminder that life ultimately is not about the amount of time but what one can do with it.

But at the same time I kind of hate that formulation. Yes, by the time Mozart was my age, he’d been dead for fourteen years. But at the age Mozart died, I was only just then having my first novel published — everything I am likely to be remembered for, to the extent that I will be remembered at all, happened to me after the age of 35. Does this mean I was wasting my time before that age? No, it means that whatever was required for me to create, and be in a place and time where my novels could be published, took place in that time. No time was wasted, because I was becoming the person who could write novels that people wanted to read.

Which is to say that the “life in your years” doesn’t mean you have to hit the ground running, achieve everything before you wrinkle and die leaving a beautiful corpse. The “life in your years” can be at any point in your years, and can be in all of your years. Nor does it mean, with apologies to Mozart and even to myself and my scribblings, that you have to do something intended for the world to see. The person who mindfully lives a just and moral and kind life has lived a life with value beyond themselves, even if no one other than their closest friends and family ever know of them.

So what if no one else ever knows them? Because that is a thing, too: We all get swallowed by the singularity of time. Some resist its gravity longer than others but eventually we all fall beneath its event horizon. Time claims most people when the people who remember them pass on; creators are claimed when their works lie unread or unseen or unheard (or unattributed). The time I will be remembered will likely be more than your average accountant and less than Mozart. But even Mozart’s memory will have its time and then it will be gone too.

Don’t worry about Mozart. He’s beyond caring. As I will be, and as will that accountant. We’ll have had our time, and made our marks, or not, and will have moved on. We will have our lifetime, no more or less. And then it and we will be gone, and time will have moved on, and other people will have their one lifetime, with all the time they will ever have within them as well. It’s how it works. It’s how it’s always worked.

I try not to worry too much about the time I have left. Aside from basic maintenance like diet and exercise and not going out of my way to taunt grizzlies, it’s not up to me. I make plans and work toward a future I want (and for a future beyond what I will see myself), and do so with the realization that not everything I plan may be realized in my lifetime. I am glad for the time I have had, for the experiences and joys and the people in it, who have made my time so heartbreakingly wonderful.

And you might ask, well, what’s even the point? If it all passes in time, even the universe, why do anything?

Well, what else are you going to do with your time?

But more completely, just because we all eventually stop having time doesn’t mean the time you have doesn’t matter — to yourself, to the people who love you and who you love, or even to the world. You live in a vanishingly small slice of time, true. But in that vanishingly small slice of time also exists the whole of the universe, and billions of people, and everyone you will ever meet and know and care about and love. You can use your time caring about them and for them, celebrating their joys and healing their sorrows, telling them stories and singing them songs and painting them great canvases of color. What you do matters when you do it. It may even matter when your time has passed.

Not forever — nothing lasts forever — but remember: “The life in your years.” In this time, and in your time, you can do things that mean something. You can mean something. For enough time to make a difference.

I’ve had 20 years writing here on Whatever. It’s given me joy, helped me make sense of myself and the world, introduced me to dear friends and has literally changed my life. I don’t regret any of the time I’ve given to it, and am glad I have taken the time to do it. I don’t know how much more time I’ll write here — one never knows! Time is like that! — but until the time I stop, however it is I stop, I plan to enjoy the time I spend writing it.

I hope you will, too. Thank you for taking the time to read it, and me.