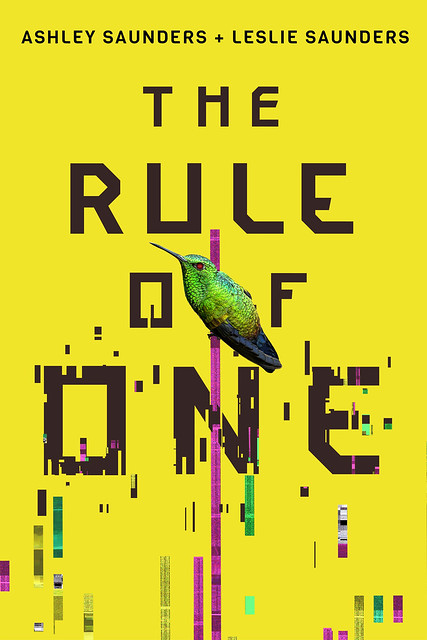 They say write what you know, and thus twins Ashley and Leslie Saunders and have written The Rule of One, a novel about twins. But there’s so much more to writing than writing what you know. Here’s how the Saunders imagined in stereo.

That’s the central question we asked ourselves when we started brainstorming The Rule of One. We knew we wanted to tell a story about twin sisters and we wanted it to be an adventure with high stakes. What’s higher stakes than twins being born into a world where their very existence is a crime?

Using China’s former one-child policy as inspiration, soon our minds were swimming with a future that included a planet that has reached well beyond its carrying capacity, bloated metropolises, crippling limited resources that drives the U.S.’s class system to a dangerous breaking point, and constant government surveillance with microchips implanted inside every citizen’s wrist.

We had our dystopian setting, now we needed our central theme: identity.

Our Big Idea: twins who have to pretend to be one person in order to survive.

Ashley: Our story is told from dual perspectives; being the eldest twin, I wrote all of Ava’s chapters, who is also the older sister. Ava is the one who gets the life-validating microchip implanted into her right wrist at birth. She is the identity that both sisters build their entire lives around– Ava is the only one to truly exist in a Rule of One America.

In real life as children, Leslie and I would come home from school and tell one another every single tiny detail of our days. We became such experts on each other’s lives that we could sub in for each other if someone got us confused. Pulling this from our own lives, we amplified our nightly ritual with Ava and Mira. If they aren’t perfect when it’s their “turn” above ground (the other sister must stay hidden in the basement), they will lose everything. As the first born, Ava sees it as her duty to ensure the safety of her sister– a large portion of her identity is tied up in being the designated guardian.

Writing Ava’s chapters, I always held foremost in my mind how I would react if it was me who was branded a traitor and forced to leave my childhood home, fleeing into the unknown, all while trying to protect my twin sister, the person whom I love more than anyone else in the world.

Halfway through writing the novel, Leslie and I took a pause and decided to travel the exact cross-country journey our characters take in the book. While researching a location in Palo Duro Canyon, we were stalked by a bobcat and those thought-experiments suddenly became reality. Isolated in the wilderness, I felt sheer terror, and on instinct we decided to run. I had no weapons, just like Ava, and the entire three-mile sprint back to our car the bobcat was growling, and I envisioned the animal attacking my sister. We made it (or else I wouldn’t be writing this) and drenched in sweat, I immediately wrote down every emotion I was feeling. I’ve never felt more connected to Ava as I did in that moment, because the terrifying experience revealed to me that just like Ava, I would do anything to protect my sister. And just like Ava, in that life-threatening ordeal I saw myself as the leader, the one needing to do the saving. But when I looked over, Leslie had a razor-sharp rock in her hand, ready to do her own protecting.

I knew then why it was so important for Mira to step out of Ava’s shadow to become her own woman. Free from the necessity of mirroring Ava’s identity, Mira could be the hero of her own story.

Leslie: Like Mira in our story, I am the youngest twin. I therefore took the reins writing all of her chapters, using my experience growing up as the second born, infusing my own personal experience into Mira’s desires, arguments and character arcs.

Have I ever been jealous of my twin sister, Ashley? Yes. Have I ever thought that she was better at something than me? Sure. Do I ever grow tired of being compared to her? It depends what kind of day I’m having, but let’s go ahead and say absolutely. To imagine these questions in a future world where my very existence was illegal, and I was forced to share an actual identity with my twin sister really got the wheels in my mind turning. Like at top speed.

What if I not only shared clothes, the same interests, and most importantly, identical features with my twin, but in order to have any life at all, I had to be my sister. We had to share a name, a personality. An existence. The love I have for my twin knows no words- like Ava and Mira, we are inseparable. But I am a fierce individual and I have my own identity. To infuse a character study of twin sisters with my love of high-stakes adventure was really a dream project for me. Writing the POV of a youngest twin who goes on a journey of self-discovery was both exciting and cathartic.  I don’t think I’ll ever write something more personal. Yes, it’s set in a near-fi America about twins being chased by the government. But Mira feels like me: a young woman trying to discover who she is.

As Ava and Mira’s story expands beyond the first book, it’s been a fun ride shaping their individual identities while still remaining true to their inseverable bond. No matter how much they change, they will always be identical twin sisters. Two bodies, one soul.

Fighting to survive in a world they don’t belong.

1 Comments on “The Big Idea: Ashley and Leslie Saunders”