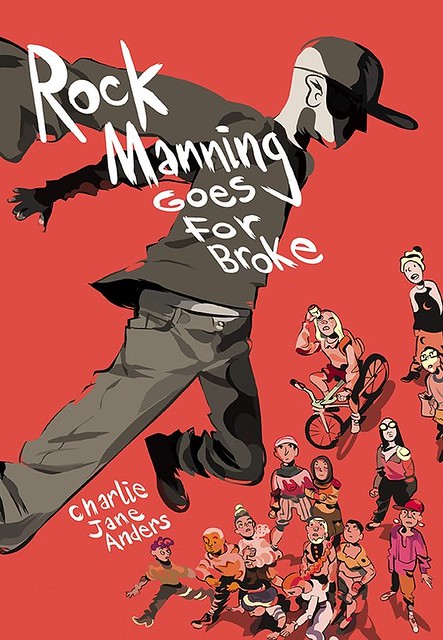 Comedy! The Internet! Incipient fascism! Charlie Jane Anders has got it all in her latest, Rock Manning Goes For Broke. She’s here to explain it. There are footnotes!

What happens when Comedy goes TOO FAR (and then just keeps going)?

Supposedly some famous dude said on his death bed, “Dying is easy. Comedy is hard.”* Nobody seems to agree on who actually said this, and whether anyone actually ever said those exact words. But in any case, this is a crock of shit. I’d way rather write comedy than be dead, and I think dying will probably be pretty fricking difficult. I fully expect that after I finish dying, I’ll have no energy left for anything else.

And I know you’re not supposed to admit this, but comedy has always come kind of easy to me. I love coming up with the most ridiculous thing that can happen in any situation, and the silliest thing someone can say or do. I grew up reading Henry Fielding and Douglas Adams and PG Wodehouse, but also watching everything from the Keystone Kops films to reruns of the Mary Tyler Moore Show. I love the moment when everything just spins out of control and vehicles are sailing off cliffs and people are throwing mashed potatoes in each other’s faces and the world is just spiraling into chaos.

Partly, I feel like those demented moments of out-of-control physical comedy are when we come closest to glimpsing the true nature of reality. In real life, everything is chaos**, nothing is ever really under control, and we’re all one banana peel away from hilarious disaster. And partly, those moments are just really, really fun to write.

So back when I started writing Rock Manning Goes For Broke, I was obsessed with physical comedy in particular, and just seeing how far I could take it on paper. And here’s what I found out: the more you take physical comedy to its furthest extreme, the more you start blurring the lines between “hilarious” and “terrifying.” Because when slapstick hijinks go really to enough of an extreme, they start to look more and more like regular violence and mayhem.

This wasn’t really that much of a surprise, to be honest. There’s a reason why Jackie Chan breaks several irreplaceable bones in every other movie he makes. And anyone who’s ever dipped into “splatstick” or the burgeoning genre of horror-comedy knows that slippery gory monstrosities can easily cross over into being hilarious. (See Peter Jackson’s Dead Alive, Brian Yuzna’s Society, or dozens of other bizarro funny horror films.)

The main character of my novella, Rock Manning, is an aspiring comedy performer who wants to follow in the stumbling footsteps of Chan, along with Harold Lloyd, Buster Keaton, the Three Stooges, Charlie Chaplin, that dude from The Tall Blonde Man With One Brown Shoe, and countless others. And luckily, Rock’s best friend Sally Hamster has a video camera, an eye for great set pieces, and an almost limited reservoir of sadism. Soon, they become Famous On The Internet—just as society is crumbling and the United States is teetering on the brink of a fascist takeover.

A lot of the energy in Rock Manning Goes For Broke comes from the increasingly bizarre and high concept films that Rock and Sally are creating and posting online. Including things that honestly ought to be their own genres, like “Vacuum Cleaner Salesman vs. Roman Gladiator,” or “making an ice cream sundae on top of a hearse going 90 miles per hour.” These kids view danger and narrative consistency with equal measures of steely disdain.

But also, I got a lot of juice, storytelling-wise, from the collision between off-the-chain physical comedy and the brutality of incipient fascism. Rock and Sally’s high-school classmate, Ricky Artesian, becomes part of a brand new “militia” called the Red Bandanas, who aim to “clean up” America with a mixture of fearmongering, manipulation and extreme violence—and they want Rock to star in some propaganda films promoting their movement.

I know I started this essay by saying that comedy is way easier than that dying guy thought***, but the ugly flowering of fascism is surprisingly hard to make light of. Everyone from Chaplin (in The Great Dicatator) to Mel Brooks (in The Producers) to the makers of Hogan’s Heroes has lampooned the Nazis, but they’re still terrifying and abhorrent monsters. All the things that make a pie fight**** hilarious are also what make a swarm of real-life brownshirts pants-wettingly scary: the chaos, the indignity, the loss of control.

But when comedy goes Too Far, it not only gets closer to being a warped version of our worst night terrors—it also lets us start to ask questions about our propensity for organized violence. And that moment when the mayhem stops being funny and turns ghastly is a good preparation for the real-life moments when we witness atrocities right in our backyard, and it’s on us to do something to stop them.

* This whole fetish for saying pithy things on your deathbed always perplexes me. Why would you want to waste a clever line on a moment when nobody can possibly appreciate it? Plus to be honest, my last words are probably going to be something along the lines of “ow, this fucking hurts, you fuckers,” or possibly, “I want a discount on my hospital bill because these goddamn peas were still frozen on the inside. Let me speak to a manager. Yes, I will hold.”

** The difference between fictional chaos and real-life chaos is that you can at least sometimes enjoy fictional chaos, because it’s a lot harder to giggle with abandon when actual reality is getting torn to bits by flying doll-heads and exploding chickens and stuff. Actually living through a huge screaming mess is surprisingly not that much fun at all.

*** I feel very comfortable picking on that guy, because he’s dead, and also he could be any one of a number of dead guys, none of whom know where I live.

**** I actually organized a Ballerina Pie Fight in real life. Ask me about it sometime.

← Sugar Watches You From Above
The News is a Trashfire Today, So Here’s a Rainbow →