From the movie A Star is Born, which comes out tomorrow. The song is surprisingly good — which seems like I’m damning Lady Gaga (who co-wrote it) with slight praise. I’m not meaning to minimize her talents at all (they’re pretty obvious at this point), but songs written for movies are often about something else than being a good song. This is a good song, and it seems to fit the movie. If I understand the story correctly, this is a song she wrote but Bradley Cooper’s character arranges with the intent of encouraging her to come onstage to sing it (and thus kickstart her path to stardom). Even in video you can see how that emotional interplay is working, and Gaga sells it perfectly. If the actual movie is as good as the moment the video covers, this is going to be a contender. 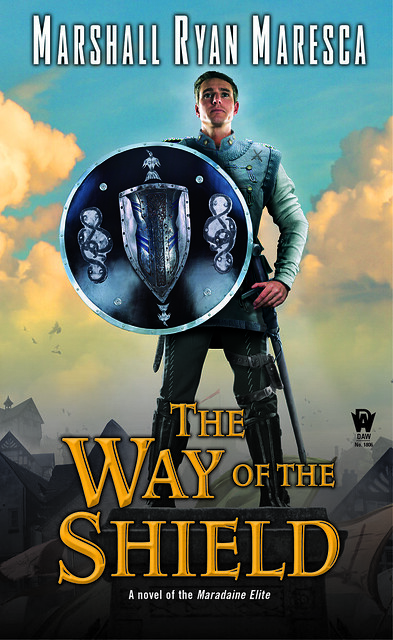 Are the old, and even quaint, ways the best? Marshall Ryan Maresca has thoughts on this, and how they affected the creation and development of The Way of the Shield.

Somewhere archived away in a box in my house, there’s a piece of paper with scribbled notes that I wrote in 2007:

And there it was—an idea: that I could bring together these characters, who could each tell their individual stories, but could also tell a larger story through the weaved threads of each narrative.

At the time, I hadn’t even written one novel— let alone four interconnected series—but the underlying ideas got their hooks into me too hard for me to ignore.  I had to do this, no matter how daunting and wild the idea was. So I dug in, radically reorganized my life, and got serious about the work of novel writing.  Over several years, those bullet points evolved into, respectively, The Thorn of Dentonhill, A Murder of Mages, The Holver Alley Crew and, now, finally, The Way of the Shield.

The process of developing these books created a paradox.  In writing Thorn, Murder and Holler Alley, I had created a world with a city constabulary, bustling infrastructure, elected Parliament and city council, standing military, and in the midst of social progress.  An ancient order of warriors with shields and swords seemed almost quaint.

Then I realized: that was the point.  It is quaint and outdated.  Here’s the Tarian Order, an organization with a deep and rich history in the culture, but with no formal authority or mandate. There were other Orders, but most of them were either disbanded or folded into modern organizations.  The only reasons the Tarian Order remains are tradition and inertia.  Most people only join as a path to improve their station.  But Dayne, my pacifist warrior, is a true believer.

Dayne is steeped in the history, enamored of the Order, and there is nothing he wants more than to devote his life to it.  Not to use the Order as a political stepping stone, and not just for mastering the physical discipline of the combat arts.  Dayne truly thinks saving every single life is the most important calling he can follow.  He wants to be the proud figure, standing tall with a shield, protecting the people and placing himself between them and harm.

But this changing world of modern politics rears its head again.  Dayne learns that he will not be promoted to full membership in the Order.  The Parliament holds the purse strings, and the Parliament gets final approval over the appointments.  Dayne failed to save the nephew of a powerful member of Parliament, and that member is making Dayne pay for his mistakes.

Dayne is left adrift: he has the talent, he has the passion, but he’s got no sense of what his future is going to be if he’s not able to be a part of this thing that he’s devoted his life to.  What is he going to do now, if he can’t be a Tarian?

Let me jump back to 2007, and that phrase I glided over a few paragraphs back: I radically reorganized my life.  That was a crucial moment for me to reach this point.  In 2007 I was working a job I hated. Hated.  It gnawed at my soul, and everything about my life was degrading because of it. Finally, I said to myself, “You’re 34 years old, and what are you doing with yourself?  Working this terrible job for terrible people, and hating everything.  You keep saying you want to write books, but are you?  No, you aren’t, and you need to.”

So I quit that job.  Which, let’s be real, probably wasn’t the best plan for a thirty-something husband and father with a mortgage, but it’s what I had to do.  Fortunately, my wife understood what was going on, and we came up with a new plan for our lives so we could continue on and I could also write.

Because had this idea—this mad, wild idea, at that point just a series of handwritten bullet points —and I knew I had to make it real.  I had to fight with everything I had to make it happen.  At the time, a lot of people called it impossible, said I wouldn’t be able to do it. No one was going to let me do it.

But yet, here we are, pushed forward with will and drive.  Four interconnected series in one grand, sprawling fantastical city.  With The Way of the Shield, the fourth piece clicks into place.

That’s the spirit I infused into Dayne: he has talent, he has passion, and when he’s told what he wants is impossible, he’s going to do it anyway.