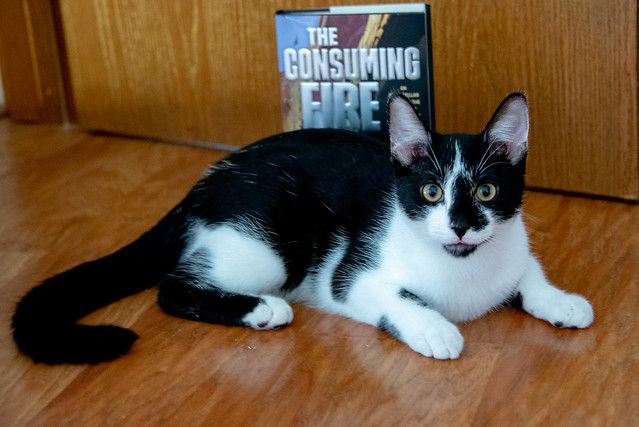 I got my author copies of The Consuming Fire! So now I’m going to give one away! Specifically, the one behind Smudge there. Also, I will sign it and personalize it to the winner or whomever they choose.

You want it? Here’s what you have to do:

I’m thinking of a city, in North America, featured in at least one (1) song that was a hit in the United States. Name the city.

1. You may guess only one (1) city. Also (and obviously) one comment per person. Extra guesses and posts are disqualifying. When posting your comment, leave a valid email in the “email” field, otherwise I will not be able to reach you (I don’t make your email public and don’t use it otherwise). All comments other than those guessing a city will be deleted.

3. In the event that more than one person guesses the city, I will tally up the number of people who correctly picked the city and ask Alexa to pick a random number between one and [number of people]. The person who corresponds to that number wins the book.

4. This contest is open to everyone around the world. I will cover shipping. However, if you live outside the US, it might take a while for the book to arrive to you. International shipping is weird.

5. I’ll pick the winner after the contest closes and contact that person by email for a shipping address. That winner will have the option for the book to be signed and personalized, to them or someone else.

And now, the hints:

1. The city currently exists and has people living in it.

3. The city is an incorporated city (or the equivalent in its country). 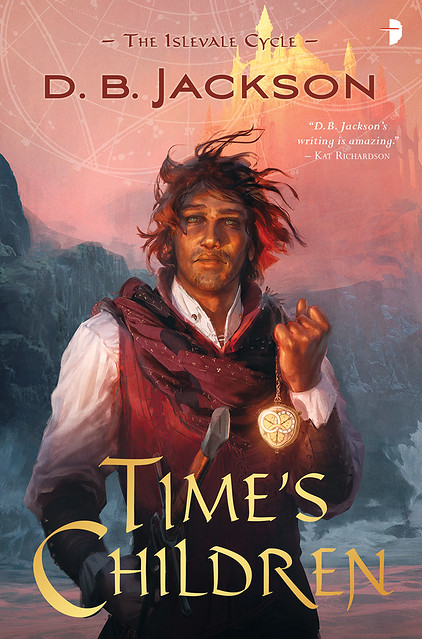 Think time travel is disorienting for the characters who use it? Think about the poor author who has to plot it! D.B. Jackson knows, and explains all the nitty-gritty details about it in this Big idea for Time’s Children.

Anyone who has written a time travel novel knows that they can send an author ‘round the bend. Time travel is a plotting nightmare. It creates narrative holes big enough to accommodate a truck. It acts as a virtual eraser, a do-over generator, a distributor of endless mulligans. Even the most sound, well-considered plot point can be undermined by the simple question, “Well, why can’t one of our characters go back and prevent this?” Hermione Granger’s ill-advised flirtation with Time-Turners is just the tip of the iceberg. Time travel will make an author’s brain explode.

So, naturally, I have just published the first novel in a new time travel/epic fantasy series.

In Time’s Children, volume one in my Islevale Cycle, Tobias Doljan, a fifteen-year-old time traveler – or Walker in the parlance of my created world – is sent back fourteen years to prevent a catastrophic war. Upon arriving in the past, however, he barely escapes an assassination plot that claims the lives of his sovereign, the royal court, and all of the royal family except the sovereign’s infant daughter, the princess Sofya. Tobias, with the help of his friend and love, Mara, who follows him back through time, must protect Sofya from the assassins, reestablish the royal line, and correct the dark, spiraling misfuture that his journey through time has unleashed. The book is fraught, but it’s also fun. It has action and suspense, assassins and demons, and lots of different kinds of magic. Because the time travel wasn’t complicated enough.

Those of us who write fantasy and science fiction often build into our magic or tech systems costs and limitations that limit their reach. Otherwise we risk allowing these world building devices to take over our stories. This is how I sought to keep time travel from robbing my book of all its narrative tension.

Time Walkers are rare in my world – I don’t have lots of them running around Islevale, undoing one another’s efforts. They cannot Walk without magically “Bound” devices called chronofors, which are also rare, not to mention dear. Walkers can go into the past, and then return to their original time, but they can’t explore the future. As they journey through time, Walkers must endure the “between” a harrowing, airless expanse that lengthens the farther back one travels. Walkers can only carry their chronofors when they journey – no weapons, no tools, no money, no clothing. If a Walker meets herself in the past, she might go insane.

Finally, and most significantly, for every year Walkers go back, they age that much. If a Walker is twenty, and goes back one year, she arrives as a twenty-one-year-old. And after she returns to her time, she is twenty-two. So, yes, my brief plot synopsis omitted a key detail: Tobias and Mara begin as fifteen-year-olds. When they arrive in the past, they are twenty-nine-year-olds, though their emotions and intellects remain the same. They are, essentially, children in the bodies of adults. If they make it back to their own time, they will be forty-three.

And that could easily be the big idea of the book. Adding that cost to my magic system creates tremendous narrative tension, drives a good deal of my plotting, and powers my key character arcs. Certainly, it informs elements of what I think of as the crucial themes of my book. But the central premise – the emotional core – of Time’s Children is somewhat more nuanced.

Allow me to backtrack for a moment. Early on, when I was still building my world and conceptualizing the novel, I struggled with my plotting. I usually outline novels, and this one was giving me fits. I had a conversation with a friend, and mentioned the problems I was having, and she asked me a simple question (I’m paraphrasing a bit). “What matters to you most? Not about the book, but about your life, your world. What are you most passionate about? Because,” she said, “that’s what you should be writing about.”

It took me all of two seconds to come up with an answer to her question: family. My wife and my daughters, and the love and laughter we share, mean more to me than anything. As soon as I realized this, I knew what Time’s Children and the entire Islevale Cycle are about.

It’s not just that Tobias and Mara have given up so many years of their lives, and it’s not just that they find themselves trapped in a broken past, their bodies and minds seemingly out of sync. What matters is their response to this singular circumstance. Their future is lost to them, at least for now. Sofya is dependent on them for food, for shelter, for love, for her very existence. And Tobias, before Mara finds him, is overwhelmed by the responsibility foisted upon him. I’m a parent, and I remember that feeling. I remember holding my older daughter the day she was born, and feeling both this unbelievable wave of love, and this panicked sense that I was barely more than a kid myself (even though I wasn’t that young when she was born). How on earth was I supposed to be a father?

What I soon realized was, I had a partner in this. Nancy and I had been a couple, but now we were a family, and together we would get through whatever we had to.

That’s what Tobias and Mara find. The only way they can cope with all that has gone to hell since Tobias Walked back in time, is to create a family out of ruin. In their case, the “family” begins as a deception, a way to conceal Sofya’s identity and spirit her to safety. But as this book ends, and the series goes on, their family coheres into something more powerful and more real. It continues to be a façade, but it also informs their relationships. Out of tragedy and danger and loss, they create a refuge built on love and loyalty and devotion not just to one another, but to the greater unit they have formed.

This sounds heavy, I know. Again, these really are fun books. But at root, they are about creating and relying on family under the most trying of circumstances. And that’s the big idea. 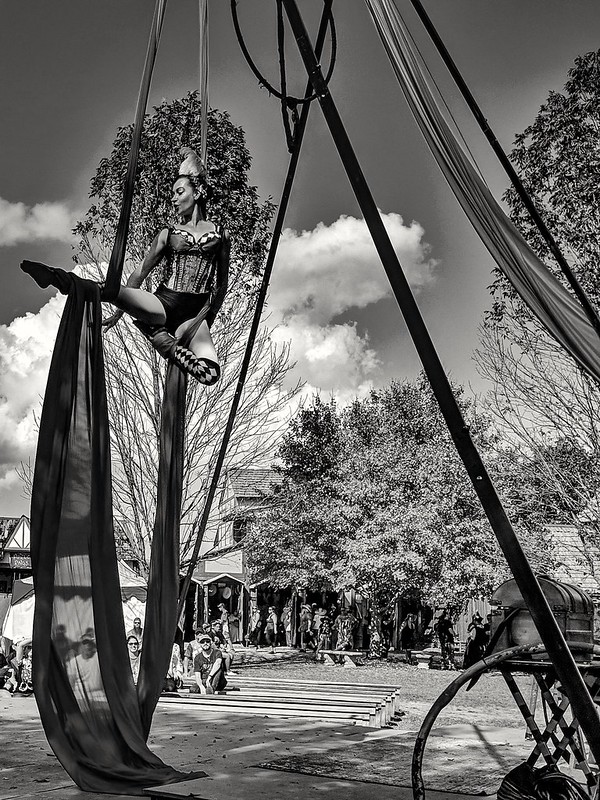 Yes, the world is a flaming dumpster, but forget that for a tenth of a second and enjoy this picture of a talented acrobat performing on silks at a renaissance festival. It’s nice to appreciate someone who is good at their work, and sharing that work with a crowd.

What thing(s) did you take a moment to appreciate in the last week? Tell folks in the comments; I think it would probably be helpful to everyone.

(And if you haven’t taken a moment to appreciate something in the last week — today is a fine day to do so.)