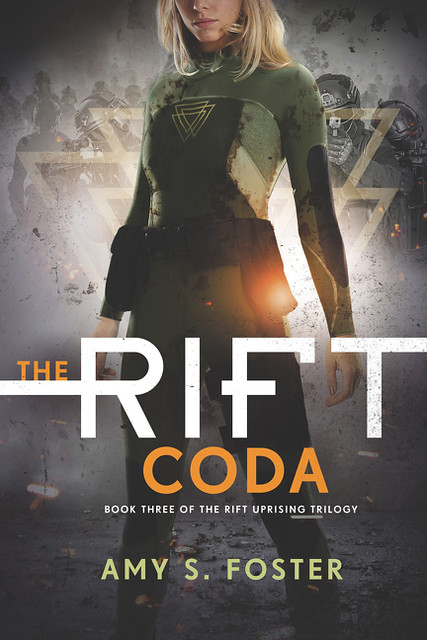 Why do writers write books? One reason is to figure out who our characters are, and who they need to become to be fully realized. Amy S. Foster explains the journey one of her characters makes, across a trilogy of books that ends with The Rift Coda.

Almost three years ago I wrote a post about the Big Idea I had for the first book in my series. My Big Idea was to create characters who sounded and acted like actual teenagers even though they were Super Soldiers guarding a doorway to the multiverse. It was a Big Idea, but it was not the Big Idea that would end up dominating the landscape of these novels.

I couldn’t have known when I created Ryn- a female, a girl warrior that I would run up against so much institutionalized sexism that in the beginning, I wasn’t even aware it was happening. But it did and it still is.

It was little things at first. ‘Why does Ryn care about boys?’ ‘Good story, but is she doing all of this to have sex?’ ‘Ryn is far too preoccupied with her love life. She’s a soldier.’ I was confused. Did I put too much romance in my novels? I mean sure, Ryn likes a boy but, that boy was always written as a device. He was an outsider. The voice of reason. He came into the situation and said ‘uhhh Great Big Super Important scientific discovery and teenagers are policing it? Really?’

The story started out with Ryn figuring out who was in control and why the people in charge were not only making teenagers into deadly killing machines but also interning immigrants from other Earths inside a village that while nice enough, was still a prison.

Soon enough I realized that Ryn’s journey was about much more than teens recognizing themselves in Ryn’s dialogue. I wanted teenage girls to recognize themselves in Ryn, period. But they weren’t and why would they?

Society tells us that women must choose between love and power. Girls aren’t supposed to be gun toting, hand to hand combat bosses, tactical genius’ AND be into boys (or other girls). Or their hair. Or clothes or make up or their feelings. How would a girl pick up the Rift Trilogy and be able to project herself into the role of Ryn if she has never seen a girl in real life be a fully realized female warrior? I’m not being extra about my feminism here. It was only this year, this month, that the first female candidates were able to be up for selection as a Navy Seal. And it’s not like the response has been positive. People are pissed. Pundits are complaining about standards slipping.

As I began to craft the final installment of the trilogy, the real Big Idea came to me. I need to help the world redefine what the female warrior archetype is. No, she is not a guy with boobs. She is a woman and she can lean into those singular attributes to make her a better warrior. Empathy, active listening, communication, admitting vulnerability- these skill sets will guarantee she is a superior soldier. They will also help establish that she is not a monster (I’m looking at you Joss Whedon/Black Widow) and therefore doesn’t have to be Asexual (Wonder Woman, you are hot, but I think we could have all used a little more time in that room with Chris Pine). Speaking of that- why is Diana the only child of the Amazons? Oh right, they are warriors- they can’t be mothers too (except why not though? Themyscara seems a fairly idyllic spot for raising a kid and they are incredibly maternal).

You see were I’m going with this. We don’t have a vast cadre of female warriors to choose from but the ones we do have are either virginal or non committal. They can have sex but not think about having a family. They can be creators but not destroyers. And so I had to make sure that Ryn embraced these parts of herself that she had been told by society made her weak. She had to learn to lead not from a hierarchal vantage, but from a more feminine non-linear one. She had to be okay with saying, what should I do here? And not worry about being perceived as incapable. Finally, she had to come to terms with the fact that she had feelings and those feelings weren’t getting in the way of her job and that in fact, they would make her better at it.

The more I speak about this at comic cons and write about it and do interviews, the more traction I get. I can see the change happening. Last week I got an email from a young girl who said she loved the book and was thinking about enlisting. She had never considered being a soldier before because she thought she was too emotional. She wrote that Ryn helped her understand that her empathy could actually do some good in the world.

If that’s not a Big Idea, I don’t know what is.