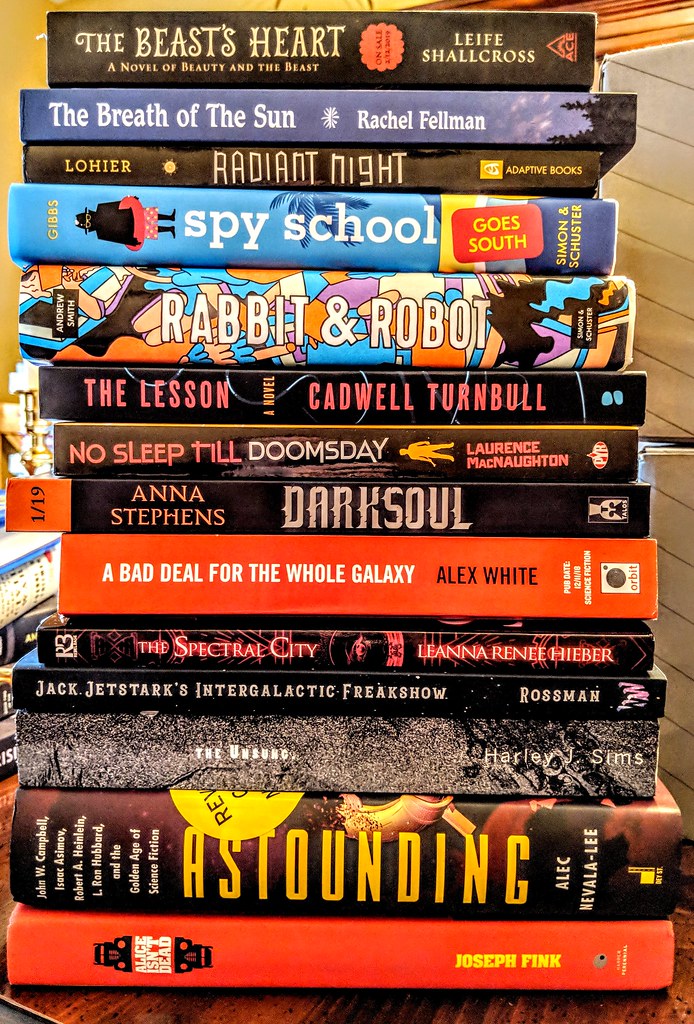 As we head into an increasingly autumn-like weekend here at the Scalzi Compound, here’s a slightly-larger-than-usual stack of new books and ARCs for you to peruse and contemplate. And if there’s anything here that rings your bell, tell us about it in the comments! 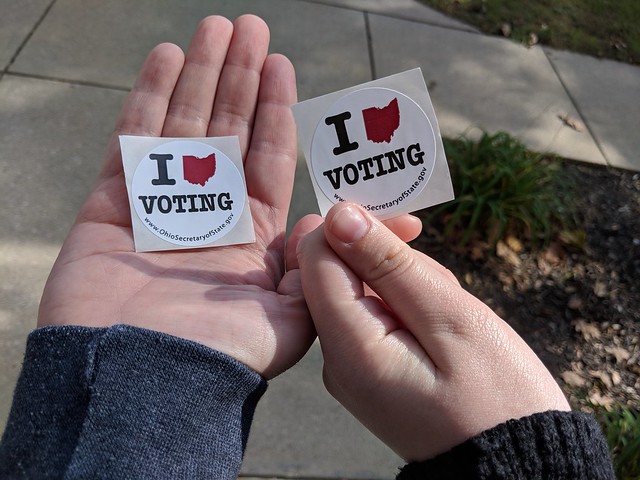 It pleases me immensely that today I took Athena to the local board of elections office so that she could vote in her very first election ever. She was a couple of months too young to vote in 2016, so this was the first time she could do it. We both voted early because on election day, we’ll both be somewhere else: Athena will be at school, and I’ll be in France. Better to take care of it now and have it done than miss it, especially this election year.

I’m super proud of my daughter that she registered to vote and cast her ballot. Any one who follows elections will tell you that young people vote the least of any age demographic, a fact which I find weird, since they are the ones who will have to live the longest with the results of each election. I voted the very first time it was possible to do so (1988), and so it makes me happy that Athena has now done the same. It’s a tradition worth keeping up. Please encourage the young people you know and love to vote as well. It matters.

A decade ago this very week (on 10/10/08, in fact), Whatever moved from being self-hosted to being hosted on WordPress, and on its very fine VIP service. Lots of things have happened in the world and in my personal life since that switchover, but you know what hasn’t happened? Whatever being down or inaccessible for any real period of time. For a decade, and including some of the heaviest traffic days this site ever had, I’ve never had to worry if the site was going to go down, or be inaccessible, or be vulnerable to the short of BS attacks many sites fell prey to. After a couple of years of my site struggling with heavy traffic days, it was truly gratifying for the site to have a home that was, and has been, built to last.

This is why every year I remind people — without prompting from WordPress! This is all me! — that WordPress is a truly excellent hosting solution for blogs, and when you pair it with WordPress’ best-in-class blogging software (which has also been a delight this last decade), it’s a pretty powerful combination. I’ve been using the VIP hosting for all this time, but WordPress has several levels of service that are designed to fit your needs and budget, all of which, in my experience, are rock solid. I have never had cause to regret bringing Whatever over to WordPress. After a decade, that’s saying a lot.

So: WordPress! It’s great! I enthusiastically endorse it for all your Web site and blogging needs.

And to the folks at WordPress who might be reading this: Thanks for being awesome for this whole decade, and for giving Whatever a very fine home. You’re the best. Let’s keep at it. 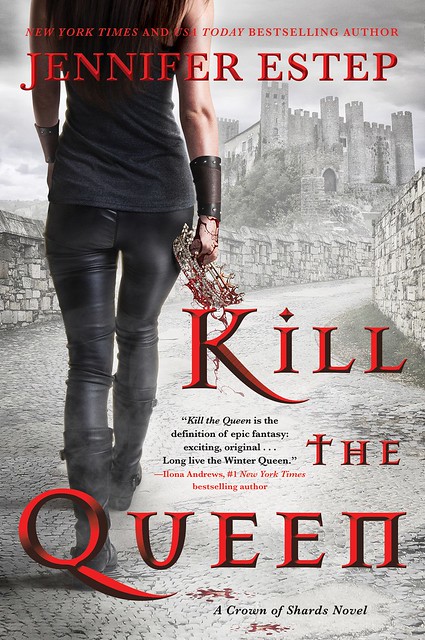 Football, cooking smells and names — how do they all come together to be inspirations for an epic fantasy novel? Jennifer Estep knows how, and today she’s here to tell you how they combined for Kill the Queen.

I tried to write epic fantasy for years—years!

In fact, the very first (unpublished) book I ever wrote way back in college was an epic fantasy. But even though I wrote a couple of them when I was first starting out, the genre just never quite clicked for me. So I moved on and started focusing on urban fantasy, along with young adult fantasy. But in the back of my mind, I promised myself that I would try my hand at adult epic fantasy again someday. As much as I loved reading works by David Eddings, Terry Brooks, and J.R.R. Tolkien, I wanted to write my own books and tell the stories that I wanted to tell.

Now, thirty-some odd books later, my first published epic fantasy, Kill the Queen, is out. I’ve been pitching the book as Gladiator meets Game of Thrones with a kick-butt heroine. It’s a good description, but it’s not the “big” idea behind my book.

Truth be told, I don’t think there was just one “big” idea that inspired my book. No, to me, Kill the Queen is several “little”, disparate ideas that morphed into one story.

The first “little” idea that helped inspire the book was football. I love football, especially the NFL games. I participate in a couple of fantasy leagues, and my friends and I used to get together on Sunday afternoons to watch football and hold MeatFest—a cookout that featured inordinate amounts of meat, especially bacon.

About two years ago, I was watching a football game and listening to the announcers’ hyperbole about how the players were “weekend warriors” and “gladiators of the gridiron”. I had been thinking about trying to write an epic fantasy again, and I was searching for an idea. For some reason, the word “gladiators” resonated with me, and several “what-if” questions popped into my mind. What if I created a fantasy world where people cheered on gladiators/troupes the way they do football players/teams in our world? What if my heroine was forced to become a gladiator in order to survive? What if her gladiator training helped save her kingdom?

With those “what-if” questions swirling around in my mind, I came upon a second “little” idea—my family. My grandfather had several brothers and sisters, and as a result, I have dozens of cousins. Some of my favorite childhood memories are of our summer family reunions when we would all get together to eat, play games, and just hang out and catch up. What if my heroine, Evie, was part of a royal family and all her cousins were slaughtered during a massacre/coup? That would be a great way to start my book, as well as provide a lot of motivation for Evie to get revenge on the people responsible for the massacre.

One of the things I have a love/hate relationship with in epic fantasy is that you, as the writer, have to name every single thing in the book. The magic users, castles, kingdoms, rivers, cities, plants, animals. They all need names. After many false starts and stops, I finally decided to use Roman mythology (along with Norse mythology) as the basis for some of my names.

Why was this my third “little” idea? Well, I’ve always loved mythology, and I like to use names with meanings that tie in to my characters’ personalities, surroundings, and more. For example, in Kill the Queen, Bellona, my main gladiator kingdom, is named after a Roman war goddess. Plus, since I was writing about gladiators, using Roman mythology seemed like a good way to add another layer of subtle depth to my overall world building.

Sometimes, my “little” ideas are things that percolate in the back of my mind for a long, long time. Several years ago, I read an article talking about how the sense of smell is the least used sensory descriptor in books. As writers, we almost always describe what our characters see and hear, but we don’t necessarily talk about what they smell all that often. Oh, I thought when I read the article, it would be a fun writing challenge to include more smells in a book someday. Well, that someday finally arrived.

One of the first things I do when I start writing is think about my heroine’s magic/powers. For Kill the Queen, I wanted Evie to have a couple of different powers, including one that most people would think was a weak, useless ability, so I decided to give her an enhanced sense of smell. Most people scoff at Evie’s ability, but she can actually smell people’s emotions, which comes in handy. Plus, having a character with an enhanced sense of smell was something I haven’t done before, and it also played to one of my strengths as a writer. (More on that below.)

The fifth—and perhaps most important—“little” idea that helped shape Kill the Queen was my own writing strengths. Over the years, as I’ve written various books and stories, I’ve identified some of the things that I enjoy writing—action/fight scenes, strong heroines, and food talk. Whenever I’m contemplating writing something new, I often think about what characters, settings, and plots will really let me bring out my writing strengths. That’s what I did for Kill the Queen, and I think this is one of the things that finally helped me get over the hurdle of writing epic fantasy. Penning a gladiator-themed book let me incorporate several action/fight scenes, and Evie becomes both physically and mentally stronger as she progresses through her training. Plus, Evie works in the gladiators’ kitchen, and people’s emotions often smell like food to her—garlic guilt, cinnamon curiosity, and more.

A book doesn’t necessarily have to be one “big” idea. Sometimes, one or two or five (or more!) “little” ideas can all come together to create one story.

Happy writing and reading, everyone!