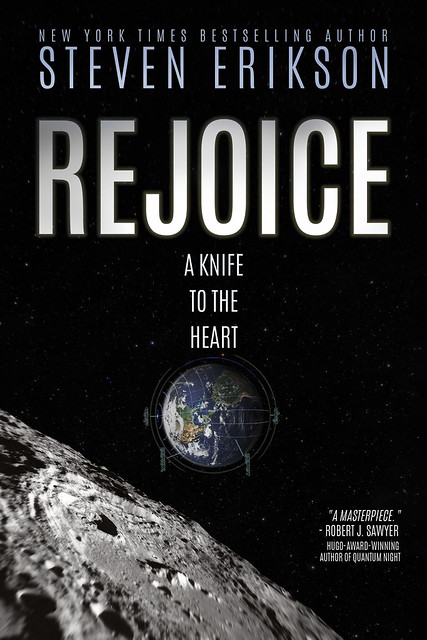 Call Steven Erikson a radical, a rebel or just someone who watches too much TV, but the fact is: Right now, a particular trope of fiction has him fed up. And he’s doing something about it, as he explains in this Big Idea for his latest, Rejoice, A Knife the Heart.

I have a confession. I watch a lot of television. When it’s not sports that I’m watching, it’s dramatic series, be they mainstream or Netflix or any of a number of available networks. And I go to films. A lot. Sometimes I wonder why I bother, since my disaffection grows. What’s bothering me about all these television shows, series, and all those films? In a lot of them (okay, in most of them), at some point, somewhere, a certain expression of power shows up. I’m not talking the superhero flicks here. I’m talking about something rather subtler, so commonplace we barely notice, even though it drives plot after plot.

It’s this: men with black sunglasses and wearing suits and driving black SUVs show up. They chase down the hero, truss them up and whisk them away. Or the hero escapes a few times, only to eventually confront whatever hidden hegemony is behind all the secrecy, and it’s the black-suits all getting gunned down in the white heat of righteous rage (because, really, who wouldn’t?).

Or: a SWAT team kicks in the door and basically does the same thing. Or maybe it’s a Special Forces squad. Or how about the classic combination: SWAT team and some guy in a lab coat wearing wire-rimmed glasses who’s always last to arrive.

The point is, time and again, some hidden authority barrels into the story, and we’re off and running. Now, for entertainment purposes, sure, it’s what we’re kind of used to these days: secret cabals of government/corporation/whatever are out there messing with the lives of innocent people, and the plot often boils down to an almost Western motif: the lone individual against corrupted nodes of concentrated, above-the-law power, be that a monomaniacal rancher, robber-baron, or the Illuminati.

Well, all of that leads me to a second confession: I am having a growing problem with authority. I am not so naïve as to not understand the notion of secrecy (or even privacy if one wants to swallow the illusion that corporations are people, at least legally, and that successful competition demands the hiding away of knowledge); and I get that nations play the same game. But, you see, film and television are showing us a world, and in that world anyone who has a secret will by default erect enormous organizations devoted to keeping that secret, and that organization must, of course, not only be heavily armed, but also justified in killing to defend that secret. Until the hero arrives to tear it all down.

When I watch the eponymous scene – that SWAT team charging in, faceless and guns bristling, to tie up and whisk our hero away – a small but steely voice in my head speaks to those anonymous soldiers: “What gives you the right to do this? See how you revel in your power to terrorize someone, hiding your humanity there behind your face-shield. See how readily you take orders, even when those orders can destroy the lives of your country’s own citizens. How eager must be your salutes to that great cold-eyed spider at the heart of the web, that the sovereignty of a single person should mean so little…”

Yeah, I know: Steve, take a breath. It’s only a silly show, after all. And we watch with nary a blink of the eye. This is the modern world, after all, one where abuse of power is so common we barely take notice of it. It’s just how it is, and Hollywood is simply reflecting that reality. Yeah, I get it.

I’d been meaning to write a First Contact novel for well over a decade. I’d made researching such a novel into a hobby. I had an inkling that I didn’t want to create a novel that sat easily within the sub-genre. I wanted to dismantle a few tropes, the first one being how so many First Contact stories involve, a priori, an Earth-based authority as humanity’s first point of contact: a secret Majestik-style cabal deep inside the government, the ubiquitous Men In Black; or an astronaut settled deep into the quasi-military realm of NASA; or a scientist (collected up by men in black suits wearing black sunglasses and driving big black SUVs) acting at the behest of the People in Power, and more crucially, that ET’s willing to play along.

Instead, and I think this qualifies as a Big Idea when it comes to First Contact SF, I wanted an ET arriving that then set about doing what it does, while utterly and completely ignoring the usual list of suspects (presidents, men-in-black, scientists, the military); and to then not only ignore them, but bring them down. An end to secrecy. An end to hidden power-blocks and all the vicious games they play to stay in power. Wake up, world, to a brand-new day.

Sometimes an idea for a novel only comes alive when two entirely disparate elements suddenly come together. That synergy is the fuel every writer looks for. It launches the rocket, does all the heavy lifting, and before you know it, you’re floating in orbit, looking down on the whole shebang.

Rejoice, A Knife to the Heart is my thought-experiment, my ‘what if’ followed by ‘then what?’ Sometimes, the only way to kick back is through art. Anything else and suddenly the black SUV’s pull up outside your house and, well, you know the rest…