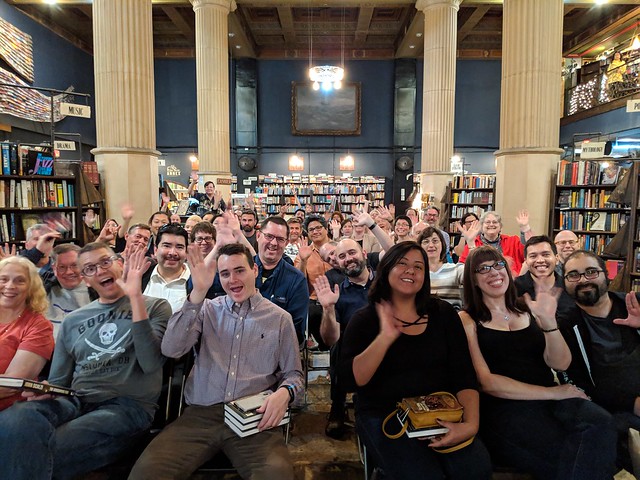 The tour is a little bit past the halfway point (my last event in the US is Sunday), and here are some quick thoughts on how it’s going so far:

1. So far, so good! There’s been a nice turnout at each stop, and people seem to be enjoying the set-up of rolling a die to find out what I’ll be doing that evening. I do a few variations of this; for example, last night in Chicago, because I was at the American Writers Museum, I talked writing process (and then rolled for the other things), while in Fort Collins, because the event was at a church, I actually did a sermon, complete with Bible reading, because, come on, how could you not? But the goal of making it different and fun each night is working, it seems.

2. The book also appears to be doing well — reviews are positive and the sales are very good. We’ll see if it shows up on bestseller lists, although so much of that depends on factors entirely out of my or anyone else’s control, and doesn’t necessarily track with total sales. The Collapsing Empire sold the most units in the first week of any book I’ve put out (so far) and it didn’t hit the NYT hardcover list, sooooo who can say? It does look like Fire is doing at least as well as Empire, however. Can’t complain about that.

3. I wish I hadn’t’ve booked so many early morning flights (today I was up at 5; when I went to LA, I had a 2:40am car pickup, which was kind of hellish), but seeing fans and friends has been worth getting up early for (although I usually call it a night early). And I’m pretty sure today is the last early flight! It’s sleeping in from here on out.

4. I’m doing more walking this tour — a couple of stops where the event was a mile or so from my hotel, I elected to walk over rather than take a car. Between that and the usual airport walking (especially at big airports), I’m actually getting exercise. I kind of need it, I have to say.

5. After Sunday, I get to go home for one whole day, and then I’m off to France. Wheee!

In all, everything is groovy so far. Chapel Hill, Raleigh, Athens, Charleston and Austin, I’ll be seeing you soon.

17 thoughts on “The Collapsing Tour: One Week In”