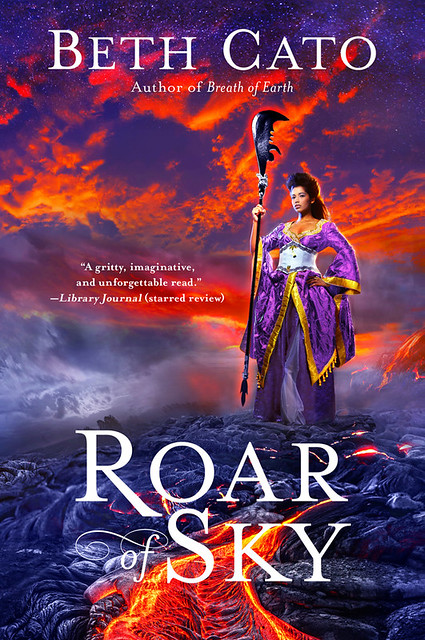 Magic is powerful and can change the world — but in Beth Cato’s new novel Roar of Sky, magic also has consequences, especially for those who wield it.

In my books, I write about women who are strong in realistic ways. In my first series, The Clockwork Dagger, Octavia Leander is a medician who is defined by her compassion and her courage to make a stand, whether in a battlefield surgical tent or against drunken punks pummeling gremlins for their amusement. I wrote her the way I did because I was sick and tired of waiting for someone else to write books about my favorite role-playing game archetypes–white wizards and clerics–as the main heroes, not as convenient doctors there to keep the big burly warriors alive.

I had a different idea in mind as I started Breath of Earth, the first book in my Blood of Earth trilogy. Ingrid Carmichael is a smart and savvy woman of color in an alternate history version of 1906. America and Japan are allied as the Unified Pacific and in the process of dominating mainland Asia. The economy and technology of her world is driven by geomancy: energy harvested from the earth and stored in crystals called kermanite. This harvesting is perilous business. Geomancers take in the power of an earthquake and hold it as a fever. This means that in a big earthquake, the lash of power could kill a geomancer almost instantly if they don’t break direct contact with the ground or channel the energy into kermanite.

When I describe the plot of Breath of Earth at conventions, I like to say, “Spoiler alert! There’s a big earthquake.” There’s no hiding that the climax of the novel is the 1906 San Francisco Earthquake and Fire, but in this version of history, it happens for very different reasons.

Did I mention that Ingrid happens to be a geomancer? A really, really, powerful geomancer? Something women aren’t supposed to be–and certainly not women who look like her.

The second book, Call of Fire, takes the action up to the Pacific Northwest. To save herself and countless others, she must risk holding a whole lot of geomantic energy.

Some people insist that fantasy writers have it easy because magic provides an easy solution to problems. Not in my books. Magic carries consequences and Ingrid is a human woman channeling demigod-level powers. Her body is irreparably damaged. As I already established in my other series, I don’t believe Ingrid should be conveniently healed and sent on her way.

The cover of my trilogy’s finale, Roar of Sky, shows Ingrid standing amid the lava fields of Kilauea on Hawaii’s Big Island. She holds a guandao, a halberd-type weapon, but not to wield it in battle. She now relies on various aids to help her walk, climb stairs, and perform other basic functions. The events of the previous two books have left her in constant, nearly debilitating pain.

Even though I write a lot about magic, I see my books as fundamentally realistic. The women I know embody a quiet kind of strength that isn’t readily depicted in genre novels. They deal with pain on a daily basis, but they endure. They have trouble walking. It takes them several tries to get up from a chair. They cope with migraines that stab their eyes like ice picks, yet they get kids ready for school, drive, and do what needs to be done with one eye open. They endure. The women I know wouldn’t work well for some motivational feature on the nightly news; their lives are too normal, too boring. But you know what? They endure.

Ingrid is a gifted geomancer, but what enables her to stay alive isn’t her godlike power. It’s her endurance, her willingness to adapt, to find a way to stand up even through sheer agony. That’s what makes her a strong character, like so many of the real women I know.

← The Consuming Fire: A New York Times and USA Today and Audible Bestseller!
View From a Hotel Window 10/25/18: Athens →