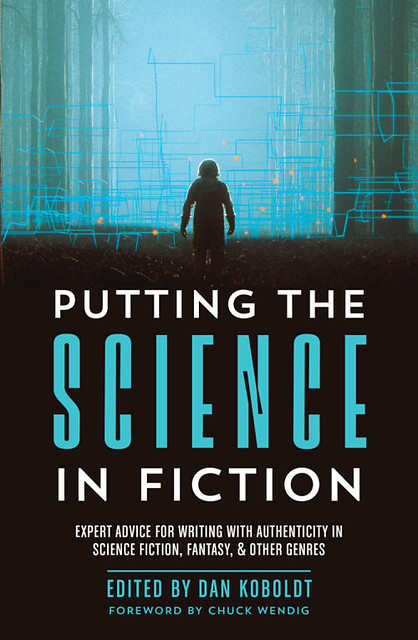 Science Fiction writers love science, but we don’t always get the science we already know 100% correct. Fortunately, Dan Koboldt is on the case, with his book Putting the Science in Fiction.

A few years ago, I wrote an article for Apex Magazine called “Eye-based Paternity Testing and Other Human Genetics Myths,” mostly because I was irritated at how frequently I encountered misconceptions about genetic inheritance in books, television, movies, and other media. I’ve worked as a genetics researcher for fifteen years, and it surprises me at how often people get this stuff wrong.

One frequent myth is the idea that physical traits like (like eye color) are inherited in classic Mendelian (i.e. dominant and recessive) fashion and can predict family relationships. The rock song “All I Wanna Do” by Heart is a great example. A woman has a one-night stand with a young man who apparently is hitchhiking. Years later, they run into each other and she’s got a child. “You can imagine his surprise,” the song goes, “when he saw his own eyes.”

It’s a great song but also not very realistic. Having similar eyes doesn’t make two people related. While it’s true that blood relatives often resemble one another, most physical traits that we think of as “genetic” are influenced by multiple genes and environmental factors. Eye color is a spectrum, and appears to be influenced by at least 15 different genes. It doesn’t always follow predictable inheritance patterns, either. People with blue eyes can have brown-eyed children and vice-versa.

In other words, eye color, like most physical traits, is not a good paternity test.

Another common myth is the idea of a “advantageous” mutation that changes an ordinary person into a superhero. It’s true that exposure things like radiation, carcinogens, and some classes of viruses can cause genetic mutations. However, a mutation occurs in the DNA of a single cell. Our bodies have millions of cells by the time we’re adults. Most mutations have no effect. Some may be deleterious, causing the cell to die. Even fewer mutations confer some kind of advantage to the cell, allowing it to grow and divide. If this happens, you don’t become a superhero; you’ve got cancer. Sorry, Spiderman.

After I wrote the article, I thought it might be fun to have an ongoing blog series to educate authors about scientific and technical aspects of science fiction. The problem was that many of the relevant topics were outside my area of expertise. We may not like to admit it, but scientists don’t know everything. We tend to specialize in a given field, and outside of it we may not have any more knowledge than the average person.

I wanted my blog articles to be written by true experts. After all, someone who works in a relevant field on a day-to-day basis can provide depth and nuance that you won’t find on Wikipedia. Also, their information tends to be more up-to-date, because not all of us get around to writing books or updating the relevant wiki page.

So I started to collect experts in other subject areas. The SFF community, as it turns out, is full of them. Most writers have day jobs, after all, and a lot of them work in science, engineering, medicine, and other technical fields. This was the genesis of my Science in Sci-fi, Fact in Fantasy blog series. Each week, I invite an expert to discuss their real world expertise as it applies to science fiction. Most of the contributors are SFF fans themselves, so they offer some lovely examples of works that get things wrong (or right).

Fast forward a few years, and the blog series had collected something like 150 articles representing a wide range of disciplines. Eventually, someone smarter than me had the idea to collect this useful information into a book. I thought that Writer’s Digest books would be the ideal publisher for such a reference. Luckily, they agreed.

Putting the Science in Fiction includes 59 chapters from a wide range of technical experts who collectively have endured more than 200 years of graduate school. Two thirds of the book’s contributors identify as female, by the way, so we’ve kept the “mansplaining” to a minimum. There’s also a hilarious foreword by bestselling author Chuck Wendig.

Our goal is simple: to help writers add a dose of realism to their science fiction stories. Every chapter is short and to the point; we address common pitfalls and misconceptions, and then offer some tips for getting the details right. With a bit of expert guidance, anyone can write stories that are realistic and compelling (even to readers who know a lot about the underlying science). And that, my friends, is the big idea.