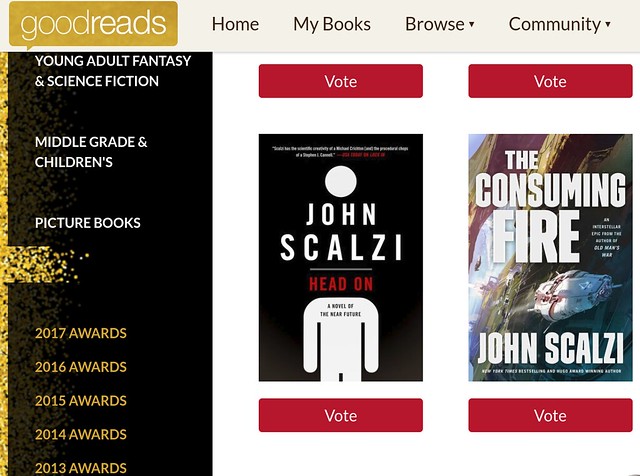 Well, this is somewhat unexpected: Head On was an opening round nominee for the 2018 Goodreads Choice Awards in the category of Science Fiction, but The Consuming Fire was not, mostly, I expect, because it just came out and hadn’t garnered enough reviews, etc to make it on the initial ballot. But people can write in favorites if they’re not on the first ballot, and lo and behold, on the semi-final ballot, both Head On and The Consuming Fire are present.

1. To the people who voted for Head On: Thank you!

2. To the people who wrote in The Consuming Fire: Thank you!

3. And now I expect them to split the vote and neither to make it to the final ballot. But that’s all right, getting two works on the semi-final ballot is a pretty neat trick and I’ll take it. So, again, thank you.

If you would like to vote for either of these novels, or some other nominated science fiction novel (because there are many fine choices and you should vote for what you love the most), here’s a link to the 2018 Science Fiction Goodreads Choice Awards Semi-Finalist ballot. You may also, of course, vote in the many other categories as well.

Which will I vote for? Well, I feel this would be trying to choose between my two children, as it were, so I will abstain from voting in this round. But don’t let my reticence stop you. Vote! Vote away!

(Oh, and, as I’m writing this on November 6, i.e., the actual election day in the US: If you’re a US Citizen, also vote in your national, state and local elections, please. It’s actually really important. Thank you!)