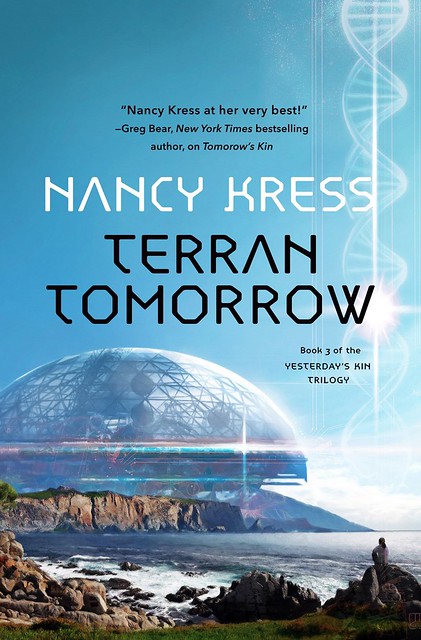 Wiping out a terrible disease that kills millions each year: An unmitigated good, yes? Well, hold on there — Nancy Kress is here to explain how there are consequences to every action, and what those consequences mean for you, and her new novel, Terran Tomorrow.

Why should you care about gene drives?

Right now, I can see you thinking: I don’t! Next! But give me five minutes to explain why you should.

First, the five-second-or-so version (depending on how fast you read): Genes drive can, and soon will try to, eliminate an entire species.  Sparrows, wolves, mosquitos, and you are all species.

The five-minute version: A gene drive is an artificial “selfish gene” capable of forcing itself into 99% of an animal’s offspring, instead of the usual 50%. Theoretically, they could affect promoter genes, which are in charge of turning other genes on and off. In actuality so far, we know that they can affect reproduction by turning all males or females (pick one) of a species sterile. We know this because London researchers, supported in large part by the Gates Foundation, have succeeded in creating this gene drive in females of the malaria-carrying mosquito Anopheles gambiae sterile. At the same time, as part of the international effort Target Malaria, a small field trial with sterile male Anopheles will begin in Burkina Faso by the end of 2018. If all goes well, Anopheles may eventually be eliminated, and with it malaria.

What if all does not go well?

What if it does?

What if the same technique is used to eliminate other species?

These are the places that hard science fiction looks for stories—the impact craters of major technological advances like gene drives. I write hard SF, and my new novel, Terran Tomorrow, is interested in the impacts, good and bad, of genetic engineering on the natural world. Since those impacts are made by people, Terran Tomorrow deals not only with how people mess around with genes but also, and more importantly, why.  For what good or bad reasons, under what circumstances, with what consequences. How do we clean up other people’s genetic messes? How do we clean up our own—and at what personal sacrifices? Science is much more about people than petri dishes.

Terran Tomorrow is the conclusion of my Tomorrow’s Kin trilogy, which began with the Nebula-winning novella “Yesterday’s Kin.”  In the first book, aliens came to Earth. In the second book, humans went to World. In this third book, humans and a few aliens return to Earth, and are startled and shocked by the changes since they left. Environmental changes, personal changes, a complete upending of the social order. Time dilation, if it brings a decade of genetic warfare, can do that.

Marianne Jenner, evolutionary biologist, is caught between the clashing philosophies of her now-grown grandsons, ecologist Colin Jenner and his brother, U.S. Army Colonel Jason Jenner. Geneticist Zack McKay and his fractious scientific team are trying under impossible conditions to create a planet-saving gene drive. Alien visitors are rebelling. So are ex-wives. A civil war rages. And sparrows are now deadly.

Sparrows? Yes, because, as I mentioned in the five-minute version of why gene drives matter, they can theoretically affect other genes besides those regulating the reproductive system. There are also promoter genes affecting various metabolic pathways in organs such as the brain.

In real life, scientists are exploring links between microglia, a form of brain cells, and both schizophrenia and Alzheimer’s, in which microglia don’t seem to be functioning optimally. Could a gene drive change that? Or cause it? What else in the brain can be permanently changed with a gene drive?

There are no easy answers to those questions, not in real life nor in fiction. That’s what makes the questions worth doing what SF does best: rehearsing one possible future. Because gene drives are already here.