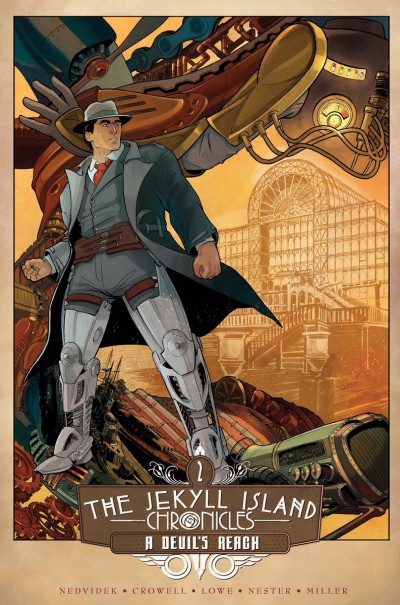 A love of family history and a desire not to wander the fairlanes in their spare time led Steve Nedvidek and his co-creators to make The Jekyll Island Chronicles, an alt-history graphic novel series. How did these motivations end up combined into a colorful artistic creation? Nedvidek explains it all.

I was a kid who grew up enthralled by heroes and the worlds they inhabited: aliens with super powers, talking apes on another planet, and musketeers in some place called Paris.  Heck, even Charlie had a chocolate factory. But one day, much later, I realized my biggest heroes were a part of my family. They were REAL people who did REAL things and made REAL differences to me.

My father was a Marine who fought in Korea, taught me to draw, and worked in a factory his whole life. My grandfather was an immigrant from Bohemia who joined the US Cavalry to gain his citizenship, raised three sons, and could handle a bullwhip. So cool…

I began to wonder. “What were their worlds like?” Especially Grandpa. With little or no information kept by the family, my imagination kicked in and I began to dig into a time of our history that I had learned very little about—the early 1900’s. I found this world interesting and fresh and, really for the most part, unknown to me: the Great War, the League of Nations, Henry Ford, tech that was changing the world, and people who parented the kids that would become “the greatest generation.”

A convergence occurred that I noodled on for subsequent years: Why were none of the heroes I grew up with in THIS time frame? Why were superheroes only after WWII and why were they either aliens or somehow mutated? Wouldn’t it be awesome if veterans like my grandfather had access to the coolest gadgets of the time? What if Tesla and Carnegie designed superhero costumes? What would THOSE heroes be like?

In my adult years, with a family, mortgage, and full-time job, I found two friends in the same situation. Like me, my long-time friends Ed Crowell and Jack Lowe had familial connections to WWI, had read Tolkien and Bradbury and Wells and Stan Lee as kids, and wanted to tell a compelling story.

None of us played golf very well, especially me. So, we set off to do the next best thing.

Working on our short game would’ve actually been easier. Writing something that was basically an elevator speech—action heroes battling anarchists right after World War I—wasn’t easy. Especially when we had done NOTHING like this before. And while we did have great vigor and energy in our inexperience, we also had some pretty great assists.

First, we had Jekyll Island: THE Jekyll Island with its iconic Jekyll Island Club. The place where the Federal Reserve was created. The Golden Isles were winter home of Pulitzer. And Rockefeller. And Morgan. And Carnegie. 1/6 of the world’s wealth called Jekyll home. These Golden Isles are magical. They are REAL. The homes of many of these industrialists are still intact for visitors to see. Jekyll was the natural locale for our story to take place.

We also had SCAD—the Savannah College of Art and Design. That was one of our other “big ideas.” We sponsored a class in Savannah for high level sequential arts students to help us visualize our heroic characters, the cabal of evil anarchists, and the machines that would dominate our alt history/diesel punk world. The students of SCAD were charged with creating a pitch packet for us, that would help us persuade publishers and production companies to take a look at the story we were trying to tell.

We had a successful Kickstarter campaign that gave us financing. Here’s a fact: a graphic novel is insanely expensive to produce. Every word on the page must be laid out, drawn, inked, colored, and all sound effects and copy bubbles must be added. I had been a cartoonist most of my life, but I cannot do THAT.  It was going to cost us.

We had history. A typical writer’s meeting in my basement had each of us with our computer open, scouring and verifying weird and little known facts of the Gilded Age. “Hey, look at this!”, “Did you guys know…?”, and “Oh man, this is amazing!” were often heard. In a way, stringing together these factoids (like the explosion of a blimp over Chicago or the mail bomb campaign of 1919) created a narrative that in many ways wrote itself. This is the blessing of history and the extra blessing of alt history.

And, this sounds corny, but we had each other. There are three of us on this team. Having three co-creators makes it easier to handle the load of writing duties, setting up social media (newsflash: men in their 50’s aren’t good at this), talking to newspapers, paying bills, getting cosplay costumes ready for Comic Con, and doing whatever was required to finish Book One. To be sure, there were times of tension, arm wrestling, and frustration with each other. But, in the end we know that this thing does NOT GET DONE if we don’t cooperate. So, we do.

Plus, we are still having fun! Book Two is done and is released this week, just in time for the 100th anniversary of the end of the Great War. Our publisher is making a donation to the WWI Centennial Commission for each book in the series sold in November and December. This will go to help complete the memorial in Washington, DC to those that fought in the Great War—it’s the only modern war still without a memorial in our Capital.

Book Three is started and should be out in mid-2020.

And although our golf games still stink, we have our world:  weird facts, exotic locations, supercharged machines, historical characters, a dollop of fantasy, and super cool heroes–all of whom are vets of the first World War.

I think Grandpa would be proud.

Read an excerpt. Visit the author’s site. Visit him on twitter.