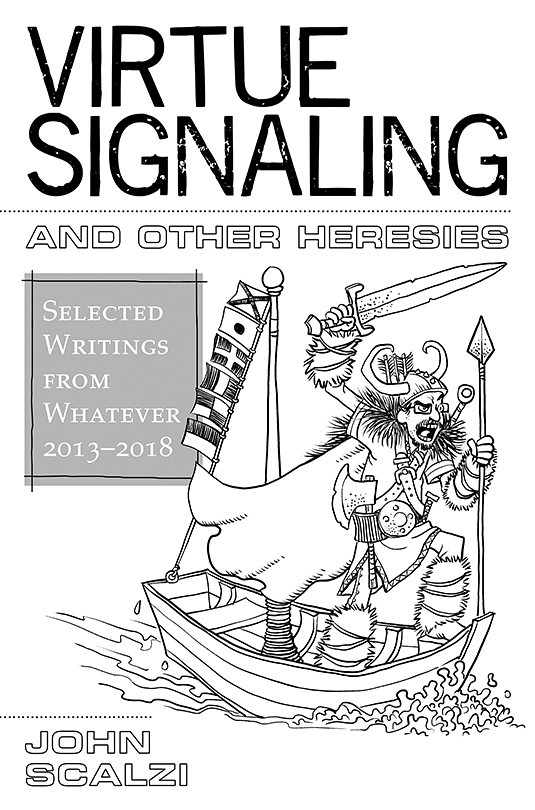 For various reasons, the signed limited hardcover edition of Virtue Signaling and Other Heresies: Selected Writings From Whatever 2013 – 2018 arrived early at the Subterranean Press warehouse. And when it arrived, we thought: Why make people wait until December?

So: If you’ve pre-ordered the book, it’s now shipping to you. Thank you! If you wanted to get the signed limited hardcover edition but haven’t ordered it yet, if you order it now through Subterranean Press, it’ll ship when the order is cleared.

Also, if you do want the signed, limited hardcover edition, you should order it soon — there are only 1,000 copies of it (that’s why it’s a limited edition), and when it’s gone, it’s gone. There will also be an ebook edition, so you can still get the collection when the limited hardcover sells out.

Incidentally, Virtue Signaling was reviewed by Booklist, and they said nice things about it: “The quick, conversational essays are delivered with humor, honesty, and humility and are just like Scalzi himself, ‘all over the place and a bit pixilated.'” I’ll take that!

← I’ve Been Busy the Last Couple of Days With Projects I Can’t Tell You About Yet, So, Here, Enjoy This Cat Picture
I Meant to Write Something Today But Got Distracted By Cats, So Here’s a Photo of Krissy →

14 Comments on “Virtue Signaling and Other Heresies — Hardcover Available Early!”