An Interesting Fact About The Consuming Fire 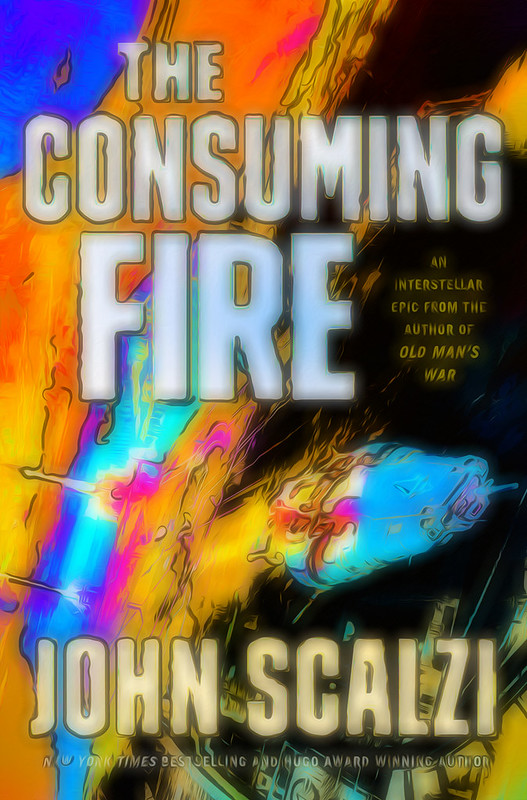 Last night on Twitter someone recounted a convention panel he’d been to, where the panelists were (jokingly) annoyed with my writing speed and publishing frequency. To which I replied, “It’s a good thing they don’t know I wrote The Consuming Fire in two weeks. That would not help things.”

To which I got more or less the following response from other writers on Twitter and in email (and I paraphrase, here): “YOU FUCKING DID NOT.”

Readers: I most sincerely fucking did.

Specifically, nearly all of The Consuming Fire was written between June 4 and June 18 of this year, the latter date being when I turned the book in, at 7:30 in the morning, having written through the course of the night. I then tried to sleep but was too tired to do so, so I went to watch cartoons and then turned them off ten minutes later, because they were too complicated to follow. Krissy tells me that by her estimation it took a full week for my brain to get back up to full speed, and that in the interim I mostly shuffled around the house with a blank look on my face. This feels accurate to me.

Why did I write the book in two weeks? For many reasons, but the simplest reason is that I had no choice. The book had a drop-dead turn-in date of June 18, and as of June 4, I hadn’t really started on it, for various reasons, some reasonable and some really not. If years in journalism taught me anything it’s that you don’t blow a deadline. So that meant I had to write the thing in two weeks.

How did I write the book in two weeks? I turned off the Internet, hid from social media, asked Krissy to occasionally slip food underneath the door, and then set a goal of 8,000 words a day. Some days I hit that goal, sometimes I didn’t, and on the final day I wrote something on the order of 12,000 words. I didn’t sleep much. I looked a fright.

More generally, I was able to write a novel in two weeks because a) my journalism training prepared me to write quite a lot of words, relatively cleanly, at speed (not to mention writing here on the blog), and b) I had at that point written 14 novels, so the muscle memory, as it were, of pacing and formatting kicked in.

Also, and this is actually important, when I say I wrote the book in two weeks, it’s rather more accurate to say I typed it in two weeks. I had been writing the book — figuring out who was doing what to whom and how and why and when — in my head for close to eighteen months at that point. When I sat down to put it into a document, the majority of the story and plot beats were figured out. There were a few surprises as I was writing; a few things happened I didn’t plan for but which turned out to be really useful, which I chalk up to my brain figuring things out on a subconscious level and surfacing them when I needed them. Well done, brain! Sorry I abused you during the writing process!

Even if I was mostly typing during those two weeks, the experience of doing such a thing is, bluntly, just a fucking horrible miserable thing which I did not like. I mean, it’s nice to know I can write a novel — and not just a novel! A good novel! That’s popular with critics and readers and has sold really well! — in just two weeks if I have to. It’s nice to know that the writing skill is there to write at speed, cleanly and coherently. But I also never ever want to have to do it again. Sure, it’s fun to be all casual about it now, and to toss off lines joking about it on Twitter like it was no big thing. But it hurt, physically and mentally, both during and directly after the writing. I’m almost 50. I can’t being doing this shit on the regular.

More to the point, not only do I never want to do it again because it’s terrible for me, but I don’t ever want to do it again because it’s not fair to the other people who work on my books. Everything about The Consuming Fire production got crunched because I turned the book in at literally the last minute. Everyone involved came through like a champ, and novel came out when it was supposed to, and looks and reads great. But I don’t want to have “crunch” be the usual mode. I don’t want to be the problem child.

This is (among other reasons) why I don’t have a book out from Tor next year. I’ll be writing a book for Tor next year (almost certainly the next book in the Interdependency series), but it’ll come out in 2020, so we can have a nice, sane production process and also, have nice sane production processes for every book that follows. I don’t regret having two books out in 2018 — they both did very well, critically and commercially — but building in a better process moving forward is going to be the best for everyone.

So, yes: I wrote The Consuming Fire in two weeks. I’m glad to have had the experience! I wish not to have it again, if it’s all the same to everyone else.

69 Comments on “An Interesting Fact About The Consuming Fire”