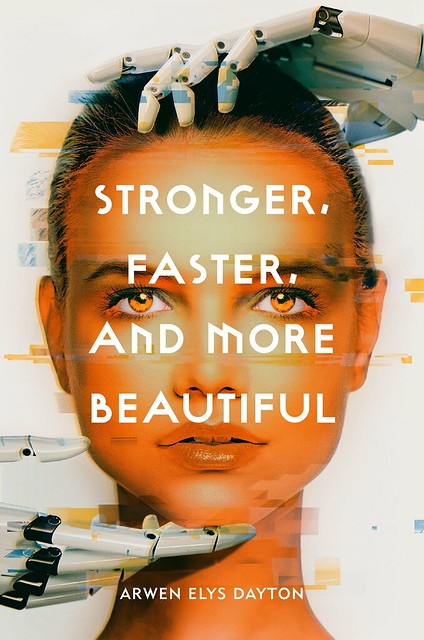 You want to give your children every advantage… but how far would you go to give them those advantages? It’s a question that Arwen Elys Dayton is intensely engaged with in her new book Stronger, Faster, and More Beautiful.

About a week ago, a researcher in Shenzhen, China, named He Jiankui claimed to have used CRISPR to edit the DNA of twin girls who were born in late 2018. When the girls were early-stage embryos in a petri dish, He made changes to their genetic code to eliminate a gene called CCR5 and so render them resistant to HIV and other diseases. He was, according to reports, at least partially successful. The work hasn’t been independently verified, but no one is questioning that it’s possible. Because it is entirely possible.

Since 2012, when an element of bacterial immune systems was isolated and its potential for altering any DNA became widely understood, researchers all over the world have been figuring out how to use this tool—called CRISPR, as you have probably guessed—to usher in a new age of genetic manipulation. From editing human immune cells so that they can fight or even prevent HIV and cancer, to removing inherited disease, to giving future generations traits that no humans have ever had (night vision? immunity to the flu?), we are on a frontier of artificial human evolution. Aside from CRISPR, there are numberless advances occurring in all aspects of medicine. At least four groups are working to grow human-compatible (or outright human) organs in livestock, researchers all over the world are pursuing competing techniques for fighting the “disease” of old age, and various labs are focused on editing not humans but the insects that infect us—like mosquitos—to wipe out diseases that have been scourges for thousands of years.

The future is unfolding in research universities and biotech companies, and yes, even in sketchy, possibly unsanitary home garages. We are already debating who gets to make the choices about what can and cannot be changed in our DNA. But while we debate, some researchers have started choosing. And editing.

My natural mindset is not dystopian but intensely hopeful, and the idea that we might soon be able to remove disease from humankind is . . .well, it’s like a realization of the most inspiring parts of the science-fiction stories I grew up with. And as a mother, I instinctively, innately, want my children to have every advantage. Resistance to cancer? Who would say no? Longer life? Of course I want that for them. Higher intelligence? A stickier question, to be sure, but if it were only a matter of a few tiny adjustments . . . ?

I want to believe that, given infinite options, I would have strong convictions about what was acceptable and what was too much. But would I? Would you? How do we—intellectually, morally, and viscerally—weigh such options? And here is the birthplace of Stronger, Faster, and More Beautiful—not the science itself, but the emotional life under the coming genetic paradigm.

When I was eleven years old, I watched a news story about a girl who was the same age as I was. She was refusing medical treatment for a fatal but curable disease because it went against the religious beliefs of her family. I have thought about that girl during all of these intervening years. How could she (or perhaps, some would say, only her parents) feel so strongly as to be willing to accept death rather than a proven alternative? And yet, as a fellow eleven-year-old, I also believed that she should have some say, some choice, in what was done to her, regardless of the consequences. The push and pull of my feelings about that girl, who probably died decades ago and whose name I can’t remember, were my touchstones in writing this novel. I wanted to paint myself into corners that felt just like that one. Or worse.

What happens if the design of a designer baby doesn’t go to plan? Where—and how—will he spend his life? (In Stronger, the answer is this: mostly underwater, away from other humans whom he does not understand, keeping busy by wrangling a flock of manatees that are growing human organs for transplant.) Other murky scenarios include a pair of semi-identical twins—both are dying, and the decision is made to harvest the healthy organ tissue from one to save the life of the other; forced modification of convicted felons to make them useful to society; the ability to keep a piece of a dead loved one alive . . . inside yourself. Unconscionable? Yes . . . for some.

On a meta level: What happens if countries cannot agree on biological ethics? Or on what makes (and keeps) humans human? When will this become a political issue? And what happens if religious groups make unwavering medical stands? Can we foresee a “Genetic Curtain” dividing the parts of the world where anything goes and the parts where humanity chooses not to change?

These intimate and grand puzzles were the big idea in Stronger, Faster, and More Beautiful. The science will happen—is happening!—no matter what we do (short of a planet-killing asteroid or plague or other apocalyptic option, of course). How we use the science to change ourselves, and who we become as a result . . . well, that’s the question. And it was delicious and terrifying to explore.

Read an excerpt. Visit the author’s site. Visit Get Underlined. Visit her on twitter.