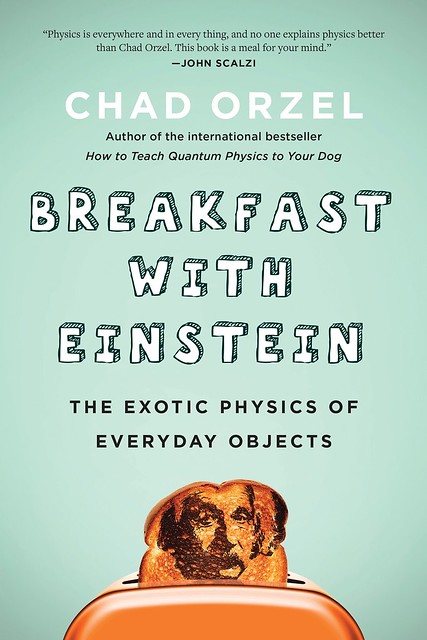 I liked Breakfast With Einstein so much I gave it a blurb, which you can see in the image above. But why did I like it? Because it explores the esoteric realm of quantum physics — here in the everyday world. Here’s the author, Chad Orzel, to dig deeper into it all.

(PS: The UK edition of this book made the Sunday Times list for Best Books of the Year, 2018. Not bad!)

Quantum mechanics is one of the most amazing theories in all of science, full of stuff that captures the imagination: zombie cats, divine dice-rolling, spooky actions over vast distances. Maybe the single most amazing thing about it, though, is that we think it’s weird.

That probably seems a strange thing to say, because quantum physics is so weird, but that’s exactly the point. These are the fundamental principles governing the behavior of everything in the universe, and yet they run completely counter to our intuition about how the world works. If these are the basic rules underlying everything, shouldn’t they make sense? How can the entire universe behave according to strictly quantum laws, and yet we’re not intuitively aware of it?

The answer is that quantum behaviors only become obvious when you’re looking at really small things: the behavior of electrons within atoms, say, or smallish groups of atoms moving slowly. As the things you’re looking at get bigger, their quantum-ness sort of blurs out, and we’re left with objects that, to an excellent approximation, behave according to the rules of Newtonian physics. The everyday, human-scale world, is just too big for us to see quantum physics in action.

At least, that’s what we think. If you know where to look, though, you can find hints of quantum physics absolutely everywhere, even in the most mundane of activities. The process of getting up in the morning and getting ready for work or school is absolutely full of phenomena and technologies with quantum roots.

Quantum physics got its start in an attempt to explain the red glow of a hot object like the heating element in the toaster you use to make breakfast — to explain that color, you need light to behave like a particle. Quantum physics determines the time on the alarm clock that wakes you up, through the cesium atomic clocks that we use to define the second — to make that connection, you need electrons to behave like waves. Quantum physics enables the sensors in the digital cameras your friends use to take cat photos, the semiconductor computer chips used to process them, and the lasers that carry them over fiber-optic telecommunications lines for you to stare blearily at as you sip your morning beverage of choice.

At the deepest level, the universe really does behave according to quantum mechanics, and while the huge size of the human-scale world mostly blurs out quantum phenomena, there are subtle hints left behind. That’s how we know about quantum physics, after all– from the work of scientists who spotted those little clues in the behavior of human-scale objects, and doggedly followed them to uncover the fundamental rules that we find so weird.

Breakfast with Einstein is a book about those clues, about how quantum phenomena manifest in everything that we do. It explains the quantum rules that govern everything, and how those rules applied to huge numbers of atoms combine to produce the world that we see. And it tells you where to look to see quantum physics in your daily routine. It probably won’t make you a morning person, but it might help make your mornings a little more amazing.