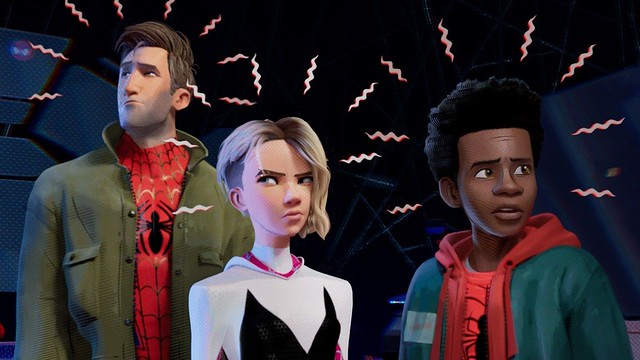 1. I was entertained by Spider-Man: Into the Spider-Verse all the way through, but about two-thirds in, this actual thought surfaced in my brain: Jesus, this film is entertaining. By which I mean that the part of my brain that stores the skills I used for years as a professional movie critic was so impressed by how well this film was put together it felt obliged to comment on it. I was compelled to admire the craftsmanship. I’m not going to say that this is a perfect film, but I can say without fear of contradiction that it’s difficult to see how they could have done a better version of this particular story. There’s very little here that feels out of place, or inessential, or rote and flabby. Given how far we are into the Superhero Era of film, and how ossified its traditions have become (“oh, look, it’s the third act boss battle”), this is a small miracle.

2. It’s also a film where its chosen medium — animation — is exactly right for it. I think there’s a still a bit of aesthetic snobbery around animation, ironically particularly when it comes to superhero films. It’s still assumed to be a compliment if you say something along the lines of “that was good enough to have been live action.” In point of fact, this particular film wouldn’t have been better served as live action; live action and all its aesthetic requirements and expectations would have made it worse. The abstracting remove from reality that animation provides fits the film’s multiverse story and allows it to be a “comic book film” in a way that most live-action superhero films can’t manage or look silly doing (see: Ang Lee’s Hulk). In live action, this film as it is would have come across as campy; in animation, it’s just doing its thing. This is of course more about our own expectations for live action and animation than it is about the mediums themselves. But you work with what you have.

3. Relatedly, it’s nice to see that the conduit between live action and animation can flow both ways. Disney recently has been making “live action” remakes of their animated features to considerable financial success, if not exactly cinematic triumph (ask me sometime to recount all the failures of the live action remake of Beauty and the Beast, and then settle in, we’ll be there for a while). Having one of the Marvel properties head the other direction, and rather more successfully as a creative endeavor, is heartening. I’d be delighted to see more animated superhero films of this quality.

(And, yes, nerds, before you bring it up, I know all about the DC animated track of films. But inasmuch as the one of those that’s received the widest theatrical distribution was Teen Titans Go! To the Movies — which I enjoyed, incidentally — let me say we’d be comparing apples and oranges, cinematically speaking.)

4. I liked that this film (and its filmmakers) were aware of the universe in which we, the audience, live in, i.e., one in which the “superhero origin story,” both in a general sense and how it relates to Spider-Man in particular, is understood and is mostly passe. Spiderman: Homecoming, the most recent live action Spider-Man film, dealt with this by not dealing with it; it knew we knew about Uncle Ben and so on and so forth. Spider-Man: Into the Spider-Verse can’t just dispense with the origin story, because it actually has to introduce not just Miles Morales as Spider-Man but several others as well. But it solves the problem compactly and cleverly and, again, in a way that works best in an animated medium. In a general sense, this film is knowing: Knowing what we know about Spider-Man and superhero films, knowing what we’re tired of, and working with that to give us the information we need without making a big deal about it.

5. Going into this film, I was aware of Miles Morales as Spider-Man in an abstract sense, but hadn’t read the comics he’d starred in, or knew much about what distinguished him from either Peter Parker or that version of Spider-Man. To that end I thought this movie did a very fine job of setting up all the ways that he is different from, and all the ways he parallels, Peter Parker and that particular iteration of the web-slinger. I really liked his relationship with his family, and how the film made him into an awkward teen but not a loser — Miles Morales has to learn how to be in the world not just as Spider-Man but also as Miles Morales. That’s a lot to convey, and the film does a pretty admirable job.

And while other people will better essay Miles’ ethnic background and why it’s important it’s portrayed in film, I’ll just say I’m here for it, and for a view of New York City — and superhero-ness — that’s not just centered on the white experience. In a larger sense, it’s not for nothing that two of 2018’s best films center on a black Marvel superhero, and that those two black superheroes have substantially different challenges they have to deal with, in the course of their respective films.

6. I said on Twitter last night that I thought Into the Spider-Verse might be the best Spider-Man film out there. In the cold light of the next morning, I will continue to stand by that assessment, with the caveat that it’s possibly not the best first Spider-Man movie to watch, since it traffics in the audience’s built-in awareness of who Spider-Man (the Peter Parker version) is and what he’s been through. Without getting into spoiler territory, I think it’s accurate to say that Into the Spider-Verse assumes that you’ve seen the first two Sam Raimi Spider-Man films at least. I figure that’s a not unreasonable assumption.

(Also, it appears to largely ignore the third Raimi movie, the Spider-Man films starring Andrew Garfield, and for the moment at least does not seem to have much to do with the Tom Holland-era idea that Spider-Man is part of a larger Marvel universe, so no palling around with Iron Man or Captain America. This is all fine and I didn’t miss any of it, especially since delving into the “Spiderverse” meant there was more than enough going on anyway, superhero-wise.)

Into the Spider-Verse is arguably the best Spider-Man film; I also think it’s pretty high up there in the rankings of superhero films in general, and it’s also among the best films of the year. I realize that last bit might be contentious, since an animated superhero film does not have the same gravity as, say, Roma. But here’s the thing. Of any film, ask: What is it, in itself, and how well does it realize being that thing? Spider-Man: Into the Spider-Verse is a Spider-Man film, a superhero film and an entertainment. As all of those things, it excels. As I said earlier, it’s hard to see how it could be a better version of itself than it is. And in a year where Black Panther can (and should be) seriously considered for Best Picture accolades, I think it’s pretty safe to argue that another, different superhero film that also hits all the marks it sets for itself can be considered one of the best films of 2018 as well. Again, it’s a craftsmanship thing.

28 thoughts on “Thoughts on Spider-Man: Into the Spider-Verse”