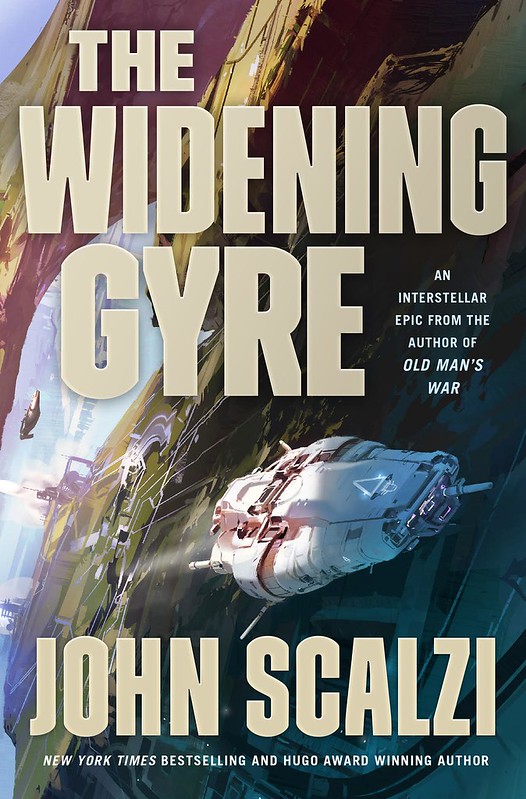 Hey, remember when The Consuming Fire was supposed to have been titled The Widening Gyre? It turns out that both my US and UK publishers kind of hated that title (not the least because no one could agree on how to pronounce the word “gyre”), so we changed it. I have to say now I much prefer the newer title, in no small part because I was able to slip it into a major character’s big speech, which gave the new title that “hey, we meant to do that all along” vibe. Which I guess is one nice thing about having turned in the manuscript at the very last possible instant. It all worked out pretty well in the end.

“It worked out pretty well in the end” is a theme for me and 2018, I have to say. Once again, it was a year that wasn’t great for the world in general sense, and I am truly sorry about that. But for me, it cruised along pretty nicely. Some of the highlights for the year, both career and personal:

1. Head On was released in April and hit the New York Times bestseller list, which was nice;

2. The Consuming Fire was released in October and also hit the New York Times bestseller list, which was nice too;

3. The Dispatcher, released two years ago, showed up on the inaugural New York Times audio fiction bestseller list as well, so, again: Nice! This means I had three New York Times best sellers in a single calendar year, which, you know. That’s pretty nifty. I’m not going to expect that to be an annual event, but I’m going to enjoy it in the moment. These books also showed up on other bestseller lists too. It’s nice to have evidence people are buying one’s work.

4. Virtue Signaling did not hit a best seller list of any sort, but it did sell out of its entire hardcover print run, before its official release date (which will be, uh, next Monday), and the eBook version seems to be chugging along nicely. Virtue Signaling’s release means it’s a three book year for me — six if you count the limited edition of The Human Division and the paperback releases of The Collapsing Empire and Unlocked, eight if you count my appearances in the Robots vs. Fairies and Resist anthologies — which is a pretty decent number of books out in a calendar year.

5. The Collapsing Empire won the Locus Award for Best Science Fiction Novel, which was pretty great, and was nominated for the Hugo Award as well, coming in second to NK Jemisin’s The Stone Sky, which is also pretty great and I think the correct relative placement of those two particular novels. Head On also made the final round of the Goodread Choice Awards in the science fiction, which was won by VE Schwab this year, which pleases me because she’s pretty great.

6. The various film/TV productions are progressing nicely, some more than others, which is the nature of this particular beast.

7. I got to travel quite a lot this year and see a bunch of friends, which made me happy.

8. I remained married to the most fabulous person in the world, which also made me happy.

9. My kid interned on Whatever, which I really enjoyed, and which I think was useful for her.

10. Once again, I was not consumed either by fire or bears.

So, thanks, 2018! You did well for me. Sorry about all the rest of the year not related to me, but, well. I’ve been working on that, along with lots of other people, and we can hope 2019 will see things improve a bit.

Speaking of 2019, what’s on the professional agenda for that upcoming year?

1. The sequel to The Dispatcher, provided I finish it soon (and it will be finished soon! I swear).

2. Another book, most likely a collection, the details of which are to come later.

3. The paperback releases of Head On and The Consuming Fire.

4. Re-releases of Agent to the Stars, Fuzzy Nation and The Android’s Dream, with nifty new artwork and introductions by me.

6. A short story (with accompanying animation) that will appear in The Verge in January.

These are all the solid things. Beyond the things that are entirely solid I have a bunch of stuff that’s in various stages of negotiation and/or development, which I hope to be able to share with you soon(ish). When I can share them will be in no small part dependent on other parties. But you’ll know when I know.

But what about a novel? I hear you ask. Well, I’m writing one in 2019: The Last Emperox. Provided all the production marks are hit, it’ll be out in the first half of 2020. Oh, don’t give me that look. You got two novels in 2018. And you’ll get The Dispatcher 2 in 2019. You’ll be fine. Other people are writing novels in the meantime. Read some of those while you wait.