For 2019 I didn’t do any resolutions, because over the course of time I can’t say that I’ve found them particularly useful, either as an encouragement or as a goad. For me, the way it usually works is that I decide to do things, or I don’t, and my behavior changes accordingly.

With that said, in 2018 I think I ended up doing myself a real disservice with regard to how I was spending my time. I wrote about writing The Consuming Fire in two weeks, which sounds impressive except for the fact I noted I didn’t really have much of a choice in the matter, because my time management had not been great. So when unavoidable issues came up, whether positive or negative, I didn’t have enough margin in my schedule to compensate. Life comes at you fast and sometimes no matter what you just have to deal with it. At the same time, better discipline with one’s time often means the difference between being able to manage what comes at you, and just having to push through at substantial overall cost.

The other thing I noticed last year was that I wasn’t very happy with how I was spending a lot of my time, or more on point, how I was wasting it; I had a few too many days just sort of hitting refresh on social media even though there was nothing there I was particularly interested in seeing. I love hanging out on Twitter and chatting with friends, but much of what I was doing wasn’t that. It was me just staring into Tweetdeck, watching people get worked up about things that didn’t necessarily have to do much with me. I wasn’t reading as much, or playing games, or watching movies or TV — relaxing things that generally made me happy. I don’t think I was on social media more last year than I was in previous years, on balance. I just think for some reason it contributed to me doing other things less. I think it’s an attention span issue.

One more thing: I’m going to turn 50 this year. I’m not using this occasion to freak out about my mortality or my place in the world, since I’m pretty comfortable with who and what I am, and don’t really mind the fact I’m going to die (although hopefully not, like, soon). I am, however, thinking about how I’m using my time, and how much I want to use the increasingly limited amounts of it that I have, on things that aren’t either useful or making me happy. I’m increasingly finding that just staring into the computer when I’m not actively writing or engaging with friends isn’t actually enjoyable or making me happy.

With that in mind, I’ve decided to do a few things, and I’m going to tell you now about three of them. The first is something I was already doing to some extent: blocking social media between 8am and noon when I’m at home and having that as my prime writing time; that is, when I’m writing the stuff I’m being paid for. The second is relieve myself of the idea that there is such a thing as multitasking, and to focus on doing one thing at a time. So, when I’m writing (say) a piece on Whatever, not to be checking Twitter or Facebook while I’m doing it, which is really easy for me to do and also really distracting.

The third is simply to ask myself “is this the best use of my time” when I’m aimlessly sitting in front of my computer. Sometimes it is! Sometimes “aimlessness” is me doing nothing in order to recharge my brain. But often it’s not. And when it’s not, I should be doing something else — reading a book or writing something or actually walking on the treadmill or making Smudge chase a red laser dot, or whatever. I do have things I want to do, that aimlessness in front of the computer isn’t helping with. I’m gonna be 50. I’m not going to regret not sitting aimlessly in front of the computer, but there will be other things I’ll regret not doing instead.

These aren’t resolutions and I’m not going to beat myself up if I don’t perfectly execute them. What they are, is me tweaking my process to make me happier with how I’m spending my day-to-day life. If they work, great. If they don’t, I’ll try something else instead. As I believe I noted elsewhere, the process isn’t the goal, the goal is the goal. And the goal here is to be happier with how I spend my time.

Will that make a difference for you from your vantage point? Probably not; again, what you’re mostly seeing on your end is output, not process (and I’m pretty sure you don’t want to see the process, as it mostly involves me in a bathrobe). The thing is, and I hope you understand, this isn’t about you. At least, not very directly. But hopefully in the longer run we’ll all see the benefit of me making better use of my time. We’ll see how it goes.

For those of you casting about for things to nominate for various awards this year, here’s what I have that’s eligible.

“Regarding Your Application Status” (May 2018; published at Whatever/Scalzi.com)

Although Athena and I did a podcast last year, it’s not eligible for the Best Fancast category since we only did three episodes.

That said, and speaking of Athena, as my intern she did quite a bit of writing about science fiction, fantasy and other material of fandom interest (her posts from the summer are here). She was compensated, because I believe in paying people for their work, even (especially) interns; nevertheless I do believe she is eligible for consideration for the Best Fan Writer Hugo category, if after reading her material you believe it merits such a nomination.

(Indeed, and of course, only nominate anything for an award if you genuinely believe it merits a nomination, including obviously my own work. I’m okay if you look at what I’ve written this year, and then look at other work you read and go, “yeah, I think I’ll nominate that other stuff.” It happens! I won’t think it means you didn’t like what I wrote; it just means there’s a limited number of things you can nominate in any given year (and if in fact you didn’t like what I wrote — well, sorry about that, I guess).)

Happy reading and nominating this year! 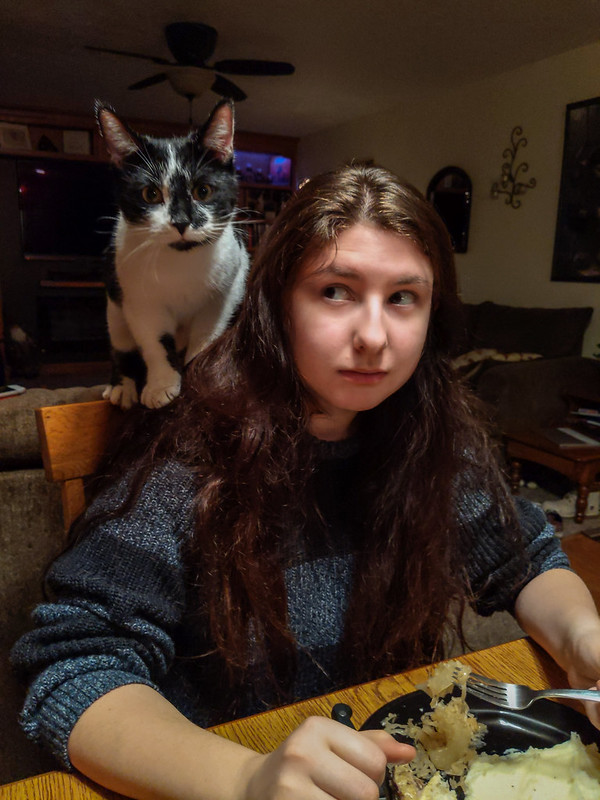 Yup, this pretty much covers it, I’d say.