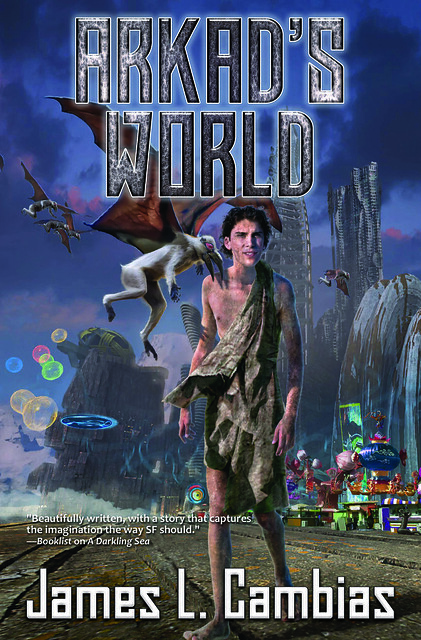 Can a “big idea” be a bad idea? Author James L. Cambias (who has been one of my favorite writers since we were both at the University of Chicago together) grapples with this problem, and how confronting this issue made his new novel Arkad’s World all the better.

“It’s such a fine line between stupid and clever.”

Sometimes Big Ideas can be dangerous.* My new novel Arkad’s World was almost killed by a Big Idea.

The book is (in part) a love letter to boys’ adventure stories. As a tip of the hat to one of the greatest adventure stories, Robert Louis Stevenson’s Treasure Island, I wanted to include an ambiguous villain — a Long John Silver type character, who would seemingly befriend my young hero Arkad, while pursuing a selfish hidden agenda.

My incredibly clever Big Idea would be that this slippery character would never actually say anything true. His statements would all be sarcastic, or jokes, or rhetorical questions; and when he actually seemed to be speaking in a straightforward manner he was lying. This pathologically untruthful villain would get hold of Arkad, and the two of them would search for a lost spaceship containing Earth’s lost cultural and historical treasures. Meanwhile, a seemingly menacing rival team (who are of course actually the good guys) pursue them and ultimately Arkad realizes he has been duped.

Okay, here’s the problem. My young hero is naive. He knows a lot about the world he lives on, but almost nothing about what’s going on elsewhere in the Galaxy. He doesn’t know how important the lost spaceship is. He doesn’t know the political background.

And the only character who can tell him all that important information is lying all the time. Which meant the reader can’t find out any of this stuff either.

For about six months in 2015 I bashed my head against this project, until I finally realized that my clever Big Idea was actually a really bad Big Idea. It was so clever that it crossed the line into Stupid. I had to scrap most of what I had written, redo my outline, eliminate my unreliable character, and start over.

The delay meant that I didn’t finish the manuscript until the end of January, 2016. I was about a week away from submitting it when I got the news that David Hartwell had died.

But because of my stupid clever Big Idea, he never saw Arkad’s World. I felt really bad about that.

His death also meant an emergency reorganization at Tor Books. Without David as an advocate, Arkad’s World kind of fell through the cracks, and the company declined to publish it.

In the end, it was someone else’s Big Idea — an absolutely crazy-sounding Big Idea — which finally got Arkad’s World published. In the Fall of 2017, at Gregory Benford’s urging, I went to the Tennessee Valley Interstellar Workshop in Huntsville, Alabama. (You can read my account of it here.) The TVIW is a conference dedicated to actually building and launching an interstellar probe to Proxima Centauri by 2060. It sounds mad, but right now I wouldn’t actually bet real money that it won’t happen. The people involved in the project are very smart and very dedicated, and at least a couple of them are very wealthy.

On the third day of the conference I played hooky along with some other science fiction writers — including Allen Steele, Sarah Hoyt, and Toni Weisskopf, the publisher at Baen Books. We went on a tour of the Marshall Space Flight Center, including a visit to the old Saturn rocket engine test stand from the Apollo program. Ms. Weisskopf and I were both disinclined to climb the rickety-looking stairs all the way to the top, so we had a little time to chat while the others made the ascent. I told her about Arkad’s World, and she asked to see it.

Pitching a science fiction novel to an editor when you’re halfway up a rocket test stand is pretty damned cool. I think the Rule of Coolness forced Ms. Weisskopf to buy the book. Which she did. And now it’s out, so everyone can see the Big Ideas I didn’t have to throw out.

*See the history of the 20th Century for examples.