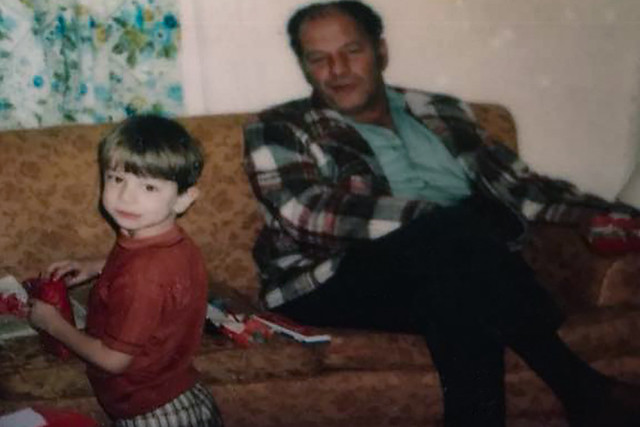 My mother posted this on Facebook a few days ago, and I thought I’d also post it here so it didn’t get lost down the Facebook memory hole: This is a picture of me and my grandfather, Michael Scalzi. I’m guessing I’m about four or five in that photo, so this would be from 1973 or 1974, and I’m guessing that it’s in my grandfather’s home in Covina, California. Judging from the presents, it’s also on or near Christmas day. I was and remained very fond of my grandfather, to whom I was closest to of all the surviving grandparents at the time (my maternal grandfather had passed away before I was born).

I don’t really have that many pictures of my grandfather, so it’s lovely to see him. He looks pretty much as I remember him, albeit slightly younger here; in this photo he would be only a few years older than I am. That’s a hell of a thought. There’s not a whole lot of family resemblance between him and me, I’m afraid; physically I take much more after my mother’s side of the family than my father’s (this is flipped for my sister, who looks much more like the Scalzi side).

It’s a little strange to realize how much of my grandfather at this point exists only in my memory. As I mentioned, I don’t have many pictures of him and he wasn’t a writer or actively creative, so I don’t have anything like that. If nothing else any future grandchildren of mine will not lack for supporting evidence of who I am or what I thought. I would like to have more mementos of my grandfather, of course, but I do have to say I don’t feel a lack because I don’t. He’s where I can find him, and will always be.