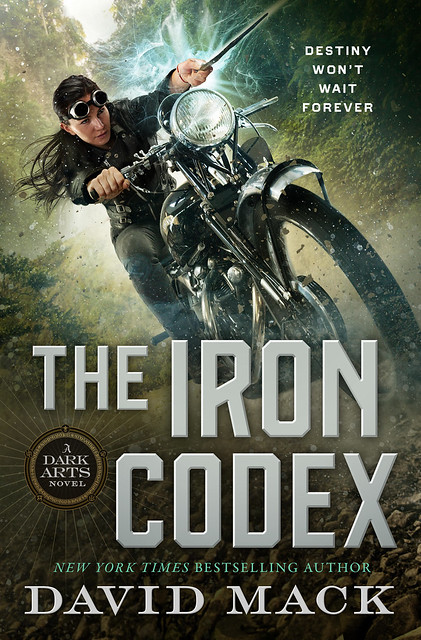 Author David Mack knows what you expect out of a book series. But with The Iron Codex, he’s making the argument that you should sometimes get something else than what you expect. Let’s read his thoughts on why this is.

In the publishing industry, there are certain expectations that govern how a new book series is launched, promoted, and sustained. The Iron Codex was written to defy those expectations.

One of the most common bits of received wisdom that is imparted to authors when they embark upon the creation of a series of novels is that, while each book must tell its own story, each entry in the series should be very much like all the others under the same banner. They should share a core cast of characters. Employ the same settings. Evoke consistent themes and tones. And, above all, belong to the same easily defined and marketed genre or subgenre.

For example, if one launches a series whose first book concerns a grouchy, ghost-talking private detective solving a murder in Victorian London, one’s publisher and readers are likely to want the second book to feature the same main character, supporting cast, setting, and tropes. Moreover, it’s reasonable for them to expect that its plot will concern another mystery to be solved. Perhaps another murder, or maybe something else, just for variety. But the essential reading experience of each book in the series should be very much like those that preceded it.

It’s a logical and reasonable approach to crafting a series. It has a long track record of success.

It also was exactly what I did not want to do when I created my Dark Arts series.

I created Dark Arts to be something different. Its first book, The Midnight Front, was plotted and planned as a World War II-era secret-history war epic about demon-powered sorcerers waging secret campaigns behind the scenes of the real war’s events. But I had no interest in creating a series that simply hopscotched from one war to another. I didn’t want the progression of the series to be “World War II, Korean War, Vietnam War, Iraq War, etc.”

What I’d envisioned was a series that would follow a core group of sorcerers through different eras and regions of 20th-century geopolitical history, by telling stories best suited to those times and settings. Consequently, book two of Dark Arts is a radically different style of novel from its predecessor. Instead of another war epic, The Iron Codex is a Cold War-era spy-thriller.

Just to increase my difficulty level, I decided that book two should also have a different main character than book one; I wanted the female lead from book one to take over as the heroine. The Midnight Front had been about Cade Martin’s journey from naïveté to jaded cynicism. I wanted The Iron Codex to chronicle Anja Kernova’s path from self-doubt to self-knowledge.

Of course, switching the main character from one book to the next has been done by other authors as they developed a series. (I’m looking at this blog’s esteemed owner’s own Zoe’s Tale as a sterling example.) But often those series were more consistent in style, genre, and setting than Dark Arts promises to be.

That’s not to say there are no through-lines connecting the stories that constitute my series. The magic system, which was extrapolated from the rituals of Renaissance-era ceremonial magic, is an essential element in every book. Subplots from book one are continued in books two and three (the latter of which I am still revising for final delivery to my editor), and my supporting characters have their own arcs that follow them through the series.

Will those links be enough to keep readers from abandoning my series en masse when they realize that each new book will be a different narrative flavor? Book three is going to be a paranoid conspiracy piece about betrayal, and I have notions of making book four a high-velocity heist thriller. Of course, it’s possible book four will never happen, because I might have just committed career suicide with this unorthodox approach to my series’ genre identity.

There are a lot of reasons why this experiment might not succeed. I knew that was a risk before I started. But on some level I genuinely believe that, just as I find it more interesting to write a series that changes up its approach with each book, there is an audience that will appreciate and celebrate it. My acquiring editor certainly believed it to be a worthwhile endeavor.

If that turns out not to be the case, future generations of writers will likely use my name in whispered tones as a caution to others. But even if this experiment fails to pan out commercially, I will defend my creative choice. (Though maybe not my business savvy.) I think the Dark Arts novels are fun and unlike much else out there. I’ve enjoyed writing them, and I can’t imagine having taken any other approach to telling the tales of these characters. Now, however, my role is done, and all I can do is hope that the books find their readership via word-of-mouth.

And so I cast my peculiar narrative bread upon the waters of public opinion … and hope that my reward proves to be more than just a handful of soggy gluten.