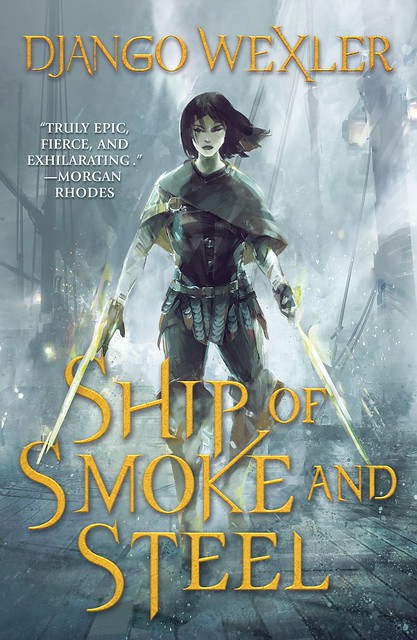 Every hero has a journey — or so it would seem — but does that have to be the journey we expect them to take? Django Wexler asks that very question in this Big Idea for his new novel Ship of Smoke and Steel.

There’s a story we like to tell in science fiction and fantasy: call it the “journey to power”.

The parameters of it are so obvious they almost don’t bear repeating. Our protagonist (orphan farmboy, penniless waif, lowly ensign) begins in a position with no power or authority. Over the course of the story, they gradually improve their lot, often as a side effect of pursuing other, more altruistic goals. The farmboy becomes a master swordsman, the waif leads a revolution against the oppressive state, the ensign assumes command of the starship in a crisis. By the conclusion, they can look back from the dizzying heights and reflect on how far they’ve come, and perhaps laugh about how provincial concerns like local bullies seem on the eve of the Final Battle.

I’m being reductive, of course, but this thread or something like it is at the root of many, many SFF narratives, and for good reason. It’s immensely satisfying — the underdog who we identify with almost automatically slowly getting the upper hand. Often there’s a contrast between those in power at the start of the story, who abuse their authority, and the hero, who wields power justly and honestly. It’s a story most of us can identify with, because almost everyone knows what it’s like to begin at the bottom of some field, and we can all enjoy the fantasy of becoming powerful enough to give petty tyrants their comeuppance.

Let me stress that this is a good story, which is part of some of my absolute favorite works. It’s in Harry Potter, The Wheel of Time, and Star Wars. (The journey to power overlaps, but is not identical to, the more familiar Hero’s Journey of Campbellian fame.) I’ve used it in my own works, many times. Winter’s story, in The Shadow Campaigns, follows her journey from lowly ranker through sergeant, regimental officer, and finally commanding general, from the front lines to the heights of power.

In my middle-grade fantasy, The Forbidden Library, the protagonist Alice becomes a powerful Reader over the course of the series, accumulating contracts with magical creatures than increase her repertoire of abilities. In fact, one of my favorite moments in that series comes in the fourth book: having spent nearly all her time since encountering magic in strange alternate worlds battling monsters, Alice finds herself spat out, alone and penniless, on a Florida beach. (The story takes place in the early 1930s, so no cell phones or internet to the rescue …) She makes her way back to her home in Pittsburgh, and in the process discovers just how powerful her abilities make her in the “normal” world — she can go anywhere, do anything, and no one stop her. I like it as a moment of reflection, that pause just before the summit where we look down at how far we’ve come.

Ship of Smoke and Steel, my new YA fantasy, has a very long history in my archives. It was originally called Soliton (the name of the colossal ghost ship that is the primary setting) and it made good use of the journey to power. Our protagonists (originally there were two of them) were poor orphans, unaware of their magical abilities, who were abducted to be given to Soliton, which collects mage-bloods for mysterious reasons. Once aboard, they had to make their way in the dangerous, lawless society of the monster-haunted ship, gradually uncovering their own power along the way.

That first attempt never quite worked out — it was part of a somewhat ill-conceived Massive Worldbuilding Project, the sort of thing that starts with “Year 0: The World is Created by The Gods” and pages of maps on millimeter graph paper, and it collapsed under its own weight — and the ideas for Soliton lay dormant in my files for many years. (Writer pro tip: never throw anything away.) When I got the chance to return to them, after more than a decade and nine novels, I decided to take a different approach. (n.b. different as in “different from what I had done before” — I certainly have no claim to originality in the genre!)

Isoka, the protagonist of Ship of Smoke and Steel, is a powerhouse from the beginning of the story. She is an adept of Melos, one of the Nine Wells of Sorcery, the Well of combat and war, which grants her energy blades and nearly impenetrable armor. When we first meet her, she’s an enforcer in a criminal organization, laying waste to a gang of rivals. And while she learns a few new tricks over the course of the book, by and large this is not a story about her coming into her power — she’s already done that.

Instead, Isoka’s story is what you might call a journey to empathy. Apart from a younger sister, to whom she’s obsessively devoted, Isoka starts the book with a callous disregard for the feelings or welfare of others, happy to slaughter her way to the solution of any problem. Soliton, when she’s shanghaied on board, presents her with a situation that can’t be solved by cutting it to pieces, both physically (it’s full of giant monsters and other adepts) and emotionally (much to her surprise, she falls in love with a princess). Her struggle with this is the heart of the book.

Why do it this way? Some of it is just how the characters came to me, of course. Some of it, as I said, is just wanting to try something I haven’t done before. And I think some of it comes from the outside world — this book was written in 2017, and with times being what they are, it’s the journey to empathy that really speaks to me right now. I had a lot of fun writing it, and I hope it speaks to all of you, too.