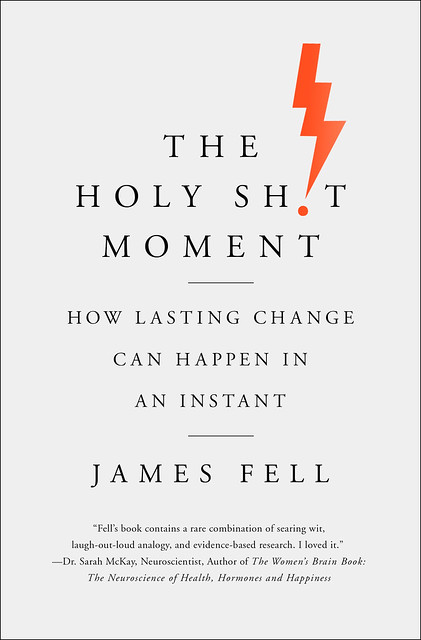 In today’s Big Idea, James Fell explains the title of The Holy Sh!t Moment, and how it perfectly encapsulates not just the book, but the process of making the book itself.

I wasn’t keen on the title.

The sample chapters and proposal were ready. We just needed a name.

“Come up with a list of about ten and send it to me,” my agent said.

It had been near the bottom of the list. “Really? I’m not sure about that one.”

“We don’t have to be married to it, but publishers will like it so it’s good for pitching. It describes perfectly what the book is about. We have time to think of something else.”

But we never did. My agent was correct that publishers liked it. Raved about it, in fact. So did most everyone I told the name to, so long as they weren’t the type to clutch pearls over a swear word.

I wanted to branch out. Also, I wanted more fame and fortune. I’d been writing about health and fitness for seven years. I was a regular in the Los Angeles Times and the Chicago Tribune, despite being a Canadian living in Canada. I had a reputation as a no bullshit guy, a myth buster, a fan of science and evidence.

My first book was a science-based weight loss guide published by Random House Canada. It did well up here, but we couldn’t sell it to a big house in the U.S. My agent explained why: “The United States is ground zero for stupid diets.”

Despite having ample reach in the U.S. via writing for a variety of American publications, and a popular blog and sizeable social media presence, the New York houses weren’t interested in a realistic and moderate approach to losing weight and getting in shape. Keto was the new thing. If I wrote about how cutting sugar cured cancer, I’d get a book deal.

When it came to losing weight, I’d written a lot about motivation. There are more ways to transform your body than there are beers in a Munich autumn; I’d focused on the critical component of inspiring movement and better eating.

After a conversation with my agent, I realized if I could motivate people to lose weight and keep it off, I should be able to motivate them to do other things. Science-based motivation though. Not that cheesy “rah-rah you can do it!” ad nauseum crap or someone proclaiming to have the “secret”. I knew there were good self-help books that didn’t devolve into pseudoscientific dumbfuckery or motivational Pablum. I figured I could write one of the good ones.

But I needed a hook, so I rode my bike.

My Argon Krypton is my idea machine. For three months, I rode Calgary’s ample pathway system, blasted Rush on my iPod, and let my mind wander.

On one such ride, I saw a man running toward me; he wore a Boston Marathon shirt. I smiled and thought, I did that.

It launched a cascade of remembrance, because I’d been such a terrible runner in my youth. Gym class was the worst part of my day, and I wondered what changed. This next part will seem like bragging, because it is.

How did I go from an unathletic, unpopular, overweight guy who was flunking out of college to getting two master’s degrees, qualifying for the Boston Marathon, having millions of people read my work, and marrying a hot doctor?

Change happened in the space of a few seconds where I woke up to the reality of my life. I lamented the notice from the University of Calgary that said I was being kicked out due to my poor grades. I was distracting myself from my troubles with the school newspaper and saw a quote from, of all people, folk singer Joan Baez.

“Action is the antidote to despair,” it read.

I don’t think what most people need to change is only to read some inspirational quote. But if it hits at the right time, it can open a new window in a person’s mind. In a flash, I realized my situation was of my own making, and I had the power to fix it. I’d been a lazy man, now suddenly inspired to take action to make things better. Awash in the relief of seeing light at the end of the tunnel, it became the moment that split my life in twain, dividing it into “before,” and “after.”

It was a deeply emotional sensation that put my motivation into permanent overdrive. Recalling the experience on that bike ride, I wondered, What is the science behind such an event?

I screeched my bike to a halt and almost fell over due to neglecting to unclip from the pedals. I pulled out my phone and began to search popular books on life-changing epiphanies. All that existed were collections of anecdotes; Chicken Soup for the Soul kind of thing, not science. I’ve had two stories published in those chicken soup books. Don’t hate.

I typed into my Facebook page a post asking people if they’d experienced a sudden epiphany that transformed their lives, then hopped back on my bike and rode home.

Before getting in the shower I checked Facebook. The comment field had exploded with inspirational tales of life-changing moments.

My agent liked the idea. I dug into the research, interviewed dozens of world-renowned psychologists, and filled it with stories of people whose sudden “Holy shit!” moments had changed their bodies, helped them beat addiction, sent them back to school or on a new career path, brought them back from the brink of suicide, realized their true gender, even inspired them to change the world.

And, science fiction fan that I am, I peppered it with references to both Star Trek and Star Wars. There is a chapter on religious epiphany; as a nonbeliever I struggled to choose an opening quote. I finally decided on Darth Vader:

“I find your lack of faith disturbing.”