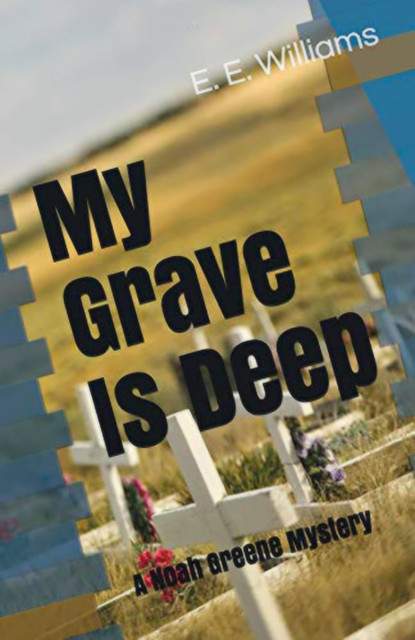 It’s always delightful for me when I learn a compatriot from my journalism days branched out, as I did, into the literary world. In this case, it’s E.E. Williams, with whom I shared a newsroom twenty five(!) years ago, writing mysteries, of which My Grave is Deep is the latest. In this Big Idea, Williams delves into the making of his mysteries, and why they take the time they do.

It took me 25 years to write my first mystery novel, “Tears in the Rain,” so titled after the famous line uttered in the movie Blade Runner. It took another 17 years to write the second book, “Tears of God,” and another five to complete the third, “My Grave Is Deep,” which was recently published on Amazon.com. All three feature amateur detective, Noah Greene, who sacrifices everything dear to him to follow a dream of becoming a private investigator.

Why it took that long to write that first book is a mystery in itself because from the time my father handed me a book – a thick tome about a black stallion in the Arabian desert, the name of which has vanished on the winds of time – and told me to read it, it was my life’s goal to be an AUTHOR. I put that word in caps because I didn’t just want to write books. I wanted to be famous, and rich, and so successful Stephen King would call me for tips.

I had this vision in my head that I would live in an A-frame house in the Colorado mountains during winter, where I would hunker down over my typewriter (yeah, that should tell you just how old I am), pecking out my next bestseller, and then in spring, take the manuscript to my publisher, drop it off, pick up a fat paycheck and catch a plane for Europe where my wife and I would travel and eat at the world’s best restaurants, and where I’d be recognized and asked to sign autographs for my adoring fans. I’d return to the states just as the latest book hit No. 1 on the New York Times bestseller list and do a book tour that would take me from the East Coast to the West, and sell the movie rights to Steve McQueen or Paul Newman, before returning to Colorado and another winter of writing.

It was when I worked at the Miami News that I decided to get serious about writing the book I always wanted to write – a mystery. A surprise, that. After reading the book my father gave me, I started a strict regimen of Sci-Fi novels. I devoured everything written by Arthur C. Clarke, and Ray Bradbury, and Robert Heinlein, and Ursula K. Le Guin. (Now, of course, I devour everything written by Scalzi, James S.A. Corey and Richard K. Morgan.) I thought if my dream were to ever come true it would be writing Sci-Fi. But … before I hit the shift key for the first time, I read an Esquire Magazine piece that stated some of the best writing being done by novelists was in the mystery genre. They recommended Raymond Chandler and Dashiell Hammett, Ross Macdonald and John. D. MacDonald.

It was John D. MacDonald’s Travis McGee series that I first picked up. Travis lived on a houseboat, The Busted Flush, and did investigative jobs for hire. There was a color in each of the book titles. “The Deep Blue Good-by.” “The Girl In the Plain Brown Wrapper.” “Nightmare in Pink.” “The Dreadful Lemon Sky.” I was hooked. I devoured all 21 McGee novels like a starving man. Then chomped down Chandler, followed by Hammett, the other Macdonald and Robert Parker. I was fascinated by the stories of world-weary detectives overcoming long odds to turn back evil. That was the kind of book I wanted to write.

And so, I started a book that didn’t even have a title because Blade Runner was still off in the future. I wanted a McGee-like amateur hero, someone who loved movies with the same sort of passion as I did, and who lived in Miami because, well, that’s where I lived.

I dove into the book with gusto, determined to make it a bestseller. The gusto didn’t last long. I had a family – a wife and young son. Could I afford to take a risk on writing books, I asked myself. I was good at newspapering. What if I failed as a novelist? What if I failed my family?

So I put my energy and focus on writing about sports stars, and actors, and yes, other novelists. I did it well enough to keep getting promoted, a velvet fist if there ever was one. I bounced from one paper to another, – 14 in 42 years – working at some of the country’s biggest and best, including the New York Daily News, the Cleveland Plain Dealer and the Fresno Bee (where I met the estimable Mr. Scalzi).

Oh, it wasn’t as if I didn’t work on the book. I’d write for a day or two, sometimes three, and put it in a drawer and go months before starting again. By which time, the thread of the plot was lost, requiring a do-over. I did a lot of do-overs. Then I lost the manuscript in one of those 14 moves (remember, everything was on paper, not in a computer). Began again. Moved and lost it again. My wife, once threw it out in the trash, something I prefer to chalk up to as a tragic mistake rather than a comment on the book’s quality.

The years stacked atop one another and when I looked up, 25 of them had passed. I told myself it was because I had that day job. And yet, so many of my friends and colleagues were successful novelists – John, of course, and Sherryl Woods and John Katzenbach – and they all had day jobs just like me. I was embarrassed by my own inability to do what they’d done. I decided it was either do what I always dreamed of, or stop dreaming.

Eventually, I found the will and discipline to drag “Tears in the Rain” over the finish line and get it published.

Still, I loved the characters I’d created and gave it another go with “Tears of God.” It’s a better book and only took me 17 years to write.

Nevertheless, I continued to enjoy writing and seeing my characters grow, so out poured (can something that takes five years really be described as pouring out?) “My Grave Is Deep.” It is, I think, the best of the three.

If history is any indication, stardom, fame and fortune won’t follow. Regardless of its reception, I’ve started to write a fourth Noah Greene mystery and I have but one hope.

That it doesn’t take 25 years to write. Because, you know, death.

My Grave Is Deep: Amazon